One of the objectives of the NSW New Weed Incursion Plan is to assess the risk posed by suspect plant species in NSW.

Suspect plants will be subjected to a preliminary Weed Risk Assessment to determine the need for the plant to undergo the more rigorous NSW Weed Risk Management (WRM) system (Johnson 2009).

The following protocol explains the initial Weed Risk Assessment process that will be used by NSW Department of Primary Industries (NSW DPI). The protocol will be used to determine if a plant species warrants assessment by the NSW Weed Risk Management (WRM) system, or if it should be added to a Watch List.

The protocol further outlines the prioritisation of species that will be assessed by the NSW WRM system.

Each step is described in more detail below.

Correct determination of the plant species is critical before any assessment can be made. Determinations of suspect plant species are best made by sending pressed plant specimens to the NSW Early Detection Botanist. Submission of specimens is important even if the identity of the plant is thought to be certain and/or to keep records in herbaria up-to-date. The correct identification of weed specimens is an important part of the NSW New Weed Incursion Plan. 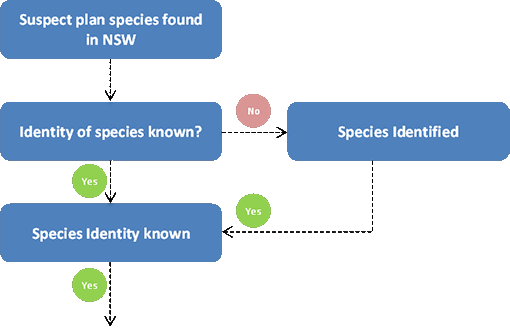 Proceed to Step 2 when species identity is known

Step 2 – Is the species weedy in the world?

The most comprehensive reference list available to determine if a plant species is weedy somewhere in the world is the Global Compendium of Weeds (HEAR 2007). Although less comprehensive, one other significant reference is ISSG (2009).

Plants that are weedy in one part of the world generally become weedy in other areas they are introduced into (Groves et al. 2001). Also note plants that are known to be invasive in their native range.

Step 3 – Has the species naturalised in Australia?

A naturalised plant can be defined as one that reproduces consistently over a number of generations without direct human intervention (and often in spite of it) (Richardson et al. 2000, and see definitions overleaf ). Invasive plant species or weeds are often a smaller subset of the naturalised plants in a region.

One of the more comprehensive references to determine the naturalisation status of plants in Australia is AVH (2009). Another reference is Hosking et al. (in prep.). There are a number of books and online databases that may provide information however.

It is important to note that a native species found outside its native range and consistent with the definition above is also considered to have naturalised in this new area.

Step 4 – Has the species naturalised in NSW, or in similar ecosystems in Australia?

One of the more comprehensive references to determine the naturalisation status of plants in NSW or in similar ecosystems in Australia is BGT (2009). Another reference is Hosking et al. (in prep.). There are a number of books and online databases that may provide further information.

All species proceeding to Step 5 are subjected to assessment using the NSW WRM system. The relative priority for assessment is determined using the following steps.

Step 5 – Is the species a known weed in at least one ecosystem in NSW, or similar ecosystems in Australia?

All naturalised plants do not become weeds (see definitions).

Only those plants that have adverse effects on primary production, environmental and/or societal values are considered weedy.

Some natural ecosystems that occur in NSW are listed below. For the purposes of this question, we consider primary production systems and areas used by humans (for example residential, service and utility areas) as land uses.

Some natural ecosystems in NSW include:

We use the term ecosystem as a partial proxy for how well suited a plant is to grow in NSW. Suitability for plant growth will be impacted by many factors including climate, soils and landuse.

If the species does not satisfy all of the conditions identified at Steps 2 – 4, it is placed on the Watch List. This Watch List will be maintained by the NSW DPI. The List will be reviewed periodically by a group of relevant experts. This review will determine if new information has become available that changes the initial assessment. A revised assessment may involve assessment using the initial WRA protocol, and the NSW WRM system.

The review order will generally depend on the date the species was added to Watch List, starting with the earliest unreviewed species added.

Various references can be used to determine answers to this question including BGT (2009).

If Yes, proceed to Step 6.
If No, species is allocated as Low priority for assessment using the NSW WRM system.

Assessment of all low priority species will occur within 6 months of completion of an initial/revised Weed Risk Assessment (as above) and will use the NSW WRM system.

The only exceptions to this will be species that have any of the following growth forms or characteristics, that is:

Each of these characteristics increase the risk a plant species poses to NSW.

These species will be treated as medium priority assessment species (see below).

Step 6 – Does the species have known impacts in NSW or similar ecosystems to NSW?

In general, the larger the size of the current or likely impacts a weed has, the more significant the weed will be. Potential impacts of a weed may include the following:

This question applies to both NSW, or similar ecosystems to NSW.

Various references can be used to determine answers to this question.

Assessment of all medium priority species will occur within 3 months of the completion of an initial/revised Weed Risk Assessment (as above) and will use the NSW WRM system.

If Yes, proceed to Step 7.
If No, species is allocated as Medium priority for assessment using the NSW WRM system.

If the species satisfies all the conditions identified at Steps 1–6 it will be placed on the list for high priority assessment using the NSW WRM system.

Assessment of all high priority species will occur within 6 weeks of the completion of an initial/revised Weed Risk Assessment (as above) and will use the NSW WRM system.

Introduced plant – any plant species that is not native to Australia.

Native plant species – any plant species that occurred before European settlement in Australia. This includes trees (saplings, tall shrubs and scrub), understorey plants, groundcover plants (any type of herbaceous vegetation) and plants occurring in a wetland (as adapted from the Native Vegetation Act 1993).

Mangroves and seagrass species (angiosperms belonging to Kingdom Plantae) are also included (as adapted from the Fisheries Management Act 1994). For the purposes of this document, a 'native plant species' also includes other marine vegetation under the Fisheries Management Act 1994 within the Kingdoms Chromista (brown algae/seaweeds) and Protista (red algae/seaweeds), despite these species not being part of the Plantae.

The above definition of a native plant species is further qualified in that these species need to be taxa that have originated in a given area without human involvement or that have arrived there without intentional or unintentional intervention of humans from an area in which they are native (Pysek et al. 2004).

Naturalised plant – a plant species (whether introduced or native) that reproduces consistently and sustains populations over many lifecycles without direct intervention by humans (or in spite of human intervention) (Richardson et al. 2000).

Taxa (plural) and Taxon (singular) – a taxonomic grouping of plants. For example, a Family, Genus (plural genera), Species, Subspecies, Variety, Form, Cultivar or Species aggregate are all examples of taxa.

Weed – a plant species (whether introduced or native) that grows in sites where it is not wanted and which usually has detectable negative economic, environmental or societal effects (adapted from Richardson et al. 2000).