Flupropanate is a soil-active herbicide that can prevent serrated tussock from germinating for 3 to 9 months in most situations. The residual effect is diminished by rainfall. One application can control germinating serrated tussock seedlings with effectiveness varying with soil type and rainfall.

Flupropanate-resistant serrated tussock was first identified on a Victorian property in 2002 and has since been confirmed in several locations from Armidale to Goulburn in New South Wales and Diggers Rest and the Rowsley Valley in Victoria.

What is herbicide resistance?

Herbicide resistance is the ability of a plant to survive and reproduce following exposure to a dose of herbicide that would normally be lethal.

In a plant, resistance usually occurs through natural selection resulting from random and infrequent genetic mutations.

The appearance of herbicide resistance in a plant population is an example of rapid weed evolution and typically develops when a weed species has been exposed to 10-20 applications of flupropanate. The serrated tussock seed bank may consist of millions of seeds of which many will germinate depending on environmental cues (Figure 1). The initial frequency of resistant genes in the population is likely to be extremely low. However, the likelihood of an individual resistant plant occurring is increased when seed banks are large. Once herbicide application has occurred, the resistant serrated tussock plant will survive the effects of the herbicide and continue to reproduce and spread the resistance (Figure 2). Resistant seed may enter a property in contaminated feed or seed, on machinery or through natural seed dispersal. Although resistant Serrated Tussock spread via these vectors, it is also very possible it can develop on farm due to continued application of flupropanate.

The implications of serrated tussock resistance to flupropanate include:

How do I know if the serrated tussock I manage has resistance?

Monitoring spray results regularly and knowing what to look for is the key to identifying herbicide resistance at the critical early stages. The best time to check spray results is between 6 and 12 months after application.

Flupropanate is a slow-acting herbicide that requires rainfall for its activation and may take as long as 12 months in some situations to kill mature serrated tussock plants. This can be confusing for land managers who forget when treatments have been undertaken. 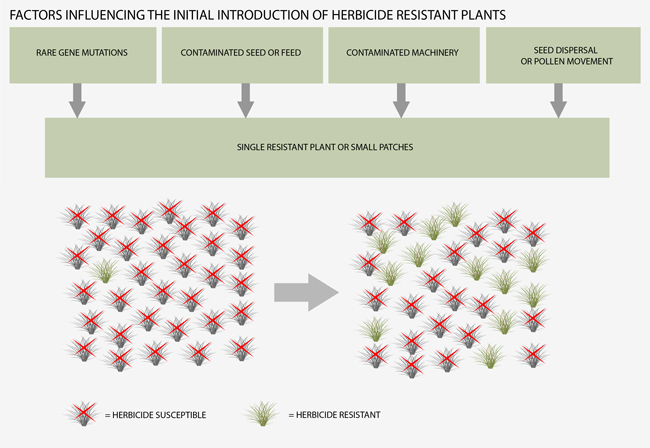