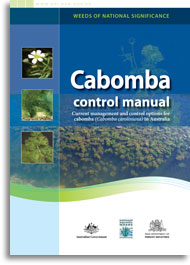 Cabomba caroliniana is a submerged aquatic weed that invades bodies of fresh water such as lakes, dams, slowflowing rivers and billabongs.

Cabomba originated in South America (southern Brazil, Paraguay, Uruguay and north-east Argentina) and is widely naturalised in the south-east of the USA.

It has become a weed worldwide, infesting bodies of water in climates ranging from tropical to cool-temperate.

It is considered a serious weed in the USA, China, Canada, the Netherlands, Japan and India and is present in South Africa, Hungary and the United Kingdom.

Cabomba has been present for over 70 years in Australia but has been identified as a significant aquatic weed only in the last 15 years (see NSW WeedWise for information about cabomba).

The National Weeds Strategy Executive Committee classified cabomba as a Weed of National Significance in Australia because of its impacts on the biodiversity and function of freshwater and riparian ecosystems, on water quality, water storage and distribution infrastructure, and on recreational and amenity values.