Be a Biosecurity Warrior

The Biosecurity Warrior delivers science-based content and messaging from the NSW DPI educational charter. The Biosecurity Warrior’s mission is to educate the community in an engaging, interactive and relevant way to help spread the message that biosecurity is a shared responsibility and we all have a role to play in protecting our economy, environment and community from pests, diseases, weeds and contaminants.

Our aim at NSW DPI is to turn every person in the state into a Biosecurity Warrior by ensuring they know how to identify biosecurity risks and take action to eliminate them.

Our environment is precious and unique Biosecurity in NSW focuses on ensuring the supply of healthy safe food, recreational access to our state's natural resources and minimising the risk to native flora and fauna.

NSW DPI works with other government agencies, industry and the community to protect against biosecurity threats and the negative impacts of animal and plant pests, diseases and weeds.

We all have a role to play in minimising biosecurity threats.

We need your help

Australia is free of many of the pests, weeds and diseases found in other parts of the world. We need your help to keep it that way - here's how you can be a Biosecurity Warrior and help to keep Australia clean, green and healthy.

Take a photo to help DPI officers with identification.

If you see something unusual or suspect an illegal activity report it to the Biosecurity Hotline on 1800 680 244 or via our online report form.

Remember - biosecurity is a shared responsibility which starts at home. 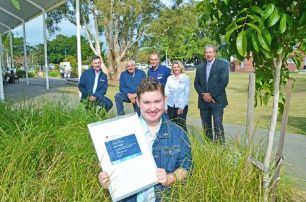 Meet Milo Yeigh, the 19 year old man who spotted a strange ant in Lismore and reported it to NSW DPI.

Milo is a self confessed ant enthusiast who discovered the yellow crazy ant infestation in Lismore central business district in May 2018.

Milo, was killing time at the Quad when he spotted the invasive ants and decided to ring the Biosecurity Hotline.

This was a great opportunity to be able to recognise Milo who essentially kicked off this all agency response, simply by being aware to his surroundings and caring enough to report it.

The yellow crazy ant is considered one of the top 100 examples of the world’s worst invasive species, with the potential to do serious damage to the local environment and agricultural production.

Because of Milo's quick action, he has helped to stop the spread of a serious invasive pest and biosecurity threat to NSW and is protecting our environment from yellow crazy ant.

A Western Sydney warehouse manager has played a crucial role in the eradication of a harmful exotic pest and was recognised for his part in protecting NSW’s $1 billion horticulture industry.

In August 2018, NSW was officially declared BMSB free and Mr Matakaiongo was recognised for his contribution.

NSW DPI Deputy Director General Biosecurity and Food Safety, Bruce Christie, said the pest could not have been eliminated without the quick thinking and cooperation of Mr Matakaiongo and his team.

“Thanks to John’s vigilance we were able to launch an immediate response,” he said.

“Reports like John’s are the biggest weapon we have in the fight to protect the NSW environment, economy and community from the threat of pests and disease,” he said.

In the United States, BMSB was first observed in 1996 and has since spread to 40 states and Canada. It has resulted in significant economic impacts including losses of up to 100 percent in Maryland peach crops.

Over winter they are known to be a serious nuisance and invade homes and indoor spaces in large numbers.

“BMSB is known to stow away in cargo coming out of the northern hemisphere between September and April,” he said.

“Anyone who works around or receives imported goods should always keep an eye out for pests, just like John and the Hager team.”

“BMSB can be found within the goods in containers, including boxes and packaging, and seek shelter in vehicles and machinery.”

More information on brown marmorated stink bug can be found on the NSW DPI website. 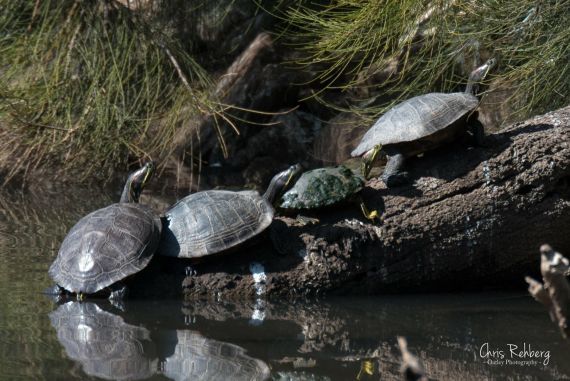 Chris Rehberg has long been passionate about our native wildlife, conservation and the environment. But he could not have known that one lunch time nature walk would see him play an important role in protecting the NSW environment from one of the world’s worst invasive pests.

As a part-time photographer, Chris was in the habit of packing his camera for work. His lunch breaks consisted of a stroll around the local lake where he indulged his passion for wildlife photography.

It was on one of these walks that Chris spotted five invasive Red-eared slider turtles basking on an island.

The Red-eared slider turtle is native to the US and Mexico and is listed by the International Union for the Conservation of Nature as one of the world’s worst invasive species. They compete with native turtles for food, nesting areas and basking sites and aggressively prey on native frogs and fish. They have no native predators and are known to harbour infection causing salmonella bacteria.

Chris had limited knowledge of native turtles but he suspected those he encountered did not belong in his local lake.

A web search and a discussion on social media confirmed he had reason to be concerned. He quickly found himself on the phone to the NSW Department of Primary Industries’ (NSW DPI) Biosecurity Hotline.

Reports like Chris’ are proving the data for NSW DPI scientists to build a better picture of the distribution of the Red-eared slider turtle species in NSW.

The data will also inform the development of management plans that will allow us to better protect our native wildlife and environment from this non-native invasive pest animal.

Claire - the fight to eradicate black knapweed from NSW 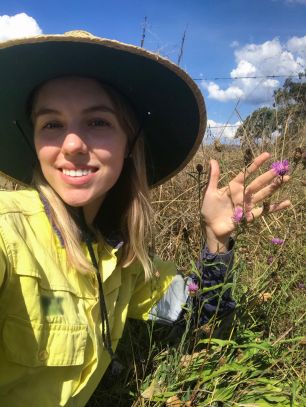 Meet ecologist Claire Lock, the latest Biosecurity Warrior who discovered the first infestation of black knapweed in the State.

Black knapweed is a serious threat that invades pastures, crops and natural areas. It can easily be spread further if seeds stick to animals and clothes, or if root fragments are carried on machinery or in soil and water.

Claire was undertaking a threatened species survey with her colleague, Liz Brown, of Eco Logical Australia, in March of 2019, when they spotted the invasive weed on the side of Bellevue Road, Tenterfield. At first glance, they didn't recognise the plant so they collected a specimen and Claire identified the plant back in the office. Claire did some further research and came across black knapweed on NSW WeedWise.

After realising the significance of her discovery, Claire collected all of the relevant information (location, reproductive state of plant, number of individuals), and made sure that the specimen she had taken for ID was double-bagged and stored securely and called the NSW DPI Biosecurity Helpline to report her suspected prohibited matter find.

Claire has been heavily involved in the response and we keep her regularly updated on the investigation.

Claire’s quick action, has helped stop the spread of a serious invasive weed and biosecurity threat to NSW.

John - stopping the spread of frogbit in NSW John and his family were visiting a cafe in Bulahdelah when his 10 year old son who is passionate about leaves and nature spotted a different looking plant growing in the water feature.

The following week when John returned back to work, he glanced at his 'A busy life' weed control calendar and recognised the feature weed for that month was the same as what they had seen at the cafe. John immediately reported his finding to the Biosecurity Helpline.

Following John's report, NSW DPI confirmed it was Frogbit - a serious invasive weed. Together with Mid Coast Council they quickly began surveillance work and developed a control strategy to minimise the spread.

Because of John's quick action the plant has now been removed from the cafe and 3 nearby ponds. John has helped stop this serious biosecurity threat to NSW. 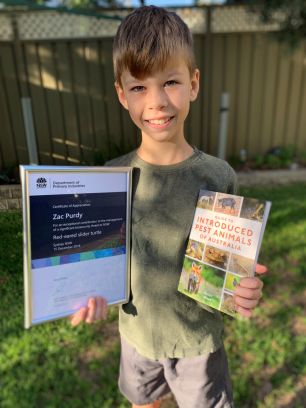 Zac Purdy is an 8 year old Sydneysider who is passionate about reptiles and the protection of native Australian Wildlife. So when some family friends posted a photo on social media of an unidentified turtle that had been found and rescued from a suburban Sydney environment, Zac immediately recognised it as a Red Eared Slider and a potentially serious threat to local Australian wildlife.

Zac and his mum provided information from the NSW Department of Primary Industries (NSW DPI) website to the family that had rescued the turtle and were keeping it as a pet, including information about the threat that the turtle could pose to the biodiversity of the local waterways if it escaped. They encouraged the family to report the turtle to the NSW DPI Biosecurity Hotline.

The family did the right thing – they called the Biosecurity Hotline and surrendered the turtle. They also provided information on where the turtle was found, enabling NSW DPI to conduct further investigations to potentially identify and control unwanted populations of Red Eared Sliders in Sydney.

NSW DPI has developed a Biosecurity Warrior Training Manual to assist children in understanding the importance of Biosecurity.

This workbook has a range of activities to identify the Biosecurity Baddies and Goodies, plus a number of actions that you can do to help the biosecurity mission.

Be a Biosecurity Warrior and defend against weeds and bugs in your own backyard.

Biosecurity in our backyard

Costa Georgiadis talks about how to tell the difference between Biosecurity Goodies & Baddies and meets Biosecurity Warriors who have exciting and interesting jobs using science, technology, research – even dogs – to stop diseases that make our people, our crops, our native animals and insects sick. Come on our biosecurity journey and learn about bees, insects, chooks, pets and how we can all be Biosecurity Warriors by looking after our own backyards.