Why exclude stock from riparian zones?

Fencing waterways and controlling stock access is often regarded as the first stage to improving the waterway. Fencing will promote: 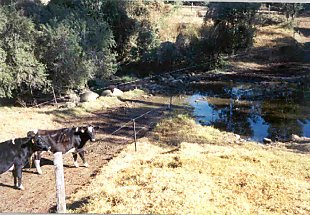 Dairy cows are able to cross the creek and drink without further damaging the riparian vegetation.

Where to put the fence: “more is better than less” 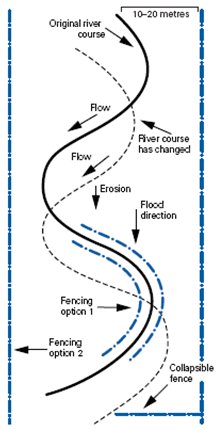 What to consider when positioning a riparian fence line

When fencing the riparian zone a variety of issues need to be taken into consideration that would not apply to the rest of the farm, including flood risk and remoteness to the site for power supplies.

Fences should be placed at least 10-20m from the current bank. The official NSW DPI Fisheries recommendation is 20m. The further away the fence is placed the straighter it can be. This requires less material and less time to erect therefore reducing the capital cost of the fence and increasing environmental benefits.
If the purpose of fencing is to provide habitat for wildlife, a minimum width of 30-50m is recommended.

The width required for a functional buffer zone is influenced by the slope, the flood patterns of an area, the amount of sediment present, the sediment type, and whether sediment containing run off will be concentrated into a channel or dispersed evenly over a large area. What type of fence?

There are a range of fencing options and the type used will depend on the purpose, topography, size of the area, soil type, flood risk, stock type, material availability and cost.

The cost of erecting a permanent electric fence is approximately half that for a conventional or suspension fence. When properly constructed and maintained electric fences are the least expensive and most effective fences for riparian zones.

Drop fences: Designed to either be manually dropped before a flood or drop from their anchor points and fold down when under the pressure of floodwater and debris.

Electronic fences: The stock wear a receiver and transmitter boxes are located to form a boundary between the riparian area and the rest of the paddock an “invisible fence”. The receivers respond by producing an audio signal and then an electric stimulus to the animal’s ear if it attempts to enter the riparian area. 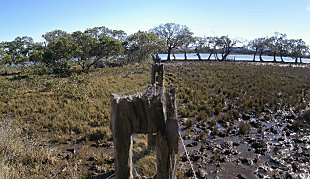