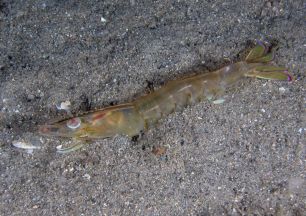 The Eastern King Prawn (EKP) fishery is one of the most valuable fisheries in NSW. Despite this, little is known about the ecology of juvenile EKP during their time spent in NSW estuaries or about how habitat change has affected productivity.

Why we researched juvenile EKP habitat

We need to understand the habitat factors that affect prawn recruitment and survival in NSW estuaries. A research study in the USA has shown that a hectare of restored wetland habitat can contribute up to 60,000 prawns to the post-juvenile population. Based on this figure, it is estimated that similar habitat rehabilitation could increase the EKP fishery yield in NSW by about 425 kg per year for each hectare of rehabilitated habitat.

Improving our understanding of the habitat needs of juvenile EKP and the impact of habitat change, will enable us to work more effectively with both commercial fishers and coastal land managers to target restoration and rehabilitation activities to maximise fishery benefits.

The Eastern King Prawn (Melicertus plebejus) is only found in the coastal regions of eastern Australia between central/northern Queensland and eastern Victoria. Its life cycle is relatively well-known - spawning predominantly occurs in deeper waters off northern NSW to Swains Reef in Queensland, and larvae develop as they drift south in the east Australian current. Post larval prawns recruit into the lower reaches of estuaries and leave the estuaries as late-juveniles. Prawns further develop in coastal habitats before reaching maturity and commencing a northward migration back to the northern spawning areas. The estuaries of northern NSW are considered to be some of the most important recruitment areas for EKP. Commercial fishers have provided many anecdotal reports of the extensive use of estuarine swamps by young EKP prior to the loss of wetland areas through urban and agricultural development. Also, anecdotal information suggests the inundation of freshwater and subsequent lowering of salinities in estuarine nurseries has had an adverse effect on growth and abundance of prawns.

This research aims to help understand the linkages between EKP and coastal habitats, described by fishers, and guide our efforts to rehabilitate habitat in order to naturally increase the productivity of the EKP fishery. 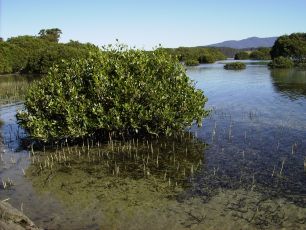 Food + not too much freshwater + warm water is ideal.

Rapid declines in temperature and salinity are not good for EKP productivity.

An estuary is not one big habitat: prawns live in the patches where conditions are favourable.

What the Project Involved

The project had the following objectives:

EKP fishers provided valuable information about EKP habitat and how habitats have changed. In the first part of the project historical references were examined and discussions held with current and former commercial fishers in this fishery to build a picture of just how productive the fishery once was. In addition, EKP fishers responded to a short survey to inform future effective communication with them on the findings.

The project was supported by funding from the Fisheries Research and Development Corporation on behalf of the Australian Government, with significant in-kind support from NSW Department of Primary Industries. Additional funding was provided by the Hunter and the North Coast Local Land Services, as well as Hunter Water, the Newcastle Ports Corporation, and Origin Energy. The project was supported by the NSW Professional Fisherman's Association, the Newcastle Commercial Fishermen's Co-operative and Oceanwatch.

Project updates are available below.

Detailed research methodology and findings are available in the papers published in peer-reviewed journals. The following plain-English summaries include the publication details.