Impacts of urban and rural development

Rural, urban and industrial development in estuarine areas has impacted mangrove, seagrass, saltmarsh and coastal lagoon communities through land clearance, agriculture, dredging, reclamation and waterfront development. Some communities, such as the seagrass Posidonia australis (strapweed), are of particular concern because they don't readily recolonise an area.

In freshwater environments, development has caused fish populations to decline through the removal of vegetation from river banks, wetlands and floodplains, increased sediment, nutrients and pollutants into streams, and the removal of organic matter and snags from rivers.

There are things however that we can do to protect and rehabilitate fish habitat.

Water entering waterways overland or from drains can be a significant problem for the health of aquatic habitats.

Problems can arise from large inflows of water, such as occurs when it floods, or from substances in the water, or both. Run-off can carry substances with it that do not belong in watercourses. For example, topsoil, chemicals, rubbish, nutrients and oil and grease off roads. At times, this polluted water will cause an algal bloom or a fish kill.

The increased volume and velocity of water entering watercourses during a flood is also a problem. This increase has come about because of extensive land clearing throughout most catchments and, especially in more urbanised areas, the increase of the land surface under hard surfaces. More water runs off faster from a car park than a playing field and less still runs off from a forest.

Vegetation serves to slow the flow of water and increase its infiltration into soil and groundwater storages. This enables the water to flow more gradually into watercourses over a longer period of time.

Unsealed roads are significant sourse of run-off and sedimentation. Overland flow, where the compaction of the capacity of the road or other surface to absorb water is reduced, is another factor that contributes to increased sedimentation.1 Water forms channels and carries its load of sediment into the waterway.

Increased sediments in the waterway can lead to: 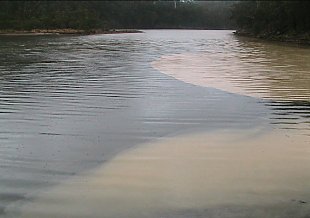 Pesticides are substances that are used to control organisms harmful to crops or animals. They can include chemicals that control plants, insects, fungi, bacteria and pest animals.

Impact on fish and other organisms

Pesticide usage presents a dilemma for land managers. Whilst providing significant increases in production and cost savings, the possible effects of pesticides on the environment may be significant.

Over the past 20 years artificial chemicals and substances such as pesticides are suspected of causing about 8% of fish kills in NSW.3 However, fish kills are not the only result of exposure to toxic substances. Fish populations can display the effects of exposure through reduced viability of sperm, eggs and larvae, increased incidence of abnormalities and reduced life expectancy. Pesticides can also cause skeletal defects and growth reduction of fish when eggs are exposed to certain levels.4,5

Certain pesticides can build up in the tissues of small animals and in plants. Larger animals, higher in the food chain, accumulate these chemicals by eating the animals containing pesticides. The impacts of bioaccumulation can be severe as history shows in the case of DDT.

Major water quality monitoring programs undertaken within NSW have detected a range of pesticides at levels which exceed current guidelines for protection of ecosystems (Table 1).6 The most frequently detected pesticides are endosulfan and atrazine.

Table 1: Pesticide levels in the central and northwest region of the Murray-Darling Basin (1998/99 data).

A herbicide is a chemical that kills plants. If herbicides are applied incorrectly, or enter waterbodies in high concentrations, they can affect aquatic ecosystems by killing plants which provide food and habitat for fish and other aquatic animals.

Some insecticides can have lethal and sublethal effects on non-target organisms. Studies show fish are affected by insecticides used in cotton production (eg endosulfan). More fish kills are reported in cotton growing areas during the growing season than other areas.6 High residue levels of endosulfan have also been found in fish at the peak of the spraying season.

Macroinvertebrates, such as mayfly nymphs and caddis fly larvae, are sensitive to high concentrations of endosulfan which can cause a decline in their populations. Changes in these food sources can also impact on fish populations.

There is strict legislation in NSW, including the Pesticides Act 1999, governing the use of pesticides. The NSW Environment Protection Authority (EPA) enforces the proper use of pesticides. Before they can be used, pesticides in Australia must also be rigorously assessed and registered by the National Registration Authority for Agricultural and Veterinary Chemicals. The Australian and New Zealand Environment and Conservation Council has developed guidelines that specify acceptable levels for pesticides in fresh and marine waters.

At low levels, nutrients entering waterways can lead to increased productivity by promoting the growth of algae and plants. Such a flush of nutrients can occur naturally with a flood. Nutrient pollution occurs when the levels or types of nutrients are different from what the aquatic ecosystem would naturally be exposed to.

Urban, industrial and agricultural areas can be important sources of nutrient pollution, especially where riparian vegetation is degraded, water infiltration reduced, and run-off channelled directly into waterways without being treated.

Case Study - The impact of floodgates on water quality

Research into the impact of floodgates in the Clarence River floodplain (northern rivers, NSW) found that floodgates reduced the numbers of juvenile fish and changed the species that were present behind the floodgate. Importantly, fish that are targeted by commercial and recreational fishing were worst affected.

The use of floodgates concentrated the nutrients in the water and changed the species of fish and of aquatic plants present.

The nutrients were higher because this catchment is used intensively, the vegetation along waterways had been cleared, and therefore was not trapping sediment and nutrients, and the floodgates were preventing the nutrients from being flushed out.

The changes to water quality behind the floodgates resulted in fewer fish species. The species present, such as native gudgeons and the exotic eastern gambusia, could tolerate disturbances, were short-lived and able to take advantage of favourable conditions as they arose.

Seagrasses and mangroves had disappeared behind floodgates and were not re-establishing. Instead, these areas had increased cover of aquatic weeds, including grasses, rushes and other submerged vegetation.

By reducing the water quality, mainly by changing the nutrient concentration, the operation of floodgates in this floodplain changed the total numbers of fish and the types of fish and other aquatic species that could live there.