Note: tractor access is the space between trees along the row that enables machinery to pass through. 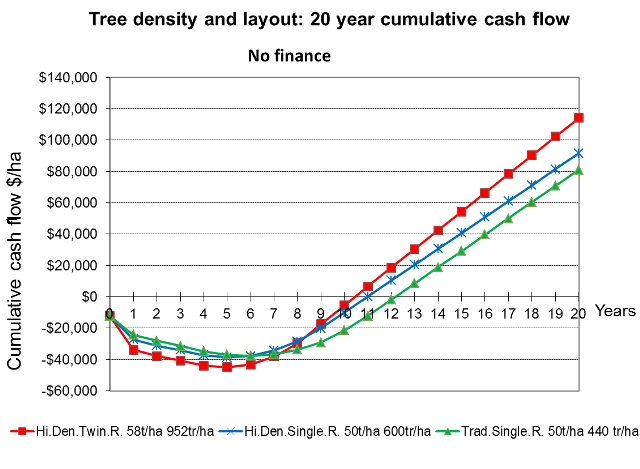 Figure 1 presents the results as a graph outlining the cumulative cash flow for each scenario over 20 years. During the first 11–13 years the enterprise was in debit since substantial cash was spent in buying trees and preparing the land for planting. Although yield might commence in year three, it takes many years of income to repay the land development and planting debit. The high-density plantings had the higher debit due to more trees planted per hectare, but they produce higher yields than traditional density planting in the early years and thus pay off the debt quicker. This results in the cash flow breakeven point being reached 1–2 years earlier for the high-density plantings (years 10–11) compared to the traditional density planting (year 12).

The NPV over the 20-year period in all scenarios provides a positive result and the differences between each scenario are about $10,000 to $20,000 per hectare.

It is a personal choice whether the differences in cash flow and NPV over 20 years are sufficient to justify the extra effort of planting and managing a high-density block. Budgets are very dependent upon the assumptions used and some can significantly change results. For example, growing your own nursery trees can reduce the initial debt and favour high-density planting. Management and cultural practices are also very important considerations. The higher density trees require the extra effort of annual pruning, however, the trees will be smaller than the traditional density trees and be easier to harvest and spray. Picking labour favour smaller trees because they require less or no ladder work, which makes them faster to harvest and results in fewer ladder-related injuries.

To help growers better assess their situation, the Excel spreadsheets used to develop the high-density scenarios are available on the NSW DPI citrus website for growers to customise pricing and management assumptions to their needs. For further information, please contact Steven Falivene at steven.falivene@nsw.dpi.gov.au.