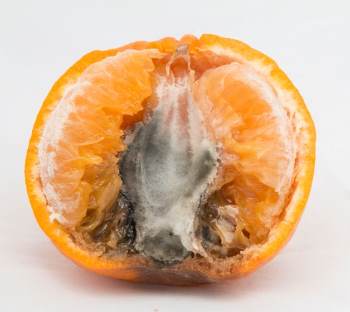 Black core rot is a fungal disease of citrus that is caused by Alternaria. Spores of the fungus enter citrus fruit through wounds during early fruit development after petal fall. Figures 1 and 2 show disease symptoms in infected fruit.

Delaying harvest until most of the infected fruit have dropped is standard management practice for black core rot. In 2017, NSW DPI tested the efficacy of six treatments to reduce the impact of black core rot in Imperial mandarins. Over 5,000 fruit were inspected during the trial but unfortunately none of the treatments significantly reduced disease incidence. Either disease pressure was too high at the site or infection had already taken place prior to spray application at 85% petal fall.
NSW DPI repeated the trial this season. The number of treatments was reduced and the size of plots and buffer rows increased to accommodate spray application with an oscillating boom sprayer. Fungicide treatments of Azoxystrobin (Amistar®) and Silica (monosilicic acid), applied at 60 and 100% petal fall, were compared to an autumn applied copper spray.
Disease pressure was lower during the 2018 season, with approximately 15% of mandarins infected with black core rot in the control plot compared to more than 20% in 2017. Figure 3 shows that Amistar® treated plots had significantly less black core rot compared with the copper fungicide and monosilicic acid treated plots. Most infected fruit dropped prior to harvest during June and July. Fallen fruit were collected from under the trees, cut laterally and visually assessed for black core rot. 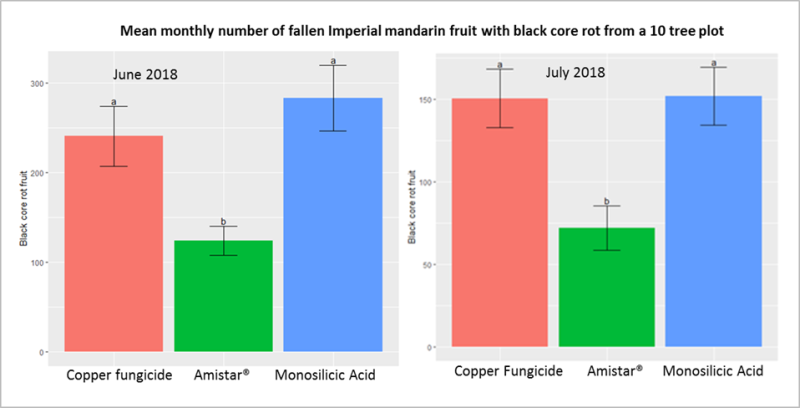 At the end of July, 160 fruit were harvested from each plot. To mimic the process from harvest to the kitchen bench, fruit were washed and treated with a Thiabendazole fungicide prior to storage for 4 weeks at 4 °C. After cold storage, fruit were held at ambient temperature for 1 week then cut and visually assessed for disease. Similar to the fallen fruit, the Amistar® treated plots had significantly less black core rot compared with the stored mandarins (Figure 4). A 4% infection level at harvest is disappointing however, Amistar® has significantly reduced disease incidence. Delaying harvest for another 14 days may allow further infected fruit to drop, but acid levels had dropped and Imperial mandarins were nearing the end of their season. Further research comparing azoxyztrobin (Amistar®), difenoconazole and copper applied at 60% petal fall will help to improve our understanding of managing black core rot.

The authors thank Dr Jianhua Mo (NSW DPI) for data analysis and Marcello Mallamace for collaboration on the research site.