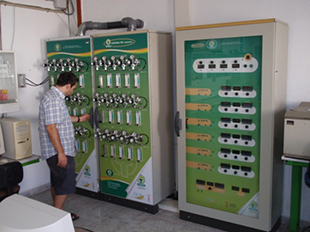 The Australian citrus industry mainly relies on  a few groups of postharvest chemicals. This poses numerous challenges. A range of different university and commercial laboratories in Spain are working on controlling postharvest decay in citrus.

Researchers in Valencia reported on the efficacy of a tebuconazole fungicide formulation, which was mixed with wax and applied to four different citrus varieties. They showed that the fungicidal effect of tebuconazole was similar to that of other authorised fungicides and is therefore a potential fungicide alternative.

Tebuconazole is currently not registered for citrus, but is used in a number of other horticultural and broadacre crops. It is important to increase our treatment options to control postharvest decay, as different export markets have different residue and treatment requirements.

Pictured is a visit to a postharvest research laboratory at the Valencian Institute for Agricultural Research (IVIA) in Spain.

Zero tolerance to fungicide residues drives much of the citrus postharvest research and development. Spanish researchers from different laboratories reported on assessing new treatments such as ‘non-synthetic’ chemicals (such as sodium benzoate and Cirtrocide® PC etc.), in combination with physical treatments (such as heat and ultra-violet radiation (UV-C) etc.) to successfully control citrus decay and storage disorders such as peteca in lemons. These new treatments require more development before commercial application.

Researchers in Valencia are examining the role of LED blue light in reducing green mould Penicillium digitatum development. They demonstrated the potential involvement of ethylene and phenylpropanoids in the blue light-induced resistance against P. digitatum attack in citrus fruit. This exciting research could have positive practical outcomes for industry to manage decay without chemicals, but its application to industry is some time away. The symposium was the largest scientific meeting dedicated to the science and technology of fruit and vegetable storage for the past several years. Citrus was one of the key horticultural crops of interest at the symposium with significant academic and commercial research interest from Spain and around the world. Pictured is one of the many concurrent sessions at the conference.

The conference was well supported by local horticultural industries, which gained a lot of good information from the 325 presentations over the four days. John Golding was on the Scientific Committee for the Symposium and chaired the symposium’s first session Preharvest and harvesting advances.

The symposium was a unique forum to exchange ideas and hear what is happening in leading postharvest research laboratories around the world. The next ISHS Postharvest Symposium will be held in New Zealand in 2020.