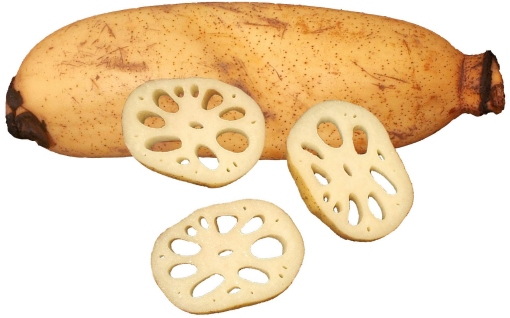 The lotus (Nelumbo nucifera) has been cultivated for at least 3,000 years. It has been revered in many parts of Asia since ancient times, where it can be a symbol of fertility, beauty, holiness or purity.  As lotus displays all of the different stages of growth simultaneously – bud, flower and seed pod – it can also be a symbol of the past, present and future. Lotus are cultivated in many parts of Asia, but also in Russia and parts of Africa. The lotus depicted in Egyptian art (Nymphaea sp.) is not the same species, although it is related.

The lotus grows in shallow water and mud in full sun in tropical and subtropical areas. It has large round leaves and tall flower stems with white to pink flowers followed by striking seed pods. Lotus flowers are unusual in that they are thermogenic. That is, they generate their own heat and can maintain a temperature of around 30°C even when the air temperature falls much lower. The seeds can stay viable for a very long time – there are reports of thousand year old lotus seeds being successfully germinated and grown!

Lotus roots form a series of long, smooth tubers in the mud, a bit like a large string of sausages. Tubers are usually 15-25 cm long, although they can grow much larger. Both the stems and the tubers have large, hollow air passages that run through them – this is how the roots can survive growing in still, muddy water. The tubers are usually harvested at the end of summer.

In Northern Queensland lotus is being used in conjunction with aquaculture – the lotus plants remove excess nutrients from water contaminated with fish waste. The water can then be recycled.

All parts of the lotus plant can be eaten.