This paper was presented by Dr Sophie Parks at the International Symposium on Mineral Nutrition of Fruit Crops in Tel Aviv, Israel in June 2021.

The production of blueberry as an evergreen crop, using southern highbush cultivars, is increasing in warm temperate climates. In Australia, cultivars are selected that flower and fruit through winter and spring but their nutritional requirements in this system are little understood.

In this study, we aimed to evaluate the suitability of summer as the annual sampling period for the monitoring of plant nitrogen (N) status, and to compare these values, and those for other nutrients, to the current standards based on North American data.

We selected an early fruiting cultivar (Vaccinium corymbosum ‘11-11’) and sampled leaves approximately monthly from autumn through to summer from an experimental crop grown in substrate, and from four commercial crops, three in soil and another in substrate.

A similar pattern of mature leaf N concentration occurred among the crops with a peak just prior to harvest and levels declining to a minimum towards early summer.

Leaf sampling during summer appears to be appropriate as leaf N is stable but responsive to applied fertiliser. Further work is required to determine the N requirement for this evergreen crop and to understand the allocation of nutrients and biomass to organs at different phenological stages. 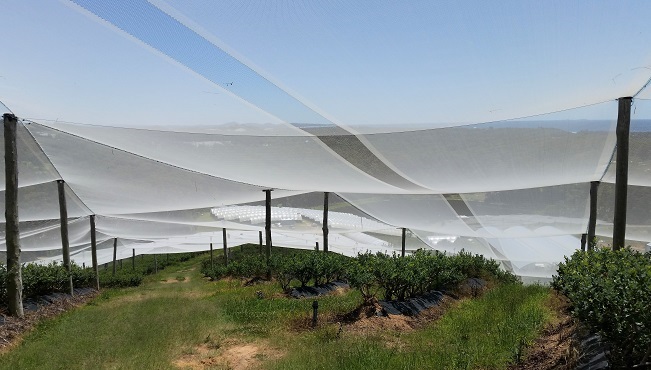 The southern highbush (Vaccinium corymbosum interspecific hybrids) and rabbiteye (Vaccinium virgatum Ait.) cultivars of blueberry are produced as evergreen crops and are typically grown in the coastal regions of New South Wales (NSW) and Queensland, Australia, which have a climate zone of warm humid summers and mild winters.

However, most information on the nutrient requirements of blueberry is limited to deciduous crops grown in cooler climates. To develop knowledge on fertiliser requirements, appropriate for evergreen blueberry cultivars grown in Australia, research is being conducted as part of the NSW Government's Clean Coastal Catchments project funded under the NSW Marine Estate Management Strategy 2018-2028.

The development and adoption of best management practices for fertiliser use in blueberry is one approach to minimising the amount of diffuse nutrient pollution from these farms flowing into coastal waterways. This approach forms part of an ecosystem-based strategy for protecting the biodiversity of the marine estate (Smith et al., 2017).

The analysis of nutrients in plant leaves provides an indication of nutrient status associated with plant health (Smith and Loneragan, 1997). Leaf tissue analysis is recommended annually, and sampling of blueberry leaves is timed for summer, following harvest (Bryson and Mills, 2014).

The sufficiency ranges of leaf nutrients for southern highbush cultivars are based on a survey of healthy commercial crops and those of rabbiteye have been verified through research trials (Bryson and Mills., 2014). However, little verification work for blueberry has been conducted in Australia (Robinson et al., 1997).

In this study, we aimed to evaluate the timing of summer as the appropriate annual sampling period for monitoring of plant nitrogen, and to compare these values, and those of other nutrients, to the current standards based on North American data.

We conducted a survey evaluating the nutrient concentrations of the youngest full-sized leaves from several commercial blueberry crops grown in the open field as evergreen systems. Five crops of southern highbush blueberry Vaccinium corymbosum ‘11-11’, which produces fruit in winter and spring, were included in the survey. Four of these were mature commercial crops, between three to six years old, and one was a research crop in its second year of growth. All crops had a climate zone classification of warm humid summer, with an average daily annual temperature of about 18-21 oC, average daily annual relative humidity of about 80-90 % and average annual rainfall of about 1500 mm (Australian Bureau of Meteorology, 2021). The 24 plants of the research crop were grown outdoors in 52L pots containing a commercial substrate mix for blueberry of coarse Irish peat, coir husk and perlite (Jiffy®). A complete nutrient solution, including nitrogen (N) supplied at 2.8 mM from ammonium and nitrate sources, was applied through drippers twice daily and volume modified according to weather conditions. The electrical conductivity (EC) of the nutrient solution was 0.88 dS/m and the pH 5.7. The potted substrate used for the Corindi crop was a proprietary mix, similar to that used for the research crop but information on fertigation practices were not available.

The soil characteristics of the commercial crops were:

Types were classed according to the Australian soil classification system. The pH (calcium chloride) and EC were analysed at WAI (Rayment and Higginson, 1992). Information on fertigation practices for the soil crops was not available.

Approximately 60-70 youngest full-sized leaves were sampled from each crop, approximately monthly, between (11/01/2020) and (27/04/2021) and placed in a paper bag and dried to constant dry weight at 60 oC. Leaves were ground and analysed for total nitrogen (N) by Dumas combustion (Rayment and Lyons, 2011), and for other elements (phosphorus, potassium, calcium, magnesium, sulfur, iron, manganese, boron, copper, zinc, molybdenum) by microwave digest and ICP-AES analysis at the Environmental Laboratory, WAI (Kalra, 2001).

Values of total leaf N were plotted over time (Figure 1). To compare the leaf nutrients of the survey crops against the sufficiency standards, the mean and range of concentrations obtained during summer are presented (Table 1).

The number of green fruit were counted every two weeks in the research crop and the period of peak count identified (21/07/20 – 11/09/20) and represented in Figure 1. Production data was not available for the Tuckombil crop. The peak period of fruit harvest in the locality where the crops at Bucca, Corindi and Woolgoolga were located, was supplied by the local grower cooperative as production data for the individual crops was not available. For this region, approximately 22.5% of total yield was produced each month between the four months from July-October, 2020 (Figure 1).

The survey showed a strong pattern of leaf N with concentrations increasing during winter (June, July, August), and declining sharply during spring, post fruit harvest (Figure 1). It is possible that the winter increase in leaf concentrations reflect accumulation of leaf N, related to the transfer of N from senescing leaves to the remaining leaves in the canopy, associated with a decline in growth and plant demand for N. Partial leaf senescence during winter has been described in another evergreen southern highbush cultivar, ‘OB1’, as a reduction in the leaf area index by about 36% (Simpson et al., in press). Further, the onset of dormancy is associated with low plant demand for N and low N uptake in the deciduous southern highbush cultivar ‘Bluecrop’ (Throop and Hanson, 1997). The subsequent decline in leaf N concentration, postharvest, may relate to an increasing demand for plant N in spring associated with new growth, observed as an increase in the rate of stem width in the research crop (data not shown). Previously, it has been demonstrated that the evergreen Vaccinium vitis-idaea uses N from leaves grown in the previous year to support new shoot growth (Grelet et al., 2001). Nonetheless, southern highbush cultivars can differ significantly in their patterns of dry mass and N allocation during vegetative and reproductive stages (Pescie et al., 2018). Therefore, further research on the biomass and N allocation at different phenological stages for the ’11-11’ cultivar would permit a better understanding of N demand on a seasonal basis for this crop. 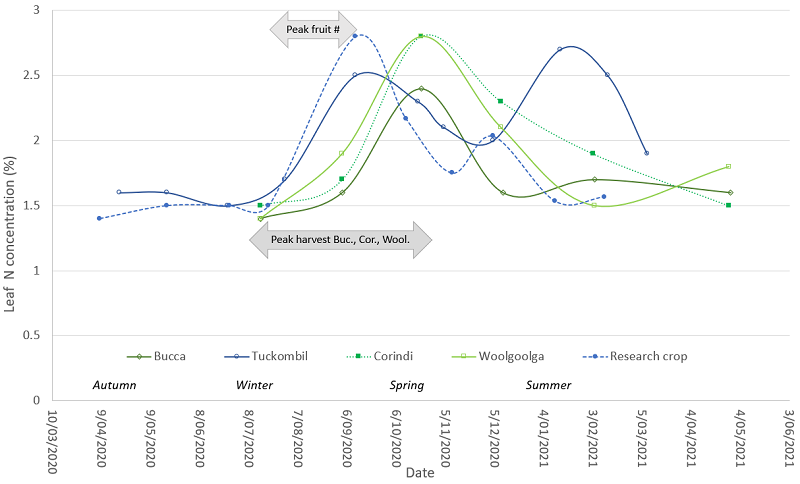 The timing of the peak in leaf N appears to differ slightly among the crops and may relate to factors influencing plant phenology, including some production practices. For example, in one study, flower bloom and fruit harvest were earlier for plants grown at a higher rate of N (Fang et al. 2020).  Local climatic conditions may also have played a role since blueberry cultivars with the same genetics can show differences in phenological traits such as bloom and ripening dates when grown in locations with contrasting temperatures in late winter and early spring (Finn et al., 2003). Detailed information on site-specific production practices, timing of phenological stages and climatic conditions were available only for the research crop, and conducting the survey over several seasons is needed to identify valid differences in leaf N and other nutrients among the crops.

The mean concentration of leaf N in the survey during summer (December, January, February) was high relative to the standard sufficiency range (Table 1), although two crops were within the sufficiency range (Figure 1). A very high leaf N concentration was observed for the commercial crop at Tuckombil, relative to the other crops surveyed. We presume that this is a response of the crop to receiving excessive amounts of N fertiliser, since the grower regularly applied N to the crop via fertigation. Nonetheless, a higher requirement than the sufficiency range for this cultivar cannot be ruled out since we observed that the plants in the research crop with the highest values of leaf N tended to show the greatest gains in stem growth (data not shown), but this needs to be further evaluated under replicated treatments of contrasting N supplies.

The concentration range of leaf P in the survey during summer was above that of the standard sufficiency range (Table 1) and aligned with leaf N in its pattern of concentrations, increasing during winter and declining sharply from late spring. The high summer values may, like N, reflect a high P supply, a high P sufficiency range, or perhaps is residual and reflects an absence of nutrient allocation to the crown and roots which would otherwise occur prior to winter for a dormant crop of blueberry (Banados et al., 2012; Birkhold et al., 1993; Bryla et al., 2012). Although the factors that influence leaf nutrient concentrations need to be clarified, it does appear that summer is an appropriate period for annual sampling to evaluate plant nutrient status of this evergreen cultivar. This period occurs during a steady stage of vegetative growth but appears to be responsive to N fertiliser supply as suggested by the Tuckombil crop with high leaf N. This is an essential trait for an index tissue being used to assess plant nutrient status.

Most elemental concentrations were generally consistent with the sufficiency standards, except that the survey highlighted that leaf Ca was well below that of the sufficiency standard, and leaf Mg, and leaf manganese in one crop, was somewhat low (Table 1). Acid soils can be a problem for this industry, which can limit the uptake of cations including Ca and Mg but root zone pH (4.3-5.4) for these crops was not likely to be limiting.

In further considering the concentrations of Ca in leaves, a pattern occurred with all crops at their lowest levels within a narrow range in mid spring and into summer, before increasing in mid-summer. There appears to be little effect of crop location on leaf Ca during this period. A previous survey during summer, of three blueberry cultivars, on the Central Coast of NSW, suggests that potentially, some southern highbush cultivars may have a low Ca requirement. Whilst the rabbiteye cultivars (‘Tiffblue’ and ‘Southland’) were above the sufficiency range, the southern highbush cultivar, ‘Sharpeblue’, growing in the same location, had Ca levels below the sufficiency range, with values similar to the current study (Sarooshi and Cresswell, 1986).

This study has shown that plant phenology appears to have a strong influence on the cycle of leaf N concentration and the concentration of some other leaf nutrients. Comparison of leaf nutrient concentrations with the sufficiency standards for southern highbush has revealed generally high levels of N and P and low levels of Ca and perhaps Mg and Mn. Further research on the response of this cultivar to a range of nitrogen supply rates will clarify the allocation of N and other nutrients and biomass to organs during the vegetative and reproductive periods. This information will lead to better guidelines for the rate and timing of fertiliser applications for this cultivar and for other evergreen southern highbush cultivars grown in Australia.

Birkhold, K. T. and Darnell, R. L. (1993) Contribution of storage and currently assimilated nitrogen to vegetative and reproductive growth of rabbiteye blueberry. Journal of the American Society for Horticultural Science, 118, 101–108.

Throop PA and Hanson EJ. (1997). Effect of application date on absorption of 15Nitrogen by highbush blueberry. Journal of the American Society for Horticultural Science, 122(3),422-426.