Soil erosion in macadamia orchards has been identified as an environmental and production issue in the Northern Rivers region of NSW for several decades (Firth 2003). The erodible red Ferrosol soil in this region is vulnerable to movement in a sub-tropical climate where intense rainfall and storms are routine events.

Ground cover plants have been shown to be the most effective way to reduce soil loss, with research demonstrating that Smothergrass (Dactyloctenium australe) reduced soil loss by 99% (Reid 2002). Trials showed that the grass slowed the amount of water and soil moving down slope (Quinlan et al. 2008), trapping soil and bound phosphorus, while reducing the volume of water runoff and accompanying dissolved nitrate. 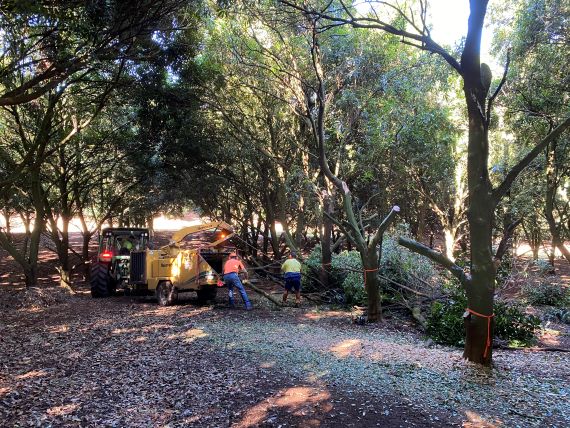 In older orchards with large trees and close spacings there is often insufficient light to support ground cover plant species, making alternative erosion management strategies necessary. Ideally the trees in these orchards should be pruned back to a manageable height that will allow light on to the orchard floor with minimal impact on yields. Pruning should be coupled with a drainage management plan that ensures water is diverted away from the tree rows and instead flows through the orchard along designated grassed watercourses.

Our research into the sources of soil erosion in macadamia orchards has found that stemflow, the water funnelling down the trunk during rainfall, concentrates high velocity water at the base of the stem. This intense water flow moved 3.8 tonne of soil per hectare per year in an orchard with 8 x 4 metre spacing, detaching and displacing soil particles more than two metres from the base of the trunk (Cox et al. 2010).

To counter the soil movement, our recommendations prioritise protecting the soil surface, ideally with ground cover, as well as implementing a well-designed drainage management plan. In orchards where ground cover is not possible, adding mulch is a useful alternative. Adding an organic mulch that covers the soil surface under the trees will improve soil health in the long term. As the mulch breaks down, it will add organic matter to the soil, assisting with nutrient and soil moisture retention. The longevity of mulches varies considerably depending on their properties. Compost will break down quickly due to its usually fine particle size, but woodchip containing large particles that have not undergone any decomposition process will break down more slowly, protecting the soil for longer. An ideal mulch for macadamias in the Northern Rivers region will allow upslope surface water to move through the mulch material without causing significant disturbance.

The Clean Coastal Catchment (CCC) project, funded by the NSW Government’s Marine Estate Management Strategy, is conducting further research to evaluate soil erosion control in macadamias. The aim is to reduce the risk of sediment and nutrients moving off farm into water ways in the lower catchment.

We are currently examining the erosion control efficacy of a range of treatments including erosion sox and several different mulch options.

The trial treatments include: The mulch treatments in the trial have been applied in strips either side of the tree row, spread from the tree trunk out to two metres either side, for a total width of four metres to protect to the drip line and harvest area.

Mulch height over time is monitored to capture losses due to settling, decomposition and harvest effects, assessing how long each mulch lasts and the extent of erosion due to upslope surface water flowing into the mulches.

Soil and mulch height is monitored with a laser meter from a fixed point, measuring soil losses (and gains) in the radial area around the tree. Measurements are taken from points at 30cm and 1m distances from the trunk. The impact of the different mulches and compost on soil fertility, soil health and root density will also be assessed.

The Clean Coastal Catchment project is also monitoring on-farm soil and water quality on two commercial macadamia farms, one on the Alstonville plateau (Ferrosol), and the other on the coastal flood plain (Vertosol).