All Japanese encephalitis (JE) regulatory controls that were in place in New South Wales for the 2021-22 season have now been lifted.

In the 2022-23 season, there will be no quarantine controls on premises where JE is detected, and no related movement restrictions on pigs, horses or other animals. Some high-risk movements of pigs to premises other than processing facilities or other piggeries will be monitored to assist in managing the risk of JE infection in humans.

JE is a notifiable disease in New South Wales, meaning any suspicion of JE cases must be reported to authorities immediately.

As mosquito numbers start to increase with the warmer weather and flood conditions impact much of NSW, the risk of mosquito-borne diseases including JE over the spring and summer months is increased.

Disease cases and surveillance activities in animals and humans during the 2021-2022 season have indicated the JE virus is circulating more widely than previously known.

NSW Department of Primary Industries is continuing to work with NSW Health and other experts on surveillance and disease modelling to improve our understanding of JE as an emerging disease in NSW.

On 18 November, NSW Department of Primary Industries has confirmed the first case of Japanese encephalitis (JE) in pigs for the 2022-2023 season. Affected piglets were from a property in the Murray Local Land Services region, a region that has been heavily flood impacted during winter and a part of the outbreak earlier this year.

If you observe unusual signs of disease, behaviour or death consistent with JE, contact your Local Land Services District Veterinarian (DV) on 1300 795 299 or the all-hours Emergency Animal Disease Watch Hotline on 1800 675 888 for assistance or advice

What is Japanese encephalitis (JE)

Other animals can be infected with the virus but typically do not show signs of illness, such as cattle, sheep, goats, dogs, cats, bats, rodents, reptiles, amphibians and birds. Cattle, dogs, sheep, alpacas, and goats are dead end hosts that do not infect mosquitoes or other animals. Animals act as sentinels (or indicators), highlighting the presence of the virus in the environment.

People can also become infected with the virus from the bite of an infected mosquito. Most human cases of Japanese encephalitis will have no symptoms or very mild symptoms, however some people develop severe, life-threatening illness.

Infection with Japanese encephalitis virus (JEV) is a serious, emergency animal (exotic) disease of animals. It is notifiable in Australia, meaning any suspected cases need to be reported immediately.

What are my responsibilities in reporting signs of possible JE

Japanese encephalitis is a notifiable disease in NSW.

This means that owners, managers or people working with animals, particularly pigs and horses, must immediately report all suspicion of disease to authorities.

Pigs: If you see any unusual signs of disease or death in your pigs or suspect JE in pigs, you must report it to your Local Land Services District Veterinarian immediately on 1300 795 299 or call the all-hours Emergency Animal Disease Hotline on 1800 675 888 for assistance or advice.

Horses: If you see any unusual signs of disease or death in your horse(s) or you suspect JE in horses, you must report it to your veterinarian or call the all-hours Emergency Animal Disease Hotline on 1800 675 888 for assistance or advice.

What other responsibilities do I have

All owners or managers of susceptible animals, whether for production or companionship, have a responsibility, a biosecurity duty, to manage the risk of Japanese encephalitis introduction and spread on their property. This can be done by developing and actioning a mosquito management plan, based on environmental and operational factors, to control mosquitoes and manage the risk of JE for pig, horse and public health management. For further advice, plans and templates, visit Farm Biosecurity.

How is JE spread

The Japanese encephalitis virus is a member of the Flavivirus genus. The virus is primarily spread when mosquitoes feed on infected animals, and then transmit the virus to other animals. The virus does not usually spread directly from animal to animal (i.e. it is not considered contagious). Australia has a number of mosquito species that are capable of transmitting the virus to animals and humans, however Culex spp are believed to be the most common vector for the virus. These mosquitoes tend to be most active at dawn and dusk.

It is not known how the virus came onto mainland Australia, and the 2021 - 2022 season was the first  time the virus has been detected in southern Australia. It is likely that the movement of infected mosquitoes or migratory waterbirds may have played a part in the virus’ spread.

Waterbirds, particularly wading birds, such as herons and egrets, are the main natural reservoirs of Japanese encephalitis virus. Pigs and waterbirds are an important part of the transmission cycle as they can amplify the virus and provide an ongoing source of virus to infect local mosquito populations. Detections of JE in Australia in 2022

In 2022, outbreaks of Japanese encephalitis were reported in domestic pigs and people in Queensland, New South Wales, Victoria and South Australia. In addition, cases of JE were reported in the Northern Territory in a number of feral pigs as part of their northern Australia surveillance strategy (NAQS).

In NSW, all confirmed cases of Japanese encephalitis in pigs were detected in inland regional areas that were predominantly concentrated along water courses and west of the Great Dividing Range.

In addition, evidence of JE virus infection was detected in horses from the North Coast, Hunter, Greater Sydney, Central West and Riverina Local Land Services regions of NSW. These horses were probably  exposed to the virus during summer to mid-autumn 2022. No cases have been definitively confirmed. However, the combination of clinical signs and test results suggests that JE infection is a probable or possible cause for the disease.

In 2022, South Australia had a confirmed case of Japanese encephalitis in an alpaca in the Adelaide Plains Local Government Area.

Results from surveillance projects undertaken in humans and animals late in the season indicate the JE virus is likely to be circulating more widely in NSW and other states than was previously suspected.

The national policy is to closely monitor Japanese encephalitis  in domestic animal populations to support public health agencies and the affected industries. More information about national disease response activities is available at outbreak.gov.au

Currently, there is no effective treatment for Japanese encephalitis in animals in Australia.

The best way to protect your pigs, horses and your local community is by developing and implementing an integrated mosquito management plan. This involves targeting all stages of the mosquito life cycle to break the breeding cycle (see Figure 2). 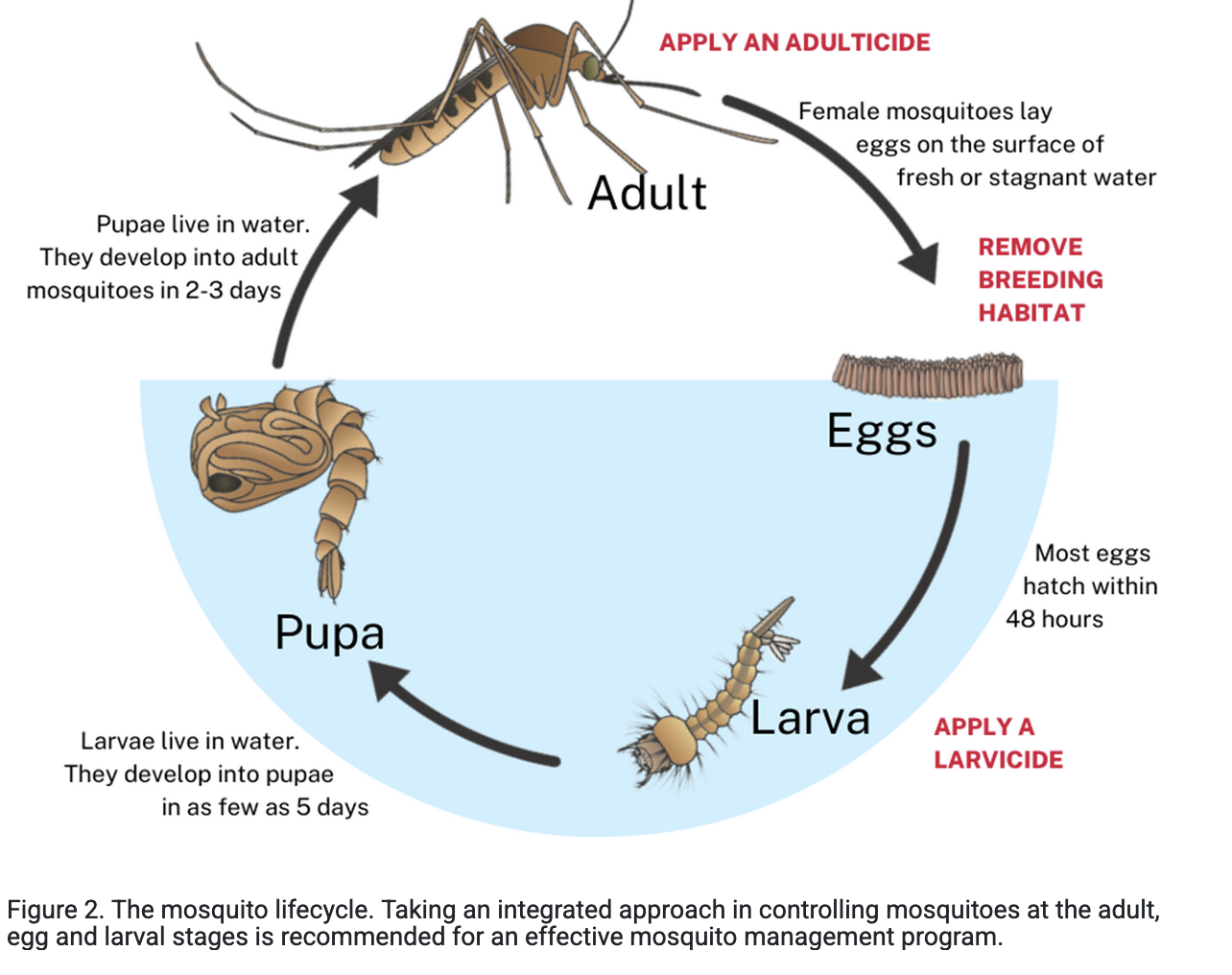 Further information on controlling mosquitos around piggeries can be found at Farm Biosecurity.

Protecting you and your people

Veterinary management of Japanese encephalitis: What to do if a producer calls with suspect JE

JE is associated with reproductive failure in pigs, with 50–70% losses reported in affected populations:

Infertility in boars - this is most commonly temporary but may be permanent if the boar is severely affected.

More information on clinical presentation and investigation can be found at:

Pigs (feral and domestic) develop high levels of infection and are also major amplifiers of the virus.

The best way to protect your pigs is by developing and implementing an integrated mosquito management plan. This involves a targeting all stages of the mosquito life cycle to break the breeding cycle.

If you observe signs of disease or death consistent with JE virus, contact the Emergency Animal Disease (EAD) Hotline on 1800 675 888 for advice.

Either your private veterinarian or a Local Land Services District Veterinarian will coordinate collecting samples for testing. Samples required for testing include:

If breeder pigs are suspected of having JE, the vet may require blood samples for testing

Japanese encephalitis is a notifiable livestock disease. Therefore, all laboratory testing for JE is covered by the NSW Government.

What to do while you're waiting for lab results

Due to the clinical similarity to Hendra virus infection, a sporadic but serious zoonotic disease, it is important to take appropriate precautions when assessing, sampling, and treating affected horses until the veterinarian has sampled the horse for Hendra virus and the results have been reported as  negative for Hendra virus.

Horse owners are encouraged be aware of the clinical signs of JE. The disease may be subclinical, meaning that they can be infected but show no signs of the disease

Most clinical disease is mild, however more severe encephalitis can occur which may be fatal

Clinical signs may include:

Japanese encephalitis has an incubation period of 4-14 days in horses. Horses do not develop a detectable viraemia and are a dead-end host i.e. a JEV infected horse is not able to infect mosquitoes at any stage.People do not get infected from horses.

While reports of the disease in other species are rare, overseas, the disease has been reported in donkeys.

If you observe unusual signs of disease, behaviour, or death in your horse(s), contact your veterinarian or the Emergency Animal Disease Watch Hotline on 1800 675 888 for assistance or advice.

Horse owners are encouraged to reduce the risk of horses being exposed to mosquitoes, after the confirmation of Japanese encephalitis in pigs New South Wales in 2022.

Stabling horses between dusk and dawn could help, as the mosquito most likely to carry diseases of concern is a night-time feeder that stays outdoors.

If you observe signs of disease or death consistent with JEV, contact the Emergency Animal Disease (EAD) Hotline on 1800 675 888 for advice.

Paired blood samples two to four weeks apart (acute and convalescent). A single sample will only alert to previous exposure at some time while paired sampling will provide a clearer indication of recent infection.

Japanese encephalitis is a notifiable livestock disease. Therefore, all laboratory testing for JE is covered by the NSW Government.

What to do while waiting for lab results

There has been considerable impact on both human health, animal industries as well as socio-economic impacts.

For those livestock owners who have had stock affected by JE, the impacts may be far reaching and beyond production losses alone. There are a number of Farm Business and Wellbeing resources that are available to support pig owners and producers affected by JE.

The Rural Financial Counselling Service (RFCS) NSW are available to help affected producers manage the financials at play and lessen the stress. RFCS NSWs completely free services specialise in helping primary producers with the risk management and regulatory requirements that are in place to manage JE.

RFCS NSW has local counsellors who are experienced in guiding farmers though the toughest of conditions, come flood, drought, mouse plagues or emergency disease events.

RAMHP can help link people to local mental health support, as well as offer training to workplaces and community groups about mental health and wellbeing in times of adversity.

For more details, or to find a RAMHP coordinator near you, visit www.ramhp.com.au

The Farm Business Assistance directory brings together assistance and support options for you and your farm business from a wide range of Government and private sources.

During an emergency animal disease event, like Japanese encephalitis, and other challenges, it is more common for people to experience distress, including anxiety and depression.

With a little help, you can employ tools and strategies that support stronger mental health and wellbeing – making you, your family and your business more resilient.

The Farm Hub provides a Mental Health Resource hub, summarising a range of services that are available to help strengthen mental wellbeing for the farming community.