African swine fever (ASF), is a serious, highly contagious disease of pigs. It is notifiable in Australia, meaning any suspected cases need to be reported immediately.

How is it characterised?

ASF virus can affect domestic and feral pigs of all ages. Clinical manifestations include fever, ‘blotching’ of the skin, incoordination, diarrhoea, vomiting and pneumonia. It has an incubation period of up to 15 days and most infected animals die within 10 days.

ASF virus does not spread from pigs to humans and does not make humans sick.

ASF is highly contagious and resistant and can stay in the environment for months.  ASF can be spread by:

Feeding meat derived from a mammal or any food or food scraps, bakery waste, restaurant waste and untreated used cooking oils to pigs that contain or have been in contact with meat derived from a mammal is illegal in all states and territories of Australia. These restrictions apply to all pigs including pet pigs.This is because swill can carry exotic diseases, including ASF, that could devastate our livestock industries.

Look for quality assured feed and ask your feed supplier for a vendor declaration. For more information on what you can and can’t feed your pigs, view Primefact 637 - Swill feeding.

How are suspect ASF cases investigated??

If pig illness or deaths are consistent with disease due to ASF, contact the Emergency Animal Disease Watch Hotline on 1800 675 888 for advice. Please see Recognising exotic diseases of pigs Primefact 955 for guidance on ASF clinical presentation. For further information refer to Emergency animal diseases field guide for Australian veterinarians and the Animal Health Australia – Current situation with African swine fever.

More information on clinical presentation and investigation can be found at:

Although there have been no reported cases of ASF in Australia, an outbreak of this deadly disease was reported in China in 2018, where authorities ordered culls across the country and a ban on the movement of live pigs in reaction to outbreaks of ASF in 10 of its provinces.

An outbreak of ASF was also confirmed in 2019 in Belgium, marking the arrival of the disease in western Europe.

The occurrence and spread of ASF would cause serious production losses to the $1.277 billion Australian pork industry.

Forms of the disease range from severe to very mild. In its most severe form, up to 100% of pigs may be affected and die. There are no known cures or vaccines against ASF.

If a case of ASF in the domestic and commercial pig population in Australia was confirmed, the default strategy would be to eradicate the disease in the shortest possible time by implementing strict quarantine and movement controls to prevent the spread of the virus by animals, people, products and equipment.However, in the event that ASF was confirmed in the feral pig population in Australia, the strategy implemented would be in accordance with the AUSVETPLAN ASF Response Strategy.

Should there be an Emergency Animal Disease (EAD) situation such as a confirmed case of ASF, all pigs (pets and commercial) will be treated equally. Disease does not discriminate between pet or commercial pigs - all pigs can suffer all pig diseases. This means measures such as movement controls, or euthanasia requirements apply to all pigs - pets and commercial.

In NSW, all pigs (pets and commercial) need to be tagged or branded to assist with identification as part of the National Livestock Identification System (NLIS). The NLIS enhances Australia's ability to quickly contain a major food safety or disease incident.

If you suspect ASF in pigs, you must report it to your Local Land Services District Veterinarian immediately on 1300 795 299 or call the 24 hour Emergency Animal Disease Hotline on 1800 675 888.

Printable versions of our resources 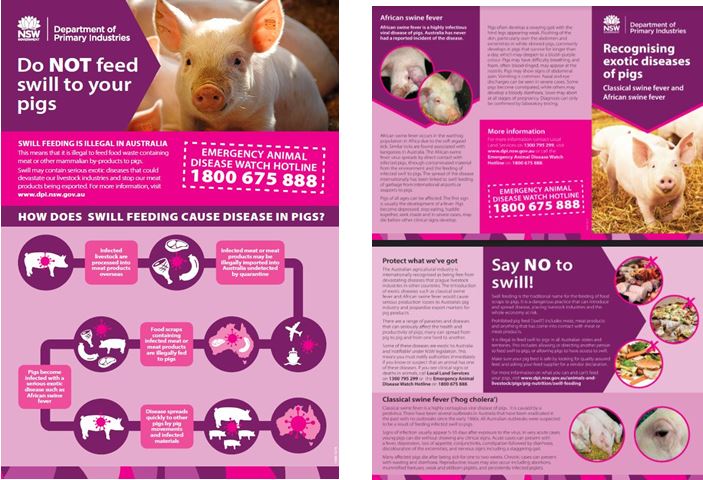