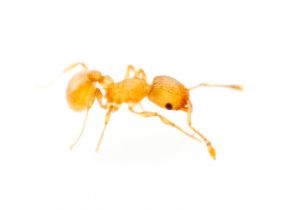 Electric ants (Wasmannia auropunctata) are native to Central and South America and are regarded as one of the world’s worst invasive species. They compete with, prey on and displace native animals, ants and insects. They can also inflict painful stings on humans and animals.

Electric ants are tiny and measure approximately 1.5 mm long. They have a ginger body and are usually slow moving. They form distinct foraging lines.

How are they spread?

Electric ants are usually spread by human activity. This includes the movement of host materials like timber, pots, soil, rocks and tree limbs. Electric ant could arrive in Australia by hitching a ride on ships, planes, containers or machinery.

The electric ant was detected near Cairns in 2006 and Biosecurity Queensland are engaged in in an effort to minimise the risk of spread and eradicate the pest. They are not present elsewhere in Australia.The electric ant is native to Central and South America however populations have established in the West Indies, Mexico, West Africa, Galapagos Islands, New Caledonia and the Solomon Islands.

Their environmental impacts include displacing other ant species, causing a decline in the population in invertebrates, small vertebrates and reptiles. They damage primary industries by increasing numbers of sap-sucking insects.

If you suspect electric ant, you should immediately call the Exotic Plant Pest Hotline on 1800 084 881 or email biosecurity@dpi.nsw.gov.au with a clear photo and your contact details.