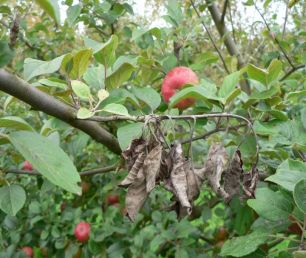 Fire blight is a disease caused by the bacterium Erwinia amylovora that affects fruit production and is considered one of the world’s worst plant diseases. It is a serious threat to the Australian apple and pear industries.

In the early stages of infection blossoms appear water-soaked and grey-green but quickly turn brown or black. Generally the entire flower cluster becomes blighted and killed.

Shoot blight is the most obvious symptom and can appear one to several weeks after petal fall.

The leaves and the stem on young shoot tips turn brown or black and bend over into a characteristic shape similar to the top of a shepherd’s crook or candy cane.

Insects and rain move the bacteria to flowers and shoots. Infection occurs through wounds caused by insects feeding, wind-whipping and hail. Bacterial ooze is often produced from new infection sites during the growing season. Further spread occurs as long as shoots keep growing and wounding of the tree occurs.

Fire blight was first recorded in the USA in 1794 on apples in New York State. The bacterium is native to North America and is present throughout the continent as well as through Europe.

Fire blight is not present in Australia.

Fire blight has the potential to devastate the apple and pear growing industries. The Australian apple and pear industry is valued at approximately $681 million per year.

If you suspect fire blight call the Exotic Plant Pest Hotline 1800 084 881 or email biosecurity@dpi.nsw.gov.au with a clear photo and your contact details.