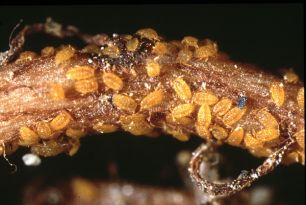 Phylloxera (Daktulsphaira vitifoliae) are very small aphid like insects that are regarded as the world’s worst grapevine pest. They  feed on the roots of grapevines and are found in most of the world’s grape growing regions.

Phylloxera is a small yellow insect and is only just visible to the naked eye. The first signs of a phylloxera infestation are yellowing and stunted growth of individual grapevines. Phylloxera feeds on grapevine roots by puncturing the root surface. The grapevine responds by forming galls on the root hairs and swellings on older roots.

Galls on the root hairs have a characteristic hook shaped form and hinder the growth of feeder roots. On larger roots there can be swelling of the root tissue and subsequent decay through secondary fungal or bacterial infection.

The insect spread around the world as the result of the movement of infected grapevines, particularly in the late 1800s.

Movement of phylloxera within Australia is most often attributed to crawlers. These are easily picked up by clothing, footwear, wind, equipment and vehicles, or in soil and vine material.

Phylloxera is found in most of the world’s grape growing regions. In New South Wales, phylloxera is found in the counties of Camden and Cumberland near Sydney and in the Albury/Corowa area. Several viticultural regions in Victoria including Rutherglen, Nagambie and King Valley are affected by the pest.

Phylloxera has not been detected in South Australia, Western Australia or Tasmania.

Commercial vine plantings in Australia are predominantly own rooted Vitis vinifera which means they are highly susceptible to phylloxera. Phylloxera causes considerable losses in both quality and yield. The severity of the damage is related to vine variety, phylloxera strain, soil moisture and seasonal temperatures.

There are few chemical or biological controls for phylloxera. This means removing infested vines and replanting with resistant varieties is the only viable control option. Currently, most of Australia's main vineyard regions are free of phylloxera. In order to protect these areas phylloxera zones have been declared in New South Wales and Victoria.

if you suspect phylloxera in a phylloxera exclusion zone please contact the Exotic Plant Pest Hotline on 1800 084 881.