What is cold water pollution?

Cold water pollution refers to an artificial lowering of the temperature in a water body.

How does cold water pollution occur?

Cold-water pollution is caused by cold water being released into rivers from large dams during warmer months. Between spring and autumn, the water stored in large dams can form two layers: a warm surface layer overlying a cold bottom layer. Since many older dams are only equipped to draw water from the bottom of the dam, water that is much colder than the natural river temperature is released downstream, causing cold-water pollution (see Figure 1).

Is cold water pollution a problem in NSW?

Cold water pollution is one of the key factors behind the reduction in the range and abundance of native freshwater fish species in NSW. It is estimated that up to 3,000 kilometres of mostly lowland river habitat in NSW is affected by cold water pollution.

At least 140 dams in NSW have a water depth of 15 metres or more that could stratify seasonally, forming a cold bottom layer of water. However, not all of these cause cold-water pollution, because their outlets are configured to allow water to be released at different levels, or the quantity of water released may be relatively small. However, nine dams are likely to cause severe cold-water impacts (Figure 3). What are the effects of cold water pollution?

Cold water released from dams has several impacts on a river system:

These can affect temperatures in river systems many hundreds of kilometres downstream from the storage. Initial research has indicated that cold water pollution can result in the death of juvenile native fish and reductions in growth rates.

What does this mean for our native fish?

Native fish, along with other aquatic animals such as turtles and frogs, are cold blooded. Their survival, growth and reproduction depend on the temperature of their environment.

Cold water pollution can reduce the growth of fish and even reduce their chance of survival. A study by NSW Fisheries at Burrendong dam compared silver perch survival and growth in cold and warm water releases. Results showed 100% survival in the warm channels (18 to 24oC) compared to 25% survival in the cold channels (12 to 14oC). This is illustrated in the graph below. Significantly more silver perch survive in the warmer water channels than in the cold water channels. 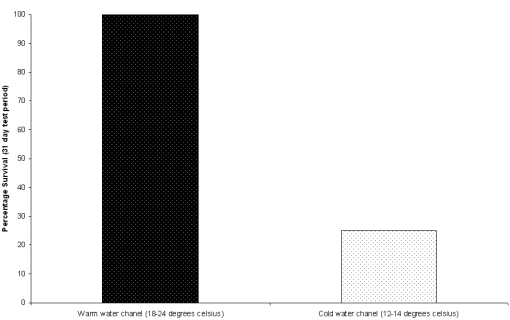 Growth and weight responses were similar to those for survival, with fish in the warmer channel growing significantly better.

Fish will not breed if conditions are unfavourable. Even in the right season for breeding and with appropriate rises in the river, breeding may not occur if seasonal temperature changes and thresholds are not reached (see Figure 4). As a result of cold water pollution, native warm-water fish may fail to breed, they may breed late in the season, fish eggs may fail to hatch or the young may die or develop more slowly.

Young fish depend on zooplankton blooms as a food source. Low water temperatures can delay or prevent the development of these blooms, eliminating an important food source. 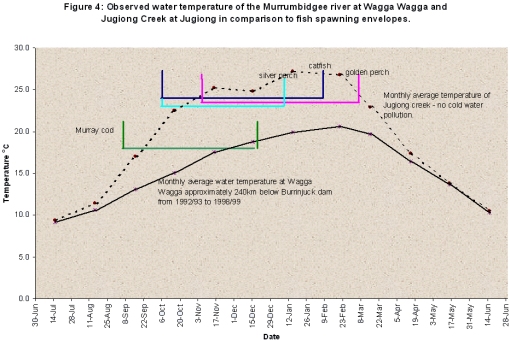 Figure 5: Observed water temperatures in comparison to fish spawning envelopes.  The solid line shows the termperature of the Murrumbidgee River at Wagga Wagga where cold water pollution occurs. This site is approximately 240km below the dam. The dotted line shows water termperature at Jugiong Creek at Jugiong where there is no cold water pollution.

The lack of seasonal temperature variation has been found to reduce the numbers of macroinvertebrate species that would normally be expected in the warm summer period. Studies show that eggs of mayflies do not develop if temperatures are too low.3