Australian native fish require unimpeded access along waterways in order to survive and reproduce. Both fresh and saltwater fish move within waters at different times to access food and shelter, to avoid predators, and to seek out mates. Of the 83 species of freshwater fish in south eastern Australia, over half migrate at least once as part of their life cycle. Some species can migrate thousands of kilometres while others only move a short distance.

Barriers to fish passage prevent the migration of native fish species and can have severe implications for these populations. In extreme cases, barriers can result in localised extinctions. This has occurred for golden perch populations above several large weirs and dams.

Habitats where food and shelter are degraded may also impact upon the migration of native fish species.

The cumulative effect of barriers to fish passage has been identified as a Key Threatening Process to the continuing survival of several species of native fish in Australia.

Case Study - Review of barriers to fish passage in Sydney

Stream connectivity and habitat diversity are critical components of healthy rivers, and as with elsewhere in Australia, the free passage of fish within urban rivers, streams and estuarine environments is a critical aspect of aquatic ecology in coastal NSW.

This project assessed 356 instream structures across 39 local government areas and identified 161 as disrupting fish passage within the former Sydney Metropolitan Catchment Management Authority region (now Local Land Services), prioritised them in order of importance and presented options for their remediation.

This project acted as the precursor for a number of other fish passage barrier assessments across the state and the Bringing Back the Fish project.

Case Study - Review of barriers to fish passage in the Namoi

The former Namoi Catchment Management Authority (now Local Land Services) funded the The Assessment and Modification of Barriers to Fish Passage in the Namoi Catchment project.

This project identified barriers to fish passage in the Namoi catchment and in doing so provided the NCMA with information necessary to undertake targeted remediation works.

A total of 496 instream structures across eight Local Government Areas within the catchment were assessed with respect to their impacts on fish passage. 162 of these structures were identified as fish passage barriers, with 31 of these listed as high priority and requiring immediate remediation. Included in these structures were nine causeways, eight weirs, five fords, five water gauge structures, three culverts and one water-supply pipe. Remediation of fish passage at all 31 high priority sites will open up approximately 1000km of additional free passage for fish in the Namoi catchment.

In general, bridges and arch structures promote natural, unimpeded stream flow, allowing the free movement of fish underneath the structure during a wide range of hydrological conditions.1 However, bridges that are built too low, or whose piers and footings constrict the channel, can affect hydrological flows (e.g. excessive velocity and turbulence) and aquatic habitat conditions. 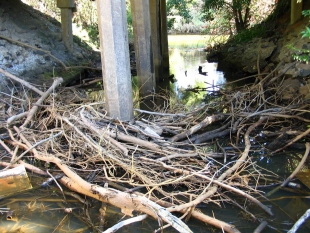 Culverts are waterway crossings with round or box-shaped cells, designed to convey flow beneath the roadway. Culverts can restrict fish passage by increasing flow velocities and turbulence and reducing flow depth through the structure.

Did you know ...
A fall of only 10cm is enough to create a barrier that will block fish passage.

If a piped or box culvert displays excessive headloss (i.e. > 100 mm) across the outlet, the crossing also acts as a physical barrier to migrating fish until the crossing is 'drowned out' during a flood (ie, water is flowing over the top of the crossing). High water velocities and excessive headloss (otherwise known as the waterfall effect) are of particular importance to Australian native fish, which are known for their poor swimming performance compared to their northern hemisphere counterparts.2

Culverts can also restrict fish movement because they can form a long, dark space that fish won't enter. Debris building up at the opening can also physically block fish passage. 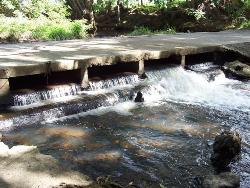 Low-level crossings such as causeways are generally constructed at or near bed-level and are designed to convey water across the road surface as sheet flow. Although causeways drownout relatively quickly, fish passage is often obstructed due to excessive headloss and shallow flow depth (< 100 mm) across the structure. In some cases, causeways may possess low-flow pipes beneath the roadway that can further restrict fish passage as outlined above for piped culverts.

An example of a ford. The surface of the causeway should be at the level as the streambed to avoid creating a barrier.

Alternatively, fords are formed directly on the channel bed (i.e. “wet crossing”), which eliminates the waterfall effect observed on the downstream side of causeways. However, ford designs can potentially impede fish passage during low flow periods if the crossing promotes shallow flow depths across the structure.

In tidal reaches, waterway crossings (especially those over agricultural drains) commonly incorporate floodgates that restrict fish passage between flood events. Between floods, floodgates are generally maintained in the closed position thus ensuring a complete blockage to fish migration between estuaries and tidal tributaries.

The impact of weirs 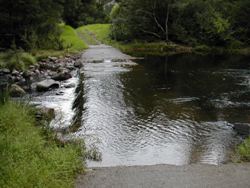 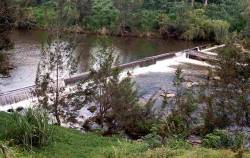 A weir is a structure built across a defined watercourse that restricts flow and causes water to pond behind the structure. Weirs include dams, locks, regulators, barrages and causeways. Although weirs have long served as an important asset for many towns and properties, in recent years it has become apparent that such developments have come at a significant environmental cost.

In a recent study, it was found that certain types of weirs can cause the death of 95% of golden perch larvae and 52% of Murray cod larvae, whereas other weir designs had significantly less impact.

There are thousands of weirs on NSW rivers: there are at least 4000 weirs within the Murray Darling Basin alone. In some waterways, substantial lengths of stream have been altered from a free-flowing to impounded habitat. The Figure below illustrates the distribution of weirs on NSW waterways. What this can look like at a local scale is illustrated by the following map of weirs on the former Northern Rivers catchment management area (now Local Land Services). 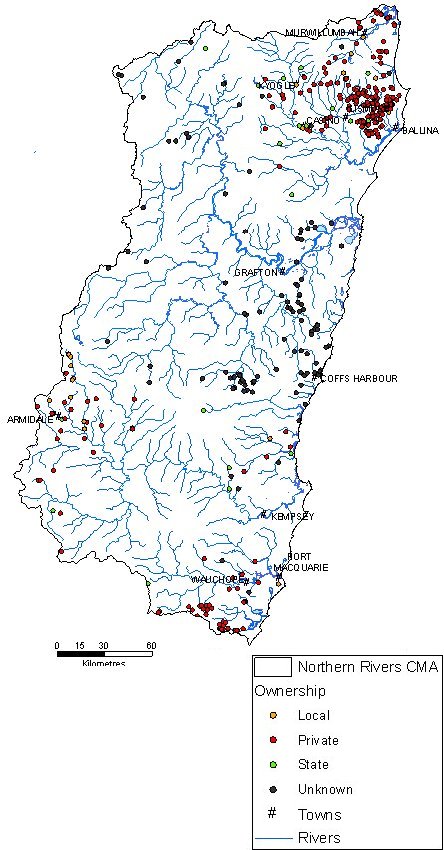 The location of weirs within the Northern Rivers catchment management area

This shows that the majority of weirs are private, with very few being controlled by the State. A lack of knowledge about the distribution, condition and impact of weirs makes understanding the status of fish habitats difficult. NSW DPI is both mapping and assessing weirs and other barriers to fish passage across the State in order to understand and improve fish habitat.

A floodgate is a top-hinged flap installed across a waterway to prevent water entering particular areas. In NSW, large areas of coastal floodplain and natural watercourses have been artificially drained and floodgates installed.

Floodgates were first installed in Australia in the late 19th century. The majority of these structures were installed after major flood events in the 1950s and 1970s. These were usually constructed from steel. Standard floodgates operate passively as one-way valves. Water is prevented flowing upstream by the hinged flap and yet can flow out when the downstream water level allows. They are designed to prevent inundation of low-lying floodplains by high tides or flood events. An example of a closed floodgate An example of an open floodgate.

Floodgates have been shown to have a range of unintended impacts. These include:

Floodgates can reduce estuarine fish stocks, as they deny juvenile fish and invertebrates access to habitat and food upstream of these structures. Species of fish that can be affected include Australian bass, sea mullet and school prawns. For example the following graph shows the change in abundance of juvenile yellow fin bream resulting from active floodgate management. Active floodgate management involves opening floodgates during non-flood periods to allow for fish passage and tidal flushing. Case Study - The impact of floodgates in the Clarence, Macleay and Tweed floodplains

The fieldwork for this project took place in the floodplains of the Macleay, Clarence and Tweed Rivers. In the field, we compared species assemblages, water quality and habitat in floodgated drainage systems with those sampled in creeks of similar dimension but without floodgates. Fish and invertebrates were collected using a seine net (10 m x 2 m x 6 mm stretch), and subsequently counted and identified to species level. 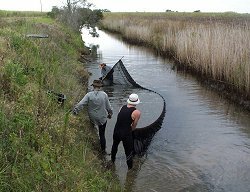 The results from the first year show that floodgates act as physical barriers to juvenile fish and prawns; commercially and recreationally significant species, such as yellow-fin bream (Acanthopagrus australis) and school prawns (Metapenaeus macleayi) are almost absent in gated systems, but occur in high numbers in non-gated systems. Our results from the second year indicated that fish passage greatly improves with regular and frequent openings of floodgates. Numbers of juvenile fish and prawns, including yellow-fin bream, school prawn, sea mullet (Mugil cephalus), and tailor (Pomatomus saltatrix) increase significantly in drainage systems with actively managed floodgates, and become comparable to non-gated systems. Interestingly, juveniles move into drainage systems, regardless of whether the system is a modified natural creek, or an engineered drain. In contrast, in drainage systems with un-managed floodgates, juveniles of these species are still absent. The results also suggest that fish passage is not improved with installation of a mini-sluicegate on a floodgate, nor with installation of vertical lift-gates.