The Stocky Galaxias is a small, stocky fish. Distinguishing features include:

Stocky Galaxias can be confused with various other galaxid species.

Individuals have been recorded to grow to 103mm long and 13g in weight, but they are more commonly seen at 75-85 mm long. Newly hatched larvae are around 9.4mm long on average.

The Stocky Galaxias is only known from one locality – the headwaters of Tantangara Creek, upstream of the Tantangara Reservoir, Kosciusko National Park NSW. It is restricted by trout to a 4km stretch of the creek above a waterfall, approximately 4km from the source. Very little is known about the ecology and environmental requirements of the Stocky Galaxias. Its present distribution and habitat is a small, cold, clear and fast flowing alpine creek, flowing through an open forest of Eucalypts, low shrubs and tussock grass, which are often covered in snow during winter. The creek consists predominantly of riffle and glide with substrate composed of bedrock, boulder and cobble with smaller amounts of pebble and gravel and sections of silt.

Why is the Stocky Galaxias threatened? 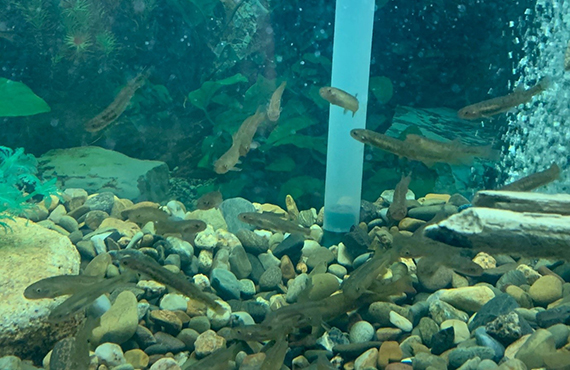