Monitoring is fundamental to improving the management of threatened species. There is much speculation, but few available data on trends in koala populations. DPI Forest Science has monitored annually the koala metapopulation of the hinterland forests of northeast New South Wales since 2015.

The program evolved out of a three-year study of koala occupancy in hinterland forests between 2015-2017 (Law et al. 2018). This study used novel passive acoustic methods to record koala bellows and site occupancy at 171 sites across a variety of forest types in State forests and National Parks. An extensive area (1.7 million hectares) of better-quality koala habitat was targeted for surveys using a model derived for the study area (Law et al. 2017).

Acoustic monitoring is undertaken in the spring breeding season at a subset of sites (~ 60 sites per year). About 50 sites were sampled immediately after the extensive bushfires in 2019 and a larger complement was completed in 2020. The program comprises four years of pre-fire data representing a strong baseline for ongoing koala monitoring and an assessment of the impacts and recovery from the 2019 fires in these forests. Given naturally low densities of koalas, we expect just one male koala to occupy the area sampled by each acoustic sensor (see FAQs for more details).

As with earlier years, the 2019 and 2020 field programs were across State forest and National Park and were undertaken by Forestry Corporation of NSW and NSW DPI with funding from the NSW Forest Monitoring and Improvement Program, independently overseen by the Natural Resources Commission and a steering committee including NSW agencies and experts from leading universities.

An extensive dataset has accumulated through the program comprising:

Identification of koala bellows was undertaken in collaboration with the Ecoacoustics lab at Queensland University of Technology using an algorithm that identifies the low frequency, oscillating nature of the koala bellow. These were then manually validated.

It is important to point out that stable occupancy of a metapopulation can include increasing and decreasing subpopulations, whereby connected populations that go extinct can be recolonised. Monitoring over such a regional scale is important for assessing the changing status of species together with monitoring that focuses intensively on individual populations. Also, in north-east NSW many koala subpopulations are under threat along the coast from increasing urbanisation. These coastal populations are not part of the hinterland forests monitored in this study. Interpreting the Impact of 2019 Fires 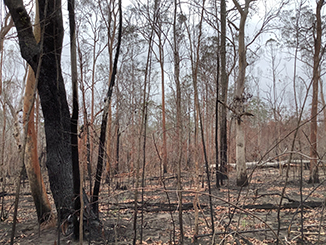 The continued stable trend in occupancy after fire needs to be interpreted carefully. Firstly, our monitoring attempted to be representative of the fire extent on koala habitat. Given about 30 % of modelled koala habitat burnt on the north coast, we accordingly monitored koalas at 16 burnt sites (33 % of all sites monitored in 2019) with varying degrees of severity and fire extent, which we assessed in a 1 km radius around each site using Fire Extent and Severity Mapping (FESM; Department of Planning, Industry and Environment 2019). Ten sites mostly experienced high severity fire and 6 mostly experienced low severity fire.

Overall, koalas were detected at 81 % of the 16 burnt sites sampled, which was equivalent to the detection rate at unburnt, but drought afflicted sites, in 2019. All three high severity fire sites without koala detections had high severity fire extents of >50 % of their surroundings. Two of these were in Kiwarrak State Forest and a third was in Bellangry State Forest. At other burnt sites where koalas were detected, refuge areas occurred in the surrounding landscape (i.e. high fire severity covered < 50 % of the surrounding landscape) or fire severity was lower. Example sites where this was the case included parts of Kiwarrak State Forest, Royal Camp State Forest, Myrtle State Forest and Bungawalbin National Park, among others.

It is also important to acknowledge that these data describe koala occupancy for the metapopulation, not local density at a site. There is no doubt many occupied sites experienced a severe decline in koala density. We are quantifying this scenario at three sites where we are estimating density before and after the fires, one being a low severity fire, one moderate severity and one high severity. Analysis of these results is underway, but it is evident that a large impact occurred where fire severity was high and widespread persistence was recorded where severity was low.

Other post-fire surveys either focused mostly on burnt sites, targeting sites with a pre-fire assessment (Phillips et al. 2021) or sampled unburnt as well as a range of fire severities (DPIE 2020). These surveys achieved a mixed response in relation to detecting koalas, though koala detection dogs confirmed persistence at varying levels in all the study areas sampled (DPIE 2020). An important distinction between DPI’s regional acoustic surveys and local site-based surveys (e.g. detection dog surveys cover ~ 1 ha) is that acoustic sensors sample koala presence over a much larger area (~30 ha) and so may be more likely to encompass fire refuges.

In summary, the metapopulation of koalas in north-east of NSW has been resilient to the 2019 wildfires at the regional scale, with 70 % of habitat remaining unburnt and, where it did burn, there was typically a mosaic of fire severity and extent, including unburnt refuges. While there is no doubt particular local populations of koalas were severely impacted, especially where higher severity fires were more extensive, post-fire surveys suggest that this rarely resulted in local extinction, at least in the hinterland forests with high connectivity that were monitored in this and other studies.

Climate change is predicted to lead to greater fire frequency, which is expected to burn a cumulatively greater extent of koala habitat in the future. Greater fire frequency is consequently predicted to increase fire impacts on koalas as refuge areas may shrink and koalas have less opportunity to recolonise. Refuges of koala habitat that avoided past high frequency fires have previously been mapped in north-east NSW (Law et al. 2017), but this should be updated to include the 2019 fires.

Information from the study (e.g. spring 2020 results) will be progressively posted on this site and the website for Forest Monitoring and Improvement Program.

What is a metapopulation?

A metapopulation consists of a group of spatially separated populations of the same species which interact at some level.

What is site occupancy?

Site occupancy is a standard population surrogate used by ecologists to compare different areas or trends in populations over time. It differs from presence/absence data in that modelled occupancy accounts for imperfect detection of the study species. Typically, many sites are surveyed to characterise occupancy in a metapopulation.

What are koala bellows?

Bellows are primarily produced by adult male koalas both to avoid male-male interactions by functioning as a signal of body size and to attract females, and thus they indicate breeding activity in a population. Given bellows are mostly produced by adult koalas, they are expected to generally represent resident individuals.

What is the size of a survey site?

One acoustic sensor samples an area slightly smaller (~ 30 ha) than the expected home range of one adult male koala. Male home ranges do increase during the breeding season, however current tracking data demonstrates they are generally smaller than the detection zone of each sensor and confined to stable areas (DPI unpubl. data). 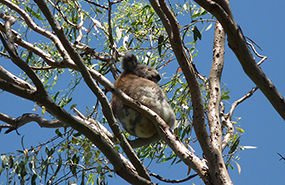 A new koala tracking project began in 2018 and is still is underway in north-east forests of NSW on the mid north-coast.

The project is using GPS collars on koalas to track their movements throughout the forest which will enable DPI researchers to look at the effectiveness of koala protections in State forests and relative use of young regenerating eucalypts after harvesting compared to mature forest that is excluded from harvesting.

Eight Koalas have been collared so far providing outstanding information on what tree species and sizes offer important browse as well as other aspects of habitat use like use of ridges vs gullies.

The findings of the research will be considered by the Natural Resources Commission who is independently commissioning and overseeing other research projects investigating how koalas respond to regeneration harvesting on state forests as part of the NSW Koala Strategy. Between 2015 and 2017, DPI forest scientists undertook a large-scale study on the status and response of koalas to timber harvesting in the north-east forests of NSW. Koalas are surprisingly difficult to survey due to their low densities and cryptic nature, especially in tall remote forests. Surveys were focused on forests of the hinterland, ranges and tablelands of North East NSW, rather than the coastal strip where urbanisation is the main threat to koala populations.

SongMeters were deployed at nearly 200 sites over 7-14 nights to record male bellows over three breeding seasons (>14,500 hours of recording). The project relied on cutting-edge software developed by the Queensland University of Technology to automate the call detection process from thousands of hours of recordings.

Results showed that, on average, 65 per cent of survey sites (the small zone surrounding each SongMeter) were occupied by at least one koala, which was much higher than expected based on previous surveys using alternative methods. We found that occupancy was influenced by elevation, cover of important browse trees, site productivity and extent of wildfire in the last 10 years.

Occupancy was not influenced by timber harvesting intensity, time since harvesting, land tenure, landscape extent of harvesting or old growth forest extent. The highest bellow rate (23 calls per night) across all sites surveyed was recorded at a site in Kiwarrak State Forest that was recently heavily harvested (though with a mosaic of harvest exclusions). Overall, forest treatment had no statistically significant effect on bellow rate.

Extrapolation of occupancy across modelled habitat indicates that the hinterland forests of north-east NSW support a widespread, though naturally low density koala population that is considerably larger than previously estimated.

A paper detailing the results of this study has been published (Law et al. 2018).

Predictive models that map species distributions are a useful management tool for guiding and informing on-ground management of threatened species. Forest scientists at DPI have developed a model for the koala (Phascolarctos cinereus) in North East NSW. The model is used by the Environmental Protection Authority to predict where areas of differing habitat quality for koalas are likely to occur.

The focus was to help guide decisions on timber harvesting in forests by identifying likely koala habitat. Ultimately, this could lead to better on-ground implementation of koala management for public state forests and private forestry areas.