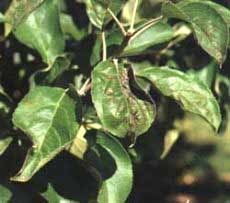 Scab is the most serious disease of apples and pears in New South Wales. Although it is costly to control, neglecting or wrongly applying control measures may reduce fruit yield and quality. Reduced yield is caused by the death of blossoms, shedding of immature fruit, scabbing, cracking and distortion of fruit, and loss of vigour of trees after leaf infection and subsequent partial defoliation. Scab may also develop extensively in stored fruit from infections established before harvest.

The symptoms and epidemiology of the disease are similar for both apples and pears. The following remarks about apples apply also to pears unless otherwise stated.

Black patches develop on the flower stalks. These patches extend, and soon flower and stalk may blacken, shrivel and die. 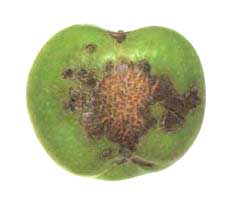 The spots on apple fruit are at first small, black and circular. They may be so numerous that as they grow they coalesce to form large scabbed areas. The central, older parts of the spots become brown and corky, and growth of the fruit in these areas is greatly restricted. Fruit infected early in the season becomes badly distorted and deep cracks may develop across the scabbed areas.

Infections which occur just before harvest can be invisible when fruit is picked, but will be apparent when fruit is removed from cool store some months later.

Infected twigs develop a flaky appearance, when the bark becomes blistered and ruptured in places. Twig infection is rare with apples, but more common with pears.

The fungus is spread by wind and rain, and is favoured by warm, wet weather conditions.

Throughout the growing season the scab fungus lives and grows on the tree, producing vast numbers of spores that spread the disease.

The fungus can live over the winter in infected areas on twigs and bud scales, but it mainly survives the dormant season within the leaves that fall in autumn. During winter it forms special structures in the dead leaf tissues, and in these structures, called perithecia, spores called ascospores are formed. By late September many perithecia are mature. When it rains they discharge their ascospores which are carried by air currents onto the trees. Most early or primary infection comes from this source.

If an ascospore lodges on a leaf or fruit, germinates, and penetrates into the tissue, a scab will appear 2–3 weeks later. The scab largely consists of a mass of dark-coloured spores called conidia. These conidia may infect other susceptible parts of the tree when carried there by rain and wind.

Infections caused by conidia are sometimes called secondary infections. They may occur from the time of the first primary lesions until the end of the season. The more spores emitted the greater the chance of infection. Consequently, in a season favourable to scab infection, the disease is easier to control in a clean orchard than in a heavily infected one.

The following conditions are necessary for infection:

Infection occurs most rapidly at temperatures between 17°C and 24°C. The trees must remain wet for longer periods for infection to take place at temperatures outside this range.

The wet period can be continuous, but intermittent wet periods can also induce infection if there are not more than 8 hours of dry weather between them. If the wet periods are intermittent, add their durations together until a period of about 8 hours of continuous tree dryness occurs. If it is sunny and drying is quick and thorough, you can assume the danger period has passed 8 hours after the trees have dried. Any further rain will then be taken as the starting point for the next danger period.

Slow-drying conditions with high relative humidity make it difficult to be sure the trees are really dry. In these cases, extend the 8 hours dry period needed to end an infection period by a ‘safety’ margin of a few hours, especially if the total wetting time is almost long enough to make up an infection period. It is better to apply a curative spray that may not be needed than to risk losing a crop by not spraying.

Early in the season, before any conidia are present (before any scab lesions are visible), the infection period begins from 7 am, regardless of when the wet period began during the night. This is because the fungus needs light, as well as moisture, to trigger the release of ascospores. Ascospores are not present in the orchard air at night, so rain falling after 6 pm cannot induce infection. If rain begins during the day, judge the infection period to start at the same time as the rain.

When conidia are present on scab lesions, judge the infection period to begin at the same time as the rain, irrespective of the time. The table below (known as the Mills Table) details how long trees must remain wet at particular temperatures for infection to occur.

Note: The most essential item of equipment you need to make those calculations is a maximum and minimum thermometer. From these readings you can estimate the average temperature for the wet period.

Adapted from Mills and Laplante 1954, Cornell Extension Bulletin No.711.

Scab control depends on spraying with protective fungicides or eradicant fungicides, or a combination of both.

Protective spraying keeps the susceptible parts of the tree covered with fungicide. Spores lodging on these parts are killed before they can establish an infection. Frequent sprayings are necessary to keep the tree covered with fungicide, especially in October and November. At this time highly susceptible new growth is developing rapidly; ascospores are abundant and conidia may also be present. In wetter districts every apple and pear orchard should be equipped so that the entire area can be sprayed thoroughly in 2 or 3 days.

Control by protection may be supplemented by curative treatment using curative fungicide after infection periods. Some fungicides have the ability to kill the invading fungus for a limited period after infection first started. This is known as the ‘kickback’ period, and varies from 0 to 5 days, depending on the fungicide. Some of the fungicides with a long kickback action have a relatively short protective ability. Consult the Orchard plant protection guide (also available from your local district horticulturist) or your chemical supplier for up-to-date information on these fungicides. If a heavy infection period occurs at about the end of a spray interval, begin spraying as soon as the trees are dry. Apply the spray within the kickback period of the fungicide.

If a heavy infection period occurs in the early part of a spray interval, protection would be adequate and it should not be necessary to apply a curative spray. If, however, the rain was particularly heavy, it would be desirable to renew the protective cover of fungicide as soon as possible. In less severe cases, shorten the spray interval by several days.

Postharvest foliage sprays are a very useful supplement to scab control, especially after a season of high scab incidence. The principle of control by treatment after harvest but before leaf-fall is to prevent the fungus surviving in the leaves over winter.

By preventing the development of perithecia in the dead leaves, the spray eliminates the source of ascospores. Every infected leaf missed by these sprays reduces the effectiveness of the treatment. The spray must be very thoroughly applied, particularly to the underside of the leaves. Do not apply the spray before the end of April, since leaves falling before April produce very few ascospores. Most ascospores come from leaves falling after mid-May.

A complete program for the control of apple and pear scab is given in the Orchard plant protection guide, which commercial growers can also obtain from their district horticulturist.

The apple scab fungus in some orchards has developed tolerance to some newer fungicides which have been used excessively. To prevent such tolerance arising in an orchard, a number of different fungicides should be used in a disease control program.

It is the responsibility of the person applying a pesticide to do all things necessary to avoid spray drift onto adjoining land or waterways.