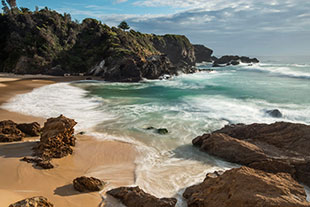 Batemans Marine Park on the NSW south coast extends from the most northerly point of Murramarang Beach near Bawley Point to the southern side of Wallaga Lake entrance at Murunna Point.

The park was established in April 2006 and its zones and management rules commenced in June 2007. Changes to rules regarding fishing from some ocean beaches and headlands were introduced in June 2018.

Why Batemans Marine Park is unique

Within the park, Montague Island Nature Reserve is:

Large aggregations of morwong, trevally and snapper are found off Montague Island, along with pelagic species such as kingfish, albacore and yellowfin tuna that follow the warmer currents.

Many of the park's highly significant coastal lakes and lagoons, which include Durras, Brunderee, Tarourga and Brou Lake, have been recommended for protection. These smaller lakes intermittently close and open to the sea, creating the unique environments predominantly found along the state's south coast.

The park lies within the country of the Yuin people, who maintain a strong connection to the area's sea country.

Batemans Marine Park offers plenty of activities and exploring. Check out what to do and see: