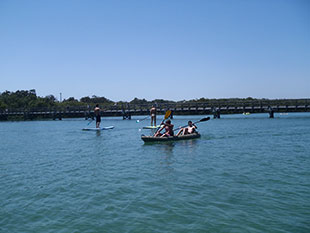 The park was established in November 2002 and its zones and management rules commenced in May 2006. Changes to rules regarding fishing from some ocean beaches and headlands were introduced in June 2018.

The marine park conserves many subtropical marine habitats which support high levels of biodiversity including some threatened and protected species.  It is strongly influenced by the East Australian Current (EAC) as warm waters from the north come together with cooler waters from the south.

Julian Rocks is home to many fascinating animals, including sharks, rays, turtles, eels, starfish and corals.

Aboriginal communities have lived alongside and used the marine park's resources for many thousands of years. The Bundjalung People of Byron Bay (Arakwal) have a strong association with land and sea in the park's northern parts while the Jali people have a similar association with the southern section.

The marine park takes in many sites of cultural significance to Aboriginal people. It is adjacent to the Arakwal National Park, a protected area declared following the Indigenous Land Use Agreement between the traditional owners and the NSW Government.

Cape Byron Marine Park offers plenty of activities and opportunities to explore. Check out what to do and see: