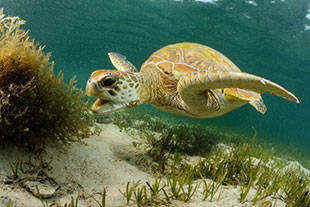 Lord Howe Island Marine Park is approximately 600 km off the NSW north coast and 700 km north-east of Sydney.  It:

The park was established in February 1999 and its zones and management rules commenced in 2004. A review of the park was completed in 2010.

The NSW Department of Primary Industries manages the reserve on a day-to-day basis for the Australian Government.

The combined State and Commonwealth marine parks are the largest marine protected area off the NSW coast.

Lord Howe Island is a narrow volcanic strip surrounded by several small, environmentally sensitive islets. The island is a remnant of a long-extinct shield volcano, dating back millions of years.

The marine environment is internationally significant and features the world's southern-most coral reef.

The waters – a unique mix of warm tropical and cool temperate ocean currents – are home to over 500 fish species, more than 90 coral species and countless other marine species, many only found in the immediate area.

A wide range of habitats include a barrier coral reef and lagoon, and fringing reefs dominated either by coral or macroalgal communities. Lord Howe Island and the surrounding waters were declared a World Heritage site (the first in NSW) in 1982.

Lord Howe Island Marine Park offers plenty of activities and exploring. Check out what to do and see: