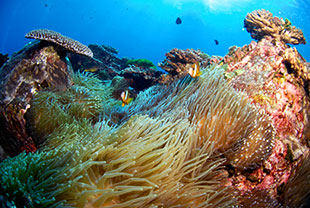 Solitary Islands Marine Park on the NSW North Coast extends north from Coffs Harbour to Sandon River along about 75 km of coastline.

It is approximately 710 km2 from the mean high water to three nautical miles offshore, including estuaries to their tidal limit.

The park was established in January 1998 (prior to that it was a marine reserve since 1991) and its zones and management rules commenced in August 2002. Changes to rules regarding fishing from some ocean beaches and headlands were introduced in June 2018.

The marine park Zoning Map (PDF, 1938.4 KB) and User Guide (PDF, 3110.31 KB) provide information about the current zoning arrangements and management rules in the park. A summary of rules relating to collecting on rocky shores can be found in the Rocky Shore Guide (PDF, 3429.09 KB).

More than 550 reef fish, 90 hard coral and 600 molluscs (shelled animals) species have been observed throughout the park.

Solitary Islands Marine Park offers plenty of activities and exploring. Check out what to do and see: