The local Aboriginal communities within the Gumbaynggirr Nation and Yaegl Nation have strong cultural links with the Marine Park and are actively involved in planning its conservation.

The Gumbaynggirr people are the traditional owners of the land and sea in central and southern section of the park, with some overlap with the Yaegl people in the northern section.

Several Elder groups live adjacent to and use the marine resources from the park, including:

Sites within the marine park have been used for thousands of years for resource use, cultural gatherings and storytelling and are still very significant to Aboriginal communities.

See the Aboriginal engagement and cultural use of fisheries resources policy (PDF, 171 KB) for more information. 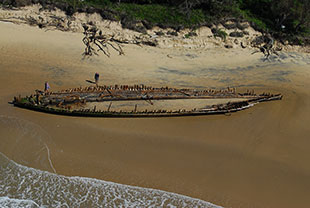 Captain Cook named the Solitary Islands in 1770 during his voyage along Australia's east coast in HM Bark Endeavour.

The Solitary Islands are rich in maritime history and many ships have been lost in or near the area, especially during the 1800s.

A shipwreck becomes historic after 75 years and is protected under the NSW Heritage Act 1977 and the Commonwealth Historic Shipwrecks Act 1976.

The lighthouse at South Solitary Island – considered the most isolated on the NSW coast - began operating in March 1880.

A school education program to raise awareness and appreciation of local maritime history began in 2007.