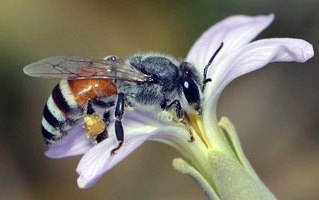 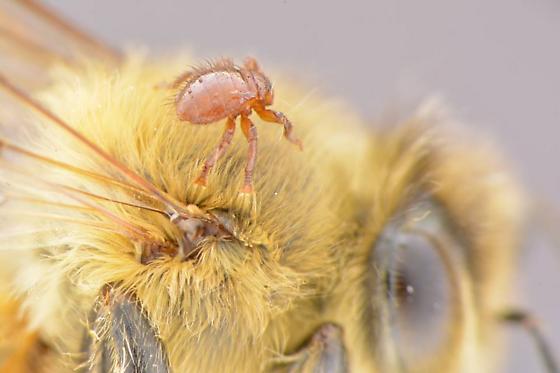 The pests described in this Primefact are prohibited matter under the NSW Biosecurity Act 2015. They are a serious threat to NSW’s apiary industry.

Asian honeybees (Figure 1) are present around Cairns in far north Queensland, and can carry varroa mites. They are a competitor of European honeybees, robbing honey stores and competing for nectar and pollen. Asian honeybee is smaller than the European honeybee, has more pronounced stripes on its abdomen and an erratic flying pattern.

Giant honeybees (Figure 2) are a carrier of tropilaelaps mites. These bees look similar to European honeybees but are larger in size (17 - 20mm long). They nest in single large combs up to 1.5m wide by 1m long.

Dwarf honeybees (Figure 3) are also a carrier of tropilaelaps mites. Nests consist of a single comb (usually less than 25cm width). They are the smallest species of honey bee. They have a thick red/brown band then alternating white and black bands on the abdomen.

Varroa mites (Figure 5) are parasites of honeybees, feeding on the haemolymph (blood) of bee larvae and adults. Symptoms include deformed pupae and adults, and colony decline. They have been detected in Queensland.

Acariasis tracheal mite lives in the trachea of the adult bee. The mites can only be seen under a microscope. Symptoms include drop in population numbers, bees holding their wings at odd angles and bees crawling on the ground.

The tropilaelaps mite (Figure 5) is a parasite of honey bees. They are reddish in colour and about half the size of varroa mites.  Mostly reproduce in the brood but some are found on adult bees. Symptoms include deformed pupae and adults (stunting, damaged wings/legs/ abdomens) and colony decline.

Braula fly or bee lice (Figure 6) live in honeybee colonies. The larval stage burrows under the cappings of honey comb, reducing its commercial value. Brauly fly is present in Tasmania and has not been detected on mainland Australia.

Asian hornet (Figure 7) is not present in Australia. They are predators of honeybees and rob hives of the brood in order to feed their own larvae.

The large earth bumblebee (Figure 8) is found in Tasmania but is not present on the mainland. Bumblebees compete with honey bees for food sources and can damage flowers when taking nectar.