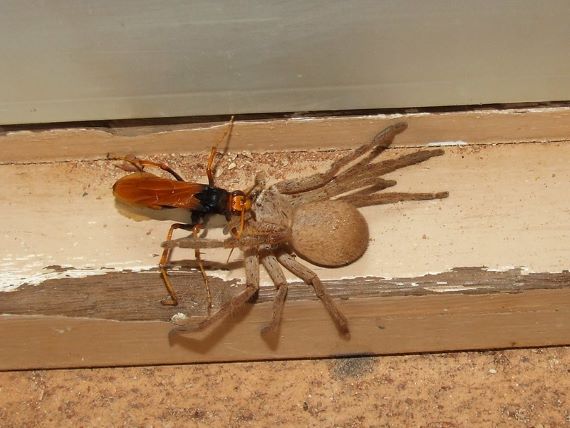 Spider wasps are native to Australia, they do not need to be reported.

There are many spider wasps species found in Australian. The most common species encountered is the orange spider wasp (Cryptocheilus bicolor). They have a black body with two orange abdominal bands, their wing colour is orange and they have an orange head, antenna and legs.

Adult spider wasps can range in size from 5–35 mm and are non-aggressive, solitary species that feed on nectar actively during the summer months. Female wasps prepare nest chambers by dragging spiders to a burrow in the ground, on tree trunks or a nest made out of mud. They paralyse spiders by stinging them and an egg is laid on the spider’s body. The larva hatches and feeds internally on the spider’s bodily fluids.

You may see spider wasps walking rapidly or moving with short hops.

Australian spider wasps are beneficial to the environment as they control spider and aphid populations and other pest insects. They are also pollinators of native plants.