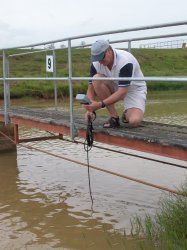 Ammonia is the major waste product of protein or nitrogenous metabolism in fish and other aquatic organisms. The major source of nitrogen compounds in fishpond culture is the protein contained in the feed. Therefore, the rate of ammonia production of fish is proportional to the feeding rate. It is excreted primarily across the gills, and in urine and faeces. Ammonia is also produced during the aerobic decomposition of organic matter by bacteria.

In water, the total ammonia-nitrogen (TAN) occurs in two forms, unionised ammonia (NH3) which is toxic to fish, and the ammonium ion (NH4) which is relatively non-toxic, except at extremely high concentrations. Ammonia can change from one form to the other creating a balance between the two forms. Water pH and temperature influence the proportion of total ammonia occurring as the toxic (NH3) form.

Consequently, water samples are taken for TAN levels in the afternoon when pH and temperature are at the daily maxima. Ammonia levels then decrease during the night. To determine the concentration of the toxic NH3 form, a simple formula is applied using a chart showing the percentage of TAN in the NH3 form at different temperatures and pH values (Table 1). For example when the temperature is 20°C and the pH is 9.4, 50% of the TAN is present as NH3 if TAN is 2.0 mg/l, NH3 is 1.0 mg/l.

High Ammonia - What can I do?