Over 23,900 invertebrates seized including:

Over 2,900 fin fish seized including:

Over 1,490 items of fishing gear/equipment including:

During the busy holiday period of January of 2020, Central Coast fisheries officers were patrolling the banks of the Entrance Chanel. During a routine recreational fishing inspection, one of the fishers became aggressive and abusive towards fisheries officers. Fisheries officers left the scene and worked with NSW police to identify and apprehend the offender.

In June of 2021, the man was charged with Common Assault and Intimidation under the NSW Crimes Act. He was sentenced to serve a 12-month intensive correction order, fined $2,000 and placed on an anger management course.

Seven fish traps, nine Golden Perch, a Murray Cod, a grapnel and a boat, motor and trailer were seized during the operation from the men. Both men faced Court on charges under the Fisheries Management Act 1994 for unlawfully using traps, possessing fish illegally taken as well as using excess and unattended lines.

The 49-year-old Dubbo man was ordered to pay $3300 in fines and costs and issued two 7-month terms of imprisonment to be served by way of intensive correction order. He was also given a Prohibition Order preventing him from fishing in NSW inland waters west of the Great Dividing Range for a period of 5 years.

Tough penalties have recently been imposed on Abalone offenders in NSW Far South Coast local courts. In Bega Local Court, three men from the ACT pleaded guilty to joint possession of 95 abalone (87 prohibited size). The men were apprehended by Fisheries Officers at Baronda Headland, locally known as Cowdroys within the Mimosa Rocks National Park near Tathra.

A 54 year old Deer Park man fronted the Wentworth Local Court for sentencing in the state's far west following his apprehension by a Fisheries Officer in August 2021.

The man spent a day fishing on the Murray River below Lock 11 in the Mildura area, but what he didn't know was that the Fisheries Officer was watching his every move. Over the course of a period of 10 hours covert surveillance, the officer saw the man catch a threatened Silver Perch and a significant number of Golden Perch from his boat. He was then seen to secrete these fish in various locations in his vessel in an attempt to evade detection.

When the time was right, the officer launched his vessel and intercepted the man who was still fishing despite having already exceeded the daily limit for Golden Perch. After locating Golden Perch in an esky and a keeper net aboard the boat, the officer then unscrewed a floor panel of the man's boat and found several more hidden underneath. The officer then retrieved a second keeper net nearby, also containing Golden Perch, that he had seen the man sink in the water and tie off to vegetation earlier in the day.

The Court took a serious view to the dishonest conduct of the man and imposed fines and costs in excess of $15,000. In addition, a 3 year Community Corrections Order was imposed.

A man from Whitton in the NSW Riverina has appeared before Leeton Magistrates Court on February 14 for several fisheries offences.

The defendant was first detected by Fisheries Officers on the Murrumbidgee River upstream of Kooba Forest in the Murrumbidgee Valley National Park. During a covert surveillance operation, the officers observed the defendant using 2 setlines baited with live carp and live redfin before retrieving an un-prescribed wire fish trap from the water that contained one Golden Perch.

The Court heard that the defendant threatened Fisheries Officers at the time of his apprehension and during their interaction with him. Magistrate Thomas took a serious view of the threats made by the defendant and agreed that a strong deterrent was necessary. The defendant was convicted on all charges and was placed on a 12 month Community Correction Order and with associated court costs received a total penalty of $9000.

On Wednesday 2nd March at Bega Local Court, four abalone offenders were sentenced for Fisheries offences. They received a total of $28,000 in fines and $12,400 in professional costs.

The matter related to a targeted patrol by Fisheries Officers from the State-wide Operations and Investigations Group of Baronda Headland within the Mimosa Rocks National Park, near Tathra, NSW.

Four persons were found to be in possession of 185 abalone of which 125 were shucked (removed from shell) and 58 were live and prohibited size.

This was the first time the four persons had come to the attention of Fisheries Officers. All of the abalone and dive gear was seized and the live abalone were returned to the water alive.

At about 3:30am on the 30th January 2022, Fisheries Officers apprehended a 39 year old Canley Vale man in possession of 1237 cockles, at Ocean St Boat ramp, Lake Illawarra. Whilst conducting an inspection on the defendant's vehicle and vessel officers were threatened by the male with a crowbar. The defendant then rammed the Fisheries patrol vehicle with his vehicle. The collision caused significant damage to the defendant's vehicle and the patrol vehicle. Luckily the cockles were able to be seized and were returned to the water alive.

The defendant attended Port Kembla Local Court and pleaded guilty to all Fisheries and Police charges.

He was fined a further $1000 fine and 12 month Community Corrections Order for the Police matter, plus he was disqualified for 18 months from driving.

Last year Fisheries Officers from the Northern Regional Mobile Squad were patrolling the Yamba breakwall and inspected a recreational fisher who had failed to pay the Recreational Fishing Fee (Fishing Licence). The angler was not exempt and was unable to provide a reasonable excuse as to why the fee had not been paid. The angler was subsequently issued a $200 infringement notice.

Upon receiving the penalty the angler elected to have the matter heard in court. The matter was heard in Maclean Local Court, after being listed a number of times, where the fisher ultimately plead guilty to the charge. The Magistrate found the matter proven without conviction, but the fisher was ordered to pay $3500 for the Department's professional costs.

While any fisher that receives a fine from the Department has the right to elect to have the matter determined in court, they also need to be prepared to pay a lot more than the amount of the original penalty notice if they take this option. The easiest way to avoid this situation is to ensure that you are adhering to the rules and regulations, including paying for the Recreational Fishing Fee or hold the appropriate exemptions.

The Commercial Fishermen was found guilty by the magistrate and fined $3550.

In 2021 Fisheries Officers were on routine night patrol around the area of Crowdy Head and Harrington. It was pleasing to see that most fishers were compliant and had an adequate understanding of the New South Wales fishing rules and regulations.

However upon inspection of 2 males returning to the boat ramp from an evening of fishing, 2 prohibited size Snapper were located within a compartment of their vessel. As a result of this and considering other relevant factors, a Penalty Notice of $500 was issued to one of the men.

The penalty notice was disputed and the man elected to have the matter heard in court. It was heard in Parramatta Local Court where the defendant subsequently plead guilty to the charge. The Magistrate reviewed the matter extensively, noting both pleas for leniency and other prior fisheries offences. The Magistrate did not accept the fishers claims and as a result, the fisher was found guilty of the offence. The fisher was ordered to pay a total of $2200, which included the Departments legal costs. 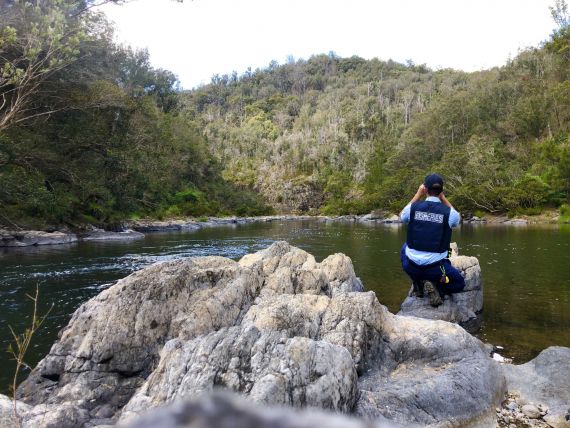 Fisheries officer conducting surveillance on a river near Coffs Harbour 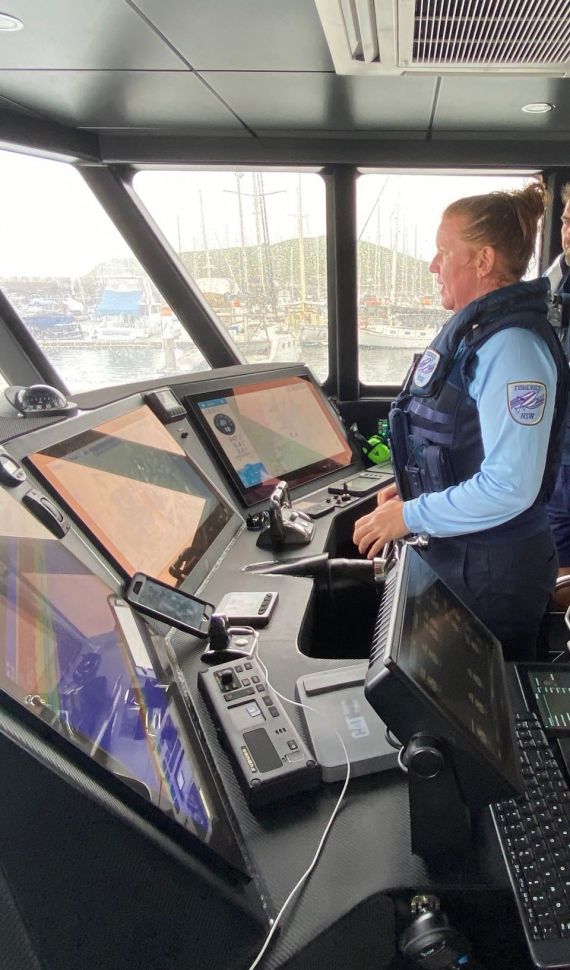 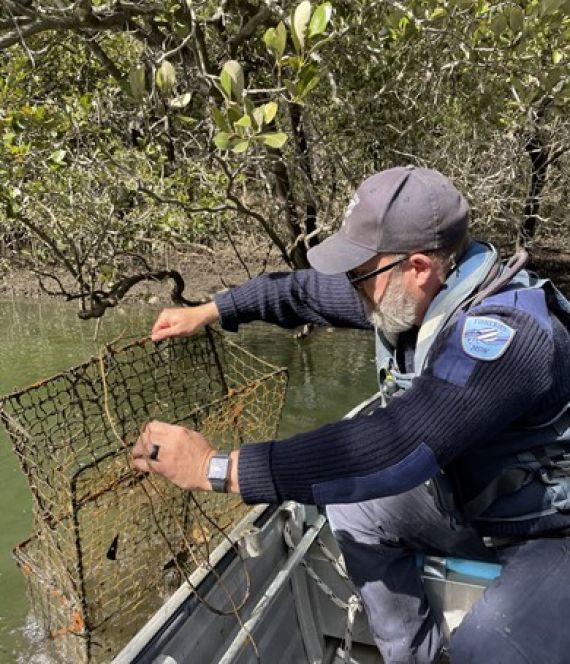 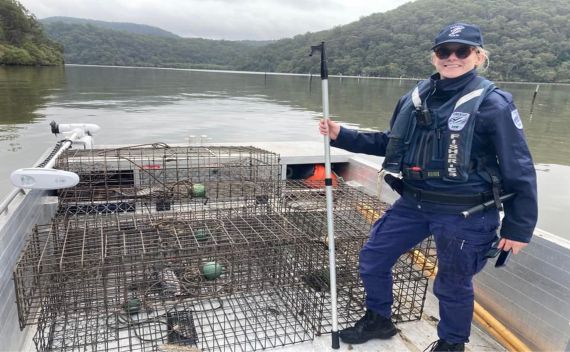 Fisheries officer with illegal traps seized from the Sydney area 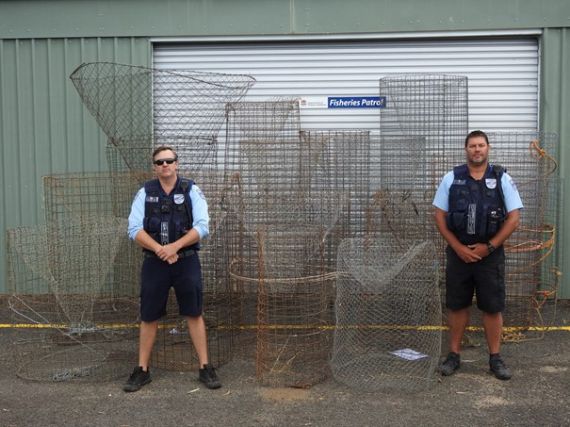 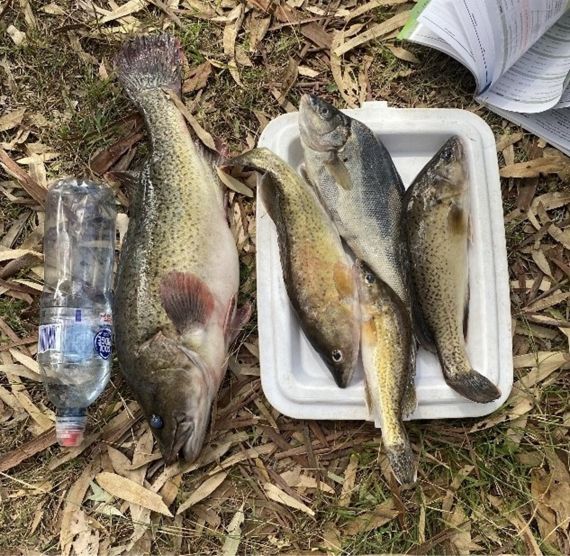 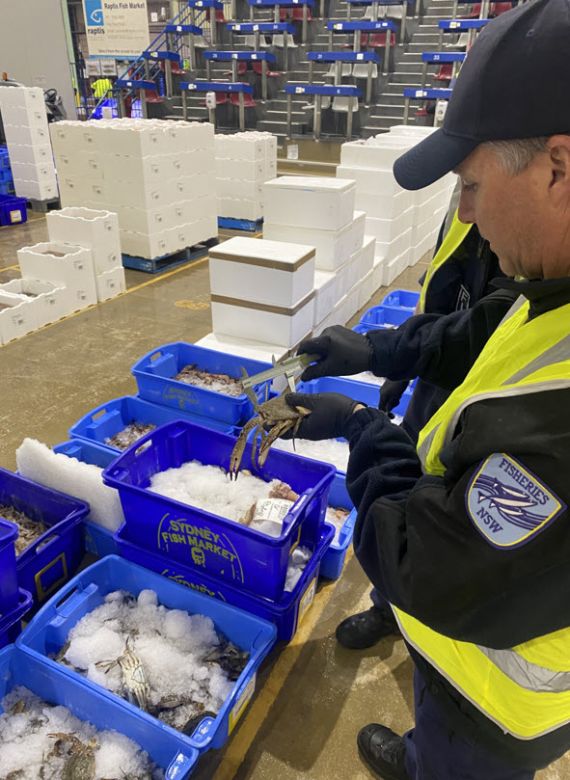