Learning more about the mighty swordfish This research aims to learn more about movement and behaviour of swordfish and the post-release survival of fish caught in the newly emerging day time deep-drop fishery off the NSW coast. Tagging is being carried out by using experienced anglers to deploy 10 pop-up satellite tags into swordfish caught during 2019/ 2020 in NSW waters.

How does a pop-up satellite tag work?

Pop-up satellite archival tags (PSATs) are used to track the movement of marine animals, particularly highly migratory species such as sharks, tuna and billfish. The tags are like mini computers that are externally attached to the fish and travel along with the fish whilst logging information on water depth, light levels and temperature, and gathering information on its location (geolocation).  This allows us to gain a greater understanding of the behaviour of the fish, their migratory patterns and catch and release survival.  The great benefit of satellite tags is that they do not have to be retrieved to collect the recorded information. After a predetermined time (twelve months) the tag decouples from the fish and ‘pops-off’, floating to the surface. The tag then transmits the data that it has stored whilst it has been underwater to orbiting satellites that pass overhead. This data is then relayed back to DPI.

The project will provide us with data on the exciting new recreational fishery including information on the timing and availability of swordfish in NSW, whether swordfish tend to return back to the same grounds seasonally and their suitability for catch and release. DPI is undertaking the project with the Australian National Sportfishing Association (NSW) and NSW Game Fishing Association.

This project also includes the “Great Swordfish Race” which plans to provide an interactive experience to improve our understanding of the mystical and iconic “gladiator of the ocean” along the east coast of Australia and foster angler stewardship in this new fishery.

Once the first fish has been tagged, the race will be underway for the individual swordfish that travels the furthest distance whilst tagged.

We will keep you updated on the Race and the broader project on this page and on the DPI Fisheries Facebook page, including when fish have been successfully tagged. Information on movement of the fish will be provided when the tags pop-off the fish and their movement data is streamed back to us via satellite.

Why we are undertaking the project

The new method of deep dropping for swordfish has revealed that swordfish are now more accessible than ever before to recreational fishers along the east coast of Australia. It is important that we learn more about this fishery, to enable it to grow and maximise its potential whilst ensuring the sustainability of the fishery is maintained.

The data from this project will be used as part of a larger project being undertaken by Dr Sean Tracey of the Institute for Marine and Antarctic Studies (IMAS), Hobart, with similar objectives completed in Tasmania and currently underway in Victoria. 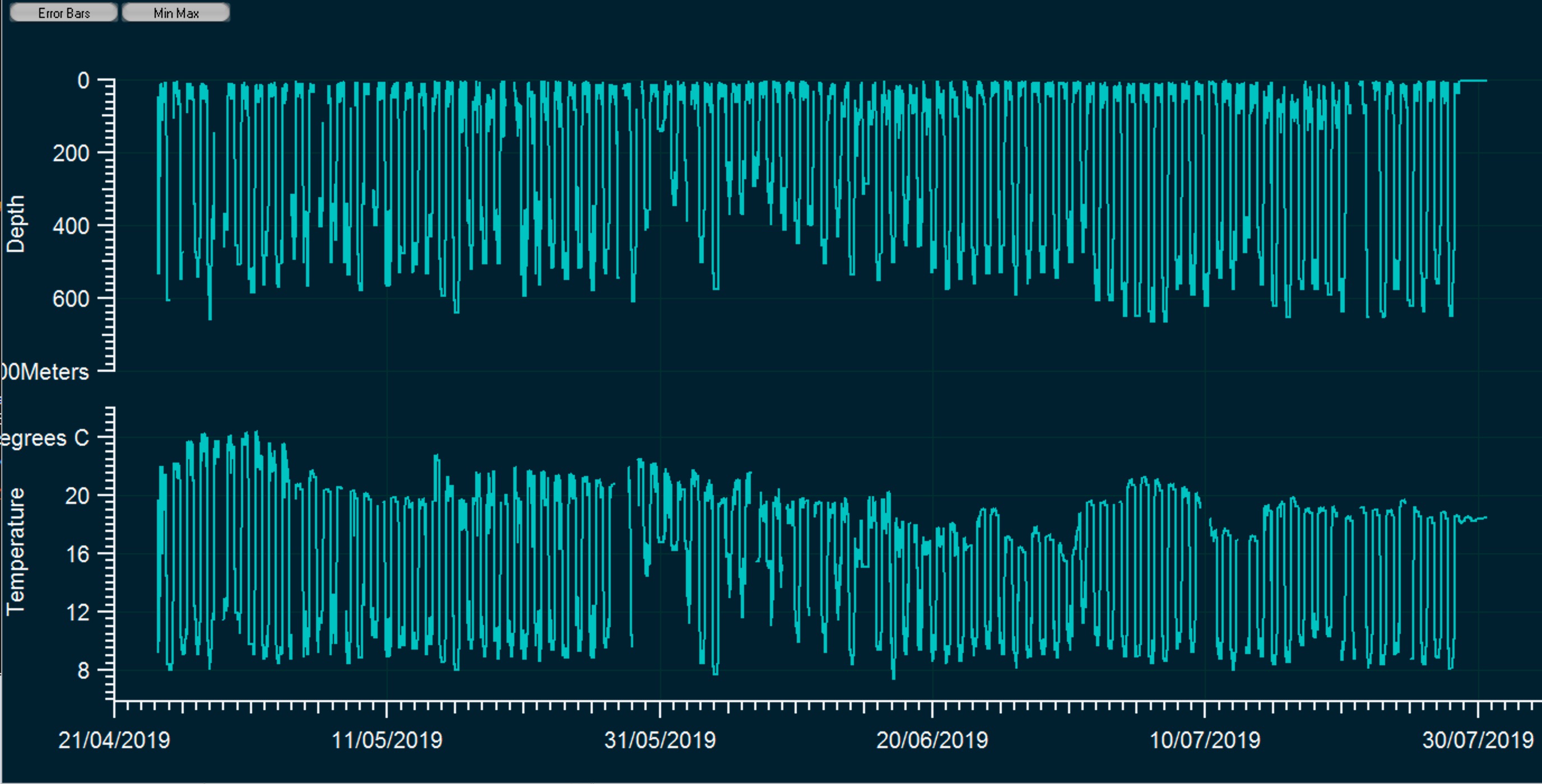 The depth data shows that the swordfish carried out the well established diurnal pattern of diving deep during the day (around 400 - 600m+) and rising near to the surface at night. There appears to be some change to the behaviour around the end of May, where the daytime dives don’t go as deep (150 – 300m+) before the normal dive pattern to 500m+ resumes. You can see the surface water temperatures were relatively high at around 24 degrees when the fish was first tagged off Sydney and they steadily drop off to around 19 degrees when the tag popped off west of Lord Howe Island. The fish headed south towards the south east corner of Australia before it meanders eastwards and then heads on a more northerly bearing. 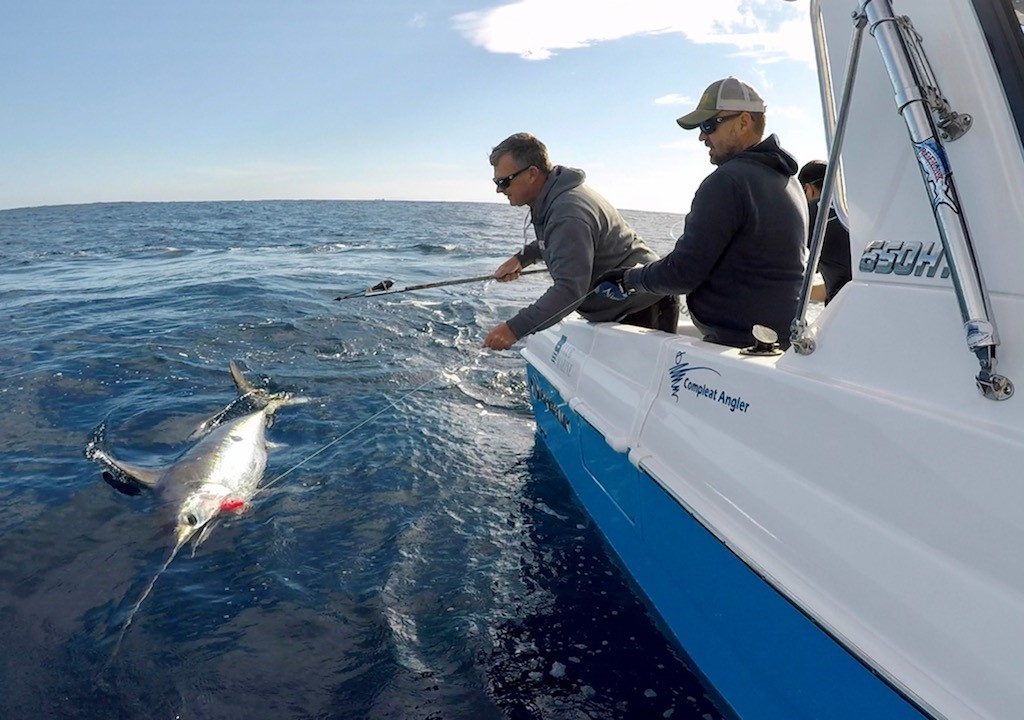 The depth data shows that the fish carried out the typical pattern of diving deep during the day (to around 500 - 650m+) and rising near to the surface at night. There looks to have been a minor change to the behaviour around early to mid-September where the daytime dives don’t go as deep as normal (300 – 450m+) before the normal pattern of dives to 500m+ resumed.

The surface water temperature increased (from around 16 degrees C) as the fish moved north from Victorian waters up to NSW waters, with the surface temperature reaching over 20 degrees for a period of over week in early August. The swordfish appears to travel east from its tagging location and then north to a point directly east of southern Sydney before moving west towards the bottom of the continental slope and then tracking back south towards the border with Victoria before moving north east up to the point of pop-off, east and well offshore of the Batemans Bay area. 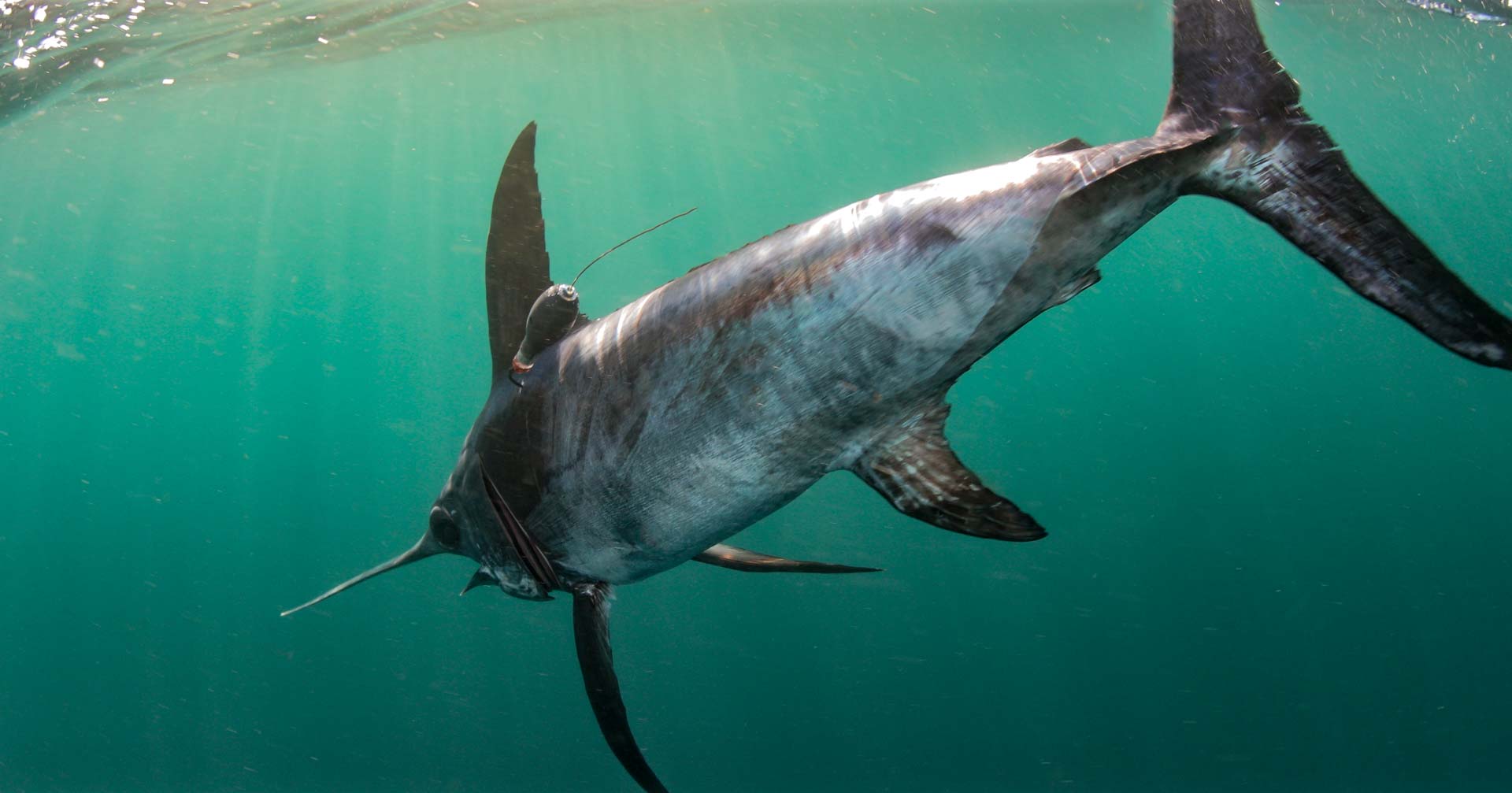 As with previous satellite tagged swordfish, the depth data shows that the fish carried out the typical pattern of diving deep during the day and rising near to the surface after sunset. It is believed that this is linked to the swords foraging for food in the Deep Scattering Layer (DSL). You can see that during the period coming up to the full moon on 12 August, the fish tends to remain slightly deeper at night - this is likely to be linked to the DSL sitting slightly lower during the period with the higher illumination from the full moon. The normal daytime diving depth appeared to vary from around 400 - 700m+ with some shallower and deeper dives over time.

On tagging, it appears that the fish moved steadily headed east for around 90 NM before moving in a general south westerly direction, over the Victorian border and tracking towards the entrance of Bass Canyon where it was caught by a longline vessel at the end of September. During that time the surface water surface ranged from around 18.5°C to around 14.5 °C with the deepest dives dropping the recorded temperature regularly down to 8 °C and below, with the lowest temperature being around 6.5 °C.