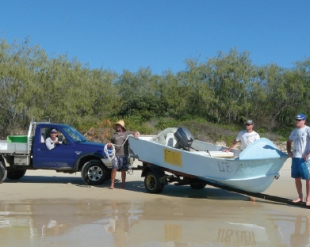 What is the ocean hauling fishery?

The NSW seafood industry is a vibrant industry which employs more than 4000 people and is worth more than $80 million at first point of sale.  The health benefits of seafood are well known and the ocean hauling fishery provides the community with fresh local seafood, bait and high value exports.

Beach hauling was one of the first methods of fishing carried out along ocean beaches by European settlers in Australia and is part of the history of many communities along the coast. 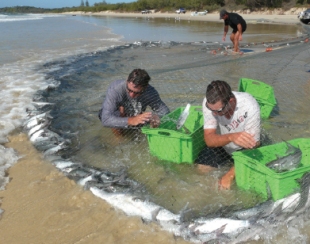 Placing the catch into boxes for transportation

What fish are they catching?

An average 4500 tonnes of fish is taken each year, mainly sea mullet, Australian salmon, luderick, and yellowfin bream. Sardines, blue mackerel and yellowtail scad are also major species and are processed both for human consumption and bait for recreational fishers. This catch, together with the other species taken in this fishery, is worth around $11 million at first point of sale.

Is the fishery environmentally sustainable?

Yes - A rigorous environmental assessment of the fishery has been completed in accordance with commonwealth and state law. NSW DPI conducts monitoring and scientific studies to world’s best standard, working with the seafood industry to ensure long term sustainable commercial harvesting. Whilst some schools of fish are targeted, management arrangements allow sufficient numbers of the population to continue to migrate and spawn so that there are fish for future generations.

How does hauling impact on fish numbers?

In general, adults of the species caught in the ocean hauling fishery inhabit inshore waters including coastal waters, bays, coastal lakes and estuaries. These fish regularly move between estuaries and, in the case of sea mullet, bream and luderick, a part of the population appears to migrate over considerable distances each year.

How is hauling done?

When a school of fish is spotted the net boat starts out from shore deploying the hauling lines and net behind. Once beyond the fish, the boat heads for shore and the beach crew takes hold of the hauling lines or net.

The net is then pulled towards the shore, either by hand, winch or vehicle, with the fish that don’t escape being concentrated in the central part of the net.

The net is then landed and the fish removed as soon as possible. The catch is placed in boxes with ice to ensure the fish are kept fresh.

Since beach hauling usually targets specific schools of adult fish there is little by-catch of unwanted fish. Those caught are returned to the water as soon as possible. Hauling nets have little effect on coastal habitats as they are generally used over bare sand.

What happens to the catch?

Fish are transported to markets or processing factories. None of the catch is wasted and value adding is undertaken wherever possible. For example, after sea mullet roe and fillets are processed for export and human consumption, the remainder of the fish is sold usually as bait for recreational and commercial fishing.

Licensed commercial fishers may sell their catch direct to the public, while fish sold for commercial purposes, for example to restaurants, may only be sold through registered fish receivers. This helps to ensure compliance with NSW food safety standards.