Fact sheets are available to outline key management and reporting arrangements for the Sea Urchin and Turban Shell Restricted Fishery.

In Australia, commercial fishing for sea urchins occurs in NSW, Victoria, Tasmania, and South Australia. The taking of turban shell commercially is mainly restricted to NSW waters. The NSW Sea Urchin and Turban Shell (SUTS) restricted fishery is relatively small with few divers participating. The main constraint on development in NSW at this time is high processing costs and limited domestic markets.

Most commercial fishers dive for sea urchins and turban shells using surface supplied compressed air (hookah). Because the catch is taken manually, there is no by-catch of other species.

Fishing for sea urchins is generally undertaken when the roe is well developed. Purple urchins are harvested primarily from October to March when the quality of their roe is best. Red urchins have an extended spawning period (from February to October) and specimens with firm roe of marketable volume and quality are found year round. Turban shells are harvested year round for their fleshy foot. A minimum legal length of shell has been set for the Sydney turban snail (Turbo torquatus) and Military turban snail (Turbo militaris). 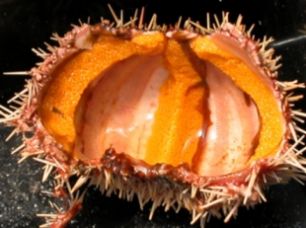 A number of the fishing sub-regions have been closed to commercial SUTS fishing since 1994 to provide reference points for stock assessment purposes and as refugia. Following concerns about potential over harvesting, a total allowable commercial catch for red sea urchins of 60 tonnes per year has been in effect since 2002.

A Total Allowable Commercial Catch (TACC) for Red Urchin is set each year by the statutory and independent Total Allowable Fishing Committee. The TACC is proportionately allocated to each fishing business holding a sea urchin endorsement in the fishery.

A nominal TACC of 60 tonnes has been set for the 2020 fishing period (1 January to 31 December 2020) as determined by the Total Allowable Fishing Committee. The Committee’s report contains further detail regarding assessment and the determination.

Regional catch limits and a commercial minimum size limit commenced in October 2019 to promote sustainable harvest and to reduce the risk of localised depletion of red sea urchin stocks.

Regional catch limits are in place for each calendar year fishing period. Regional limits have been recommended by the independent Total Allowable Fishing Committee under the determination of Total Allowable Catch for red sea urchin.

Catches will be monitored and fishing will cease for the remainder of the fishing period in regions where the limit has been reached. No regional closures are currently in effect for the 2020 fishing period.