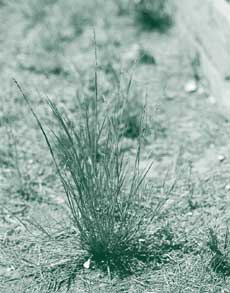 Although essentially a warm-season species, box grass can grow throughout the year in semi-arid and arid areas in response to rainfall. It is regarded as a useful forage species, even in dry times after it has hayed off. Whilst extensive stands can be found in central-western New South Wales, it does not usually make up a large proportion of the pasture. Crude protein can range from 11 to 15.5%. It is most common under the canopy of eucalypts such as bimble box (hence, its common name) but is also common beneath shrubs and fallen branches where it is protected from grazing. The presence of dormant buds below ground allows it to regenerate following heavy grazing. Paspalidium constrictum is a very drought tolerant species. It may be more frost-tolerant than the related species P. jubiflorum.

P. constrictum is an erect or spreading tussock grass 10–60 cm in height, most commonly about 30 cm high. Characteristically this species has a thickened, knotty and hairy butt. Stems are wiry and branched and leaves are up to 15 cm long, dull-to grey-green, often with scattered long hairs, and with a small hairy ligule. The seed head, which is borne a short distance above or amongst the leaves, is a narrow panicle of up to 10 'spikes' (each 2–3 cm long) which are pressed against the stem. Spikelets (Spikelet - consists of one or more florets and is the basic unit of the inflorescence in grasses) have a marked constriction at about a quarter of their length from the base. This species flowers throughout the year in response to rainfall. Plants are slender and wiry on poor sites but grow into dense leafy tussocks on fertile soils.

Paspalidium is essentially a tropical genus but extends to temperate regions in Australia where there are 22 species and most are believed to be endemic. Earlier reports, however, suggest that some species are also native to other parts of the world such as India. Box grass occurs in all mainland states of Australia but is mainly confined to drier areas of the inland slopes and plains.

Occurs naturally on red sandy loam to clay loams, occasionally on gravelly soils of hills, but rarely on clays. It is most common, and productive on lower slopes and flats that receive run-on water.

Occurs in a variety of semi-arid and arid plant communities, but is probably most common in the bimble box - pine and to a lesser extent, mulga areas of eastern Australia. Here, it is associated with other 'western' species (e.g. of Digitaria, Chloris, Thyridolepis, Eragrostis) as well as Austrostipa and Aristida.

As the culms (Culm - a grass stem) disintegrate rapidly after the plant hays off, timing of seed harvest is critical. The seed head and seed are similar to those of Warrego grass, although as a seed producer, box grass appears to be less prolific. P. constrictum can be successfully harvested using brush harvesters, but finding dense harvestable stands can be difficult.

One study of seed germination found that older seed (24 month) had a higher germination percentage than young (6 month) old seed but germination was very low (<5%) at all ages. Other reports, however, indicate that reasonable germination rates can be obtained for seed less than two years of age, suggesting that time (i.e. seed maturity) or season of collection may be important. In the interim, it is suggested that seed be stored for about a year and that the likely need for high sowing rates be anticipated.

P. constrictum seed germinates over a range of temperatures (20–35°C) suggesting a late summer or a spring sowing.