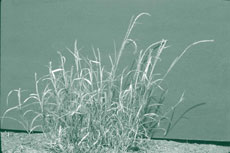 Astrebla lappacea is a long-lived (up to 30 years), warm season perennial grass which is palatable to livestock even when it is dry. Crude protein levels range from 4.7–10.8% and phosphorus 0.21–0.43%. Mitchell grass provides one of the most stable and economically important pastures in the semi-arid areas of eastern Australia. There are four species of Mitchell grass in Australia of which curly Mitchell Grass is the most widespread. 'Yanda' is a variety of this species bred by NSW Agriculture and selected for high seed yield, superior dry matter and leaf production as well as increased proportion of green leaf growth in winter.

A. lappacea is a densely tufted perennial with most of the base below ground. White rhizomes provide the mechanism for this plant to spread vegetatively. A. lappacea varies between 30–90 cm in height. Seed heads, (sometimes multiple), are an open spike (Spike - an inflorescence with spikelets attached to the axis with no stalks. In grasses, lateral branches may be termed spikes), with spikelets (Spikelet - consists of one or more florets and is the basic unit of the inflorescence in grasses) in 2 regular rows along one side. Culms (Culm - a grass stem) of this species vary greatly in length, (from a few centimetres to over one metre), they are smooth without hairs and are often branched at the nodes. Leaves are hairless and have a rough texture. A. lappacea leaves tend to curl when hayed off hence the name 'curly' Mitchell grass. 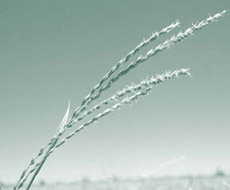 This species is the most widespread of the four Mitchell grasses found in Australia, throughout drier areas (<500 mm rainfall) with a summer dominant rainfall pattern. Best suited to heavy grey cracking clay soils which are capable of storing subsoil moisture over the summer months. The most extensive A. lappacea grasslands occur in north western New South Wales and central west Queensland.

A. lappacea is associated with barley Mitchell grass (A. pectinata), Queensland bluegrass (Dichanthium sericeum) and Flinders grass (Iseilema membraceum). Generally, in New South Wales, where a greater incidence of winter rainfall and a less dominant rainfall pattern occurs the composition of Mitchell grasslands alters to that found in Queensland. The most outstanding differences being a greater proportion of shrubs (family Chenopodiaceae) and winter growing medics in New South Wales.

Unlike many other native grasses, Astrebla spp. will retain a high proportion of ripe seed on the inflorescence (Inflorescence - a group of flowers borne on a stem) (or seed head). Seed yields have varied from 50 to 100 kg/ha (naked caryopses) for wild stands.

Harvesting can be undertaken at anytime over the summer months following good rainfall. The use of periodic irrigation is likely to mean multiple seed harvests can be obtained in any one growing season.

A. lappacea can be easily harvested with conventional crop headers or brush harvesters. Conventional headers need to have a low drum speed and reduced airflow, screens need to be adjusted so that both top and bottom screens are fully open.

Storage in dry cool environment is essential. Seed should be greater than 12 months of age when used and has a shelf life of about 5 years. Germination percentages should lie between 60–90%, it is rare for this species to have lower values for germination.

Maximum germination percentages (>90%) can be achieved at temperatures between 20–40°C. Ideal sowing times are September/October or January/February avoiding the hottest part of summer when the soil surface dries out quickly. Astrebla spp. has a high water requirement and therefore it is best to sow when the soil moisture profile is close to full. Conventional seed bed preparation techniques for a cereal crop will apply to paddock preparation for Astrebla spp. Good rainfall or irrigation post sowing will assist in successful field establishment.

Naked and fluffy seed can be sown using conventional machinery. Buffel drum seeders have also been successfully used to sow fluffy seed. Seed can be broadcast into a weed free seedbed or into wheat stubble. Aerial seeding has also had some success. A light harrowing after broadcasting or aerial application will assist in achieving good soil/seed contact. For seed production, under irrigation, sowing rates greater than 8 kg/ha are recommended, for dryland pastures 1–2 kg/ha. Seed is sown shallow, at no more than 1 cm deep. Ideal sowing times are early or late summer.

Seedlings appear to have little tolerance to Atradex® and Glean®. For advice on herbicide recommendations contact your local NSW Agriculture agronomist.

A specialised root system found on mature plants allows this species to persist through droughts and under heavy grazing. Whilst this species is long-lived, recruitment of new seedlings occurs only infrequently. Astrebla spp. responds well to moderate grazing or cutting which tends to stimulate tillering (Tiller - aerial shoot usually lateral and basal and more or less erect) and seed production. As this species ages both the number and size of inflorescences are reduced, however, cutting and irrigation may help to promote new growth. A. lappacea is susceptible to frost and floods.