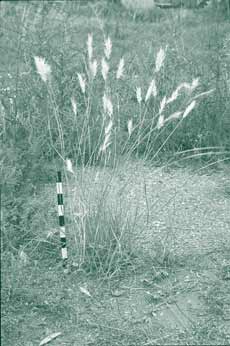 Austrodanthonia caespitosa is a cool season (C3), palatable species that can produce green leaves all year round if adequate soil moisture is available and is generally considered a valuable pasture species. Most of its growth in central western New South Wales is made in late winter to early spring and it usually flowers in later spring. Seed heads appear white and fluffy, the characteristic that leads to its common name, 'white top'. This species has a reputation for prolific seedling recruitment and seems to respond well to moderate grazing.

A. caespitosa is a tufted perennial 0.2–0.9 m tall with a base 0.12 m wide. The stems can be smooth and slender with 2–4 hairless nodules. Leaves are 0.3 m long, flat narrow and sometimes hairy. The flower head is compact, shortly branched and when mature appears bleached and fluffy with 10–30 spikelets (Spikelet - consists of one or more florets and is the basic unit of the inflorescence in grasses). An individual plant can have four to nine flower heads which are light green or pale coloured. Florets (Floret - the flowering part of a grass (includes the lemma and palea); the term is also used if some parts are absent and can refer to a lemma only) are lobed, narrow, 12 mm long and ending in fine bristles. The body of each floret is 4–6 mm long with a lower ring of short hair and an upper ring of tufted hair 4–5 mm in length.

A. caespitosa is distributed throughout the southern areas of New South Wales, South Australia and Western Australia as well as throughout Victoria and Tasmania. This covers a climate range of hot arid to cool moist conditions. Central New South Wales is perhaps its northern limit. 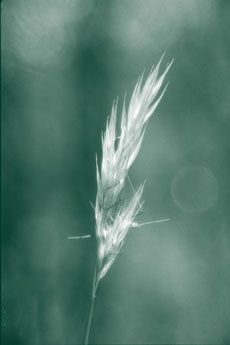 This species is found on varying soil types and it appears to establish easily on clay to heavy clay soils, especially along the Riverine Plains where it is associated with gilgai formations

Vegetation associations can vary depending on location and soil type. On the Riverine Plain A. caespitosa can often be found with Austrostipa scabra and A. nodosa. It is also often associated with Chloris truncata.

Harvesting time can differ depending on the location of the species. Around Deniliquin, (NSW), the growing season is mainly after autumn rains and peak production is often reached in spring. Further south seed can be harvested later, e.g. Tasmanian populations can be harvested in mid summer. In cool moist environments with a reliable winter dominant rainfall pattern, such as in Tasmania and Victoria, seed is produced in response to day length. Conversely in hot semi-arid environments of central western New South Wales, control of reproduction appears to be more opportunistic and growth followed by flowering can occur whenever adequate rains fall. Harvesting in the northern more arid regions of NSW should therefore follow specific rainfall events rather than season.

To-date hand, vacuum and brush harvesting have proved to be successful for harvesting seed of this species. Some processing may be required as seed is extremely hairy. Hand separation and the clipper have proved to be useful techniques for processing seed. Conical threshers followed by aspiration to remove trash can be used to process the seed to give naked caryopses (Caryopsis - the indehiscent fruit of most grasses with a single seed, the testa (seed coat) of which is fused with the pericarp (outer wall)).

Seed should be stored for more than 6 months to avoid any problems with the primary dormancy period and lemmas (Lemma - the outer bracts at the base of a grass spikelet; usually two glumes are present) and paleas (Palea - the upper husk of a grass floret enclosing the flower) should be left intact. Seeds should be stored at ambient temperatures and protected from sunlight and vermin.

Optimum germination percentages are achieved at 15°C for seed that is greater than 6 months old. Sowing conditions can vary between autumn and early spring depending on available water. The likelihood of rainfall may be more important than temperature when determining sowing date. Although the seeds are small, sowing depth should be restricted to just below the surface (2 mm). Broadcasting seed has also been successful however, moisture conditions become critical with this procedure. When sowing in a dryland situation fluffy seed should be used but under irrigation, good germination rates can be achieved using naked caryopses.

Broadcasting seeds on disturbed surfaces has resulted in good establishment rates. Seeds can also be sown at a shallow depth using tynes. Conventional seed boxes have proved unsuccessful as the fluffy nature of the seed causes major problems with bridging and clinging. However, if naked caryopses are used, then conventional small boxes are satisfactory. A light harrow following broadcasting will assist in providing good soil/seed contact. Seed has also been successfully sown using band seeders or the crocodile seeder in lower rainfall areas.

Producing a weed-free seedbed is essential prior to sowing, as this species has shown little tolerance to herbicides at the seedling stage.

A. caespitosa shows some drought tolerance and plants may live up to 5–6 years. This species handles grazing well and probably requires some grazing to flourish. An absence of grazing for extended periods results in a decline in plant numbers and longevity.