Two species of the genus Elymus L. (both indigenous) are recorded in Australia, E. scaber, with two varieties (var. scaber and var. plurinervis) and E. multiflorus. This native grass is generally considered to have high forage value, but it is usually only a minor component of pastures. It is frost tolerant remaining green in the coldest conditions, has a high protein content (10–36% crude protein) and produces quality forage in the late-winter early-spring period. 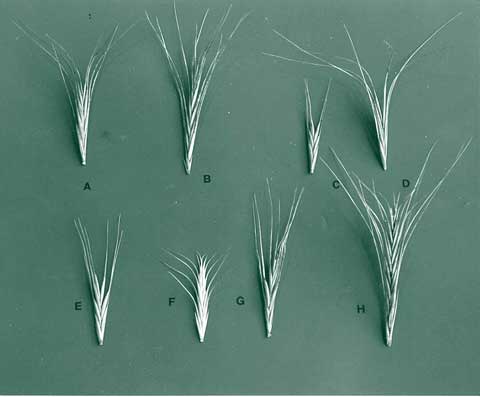 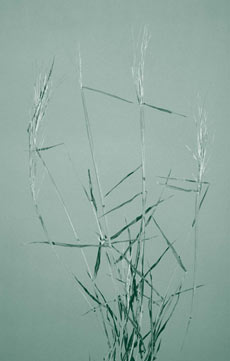 The leaves exhibit some degree of twisting (characteristically a 'half twist') and large clasping auricles (Auricles - appendages at the leaf-blade/sheath junction of some grasses. Auricles are usually in pairs but only one may be present and this is termed a sheath lobe) occur in the collar region. The leaf surface may be smooth, rough or softly hairy, but not shiny. The flower head is elongated, with the glumes shorter than the lemmas (Lemma - the outer bracts at the base of a grass spikelet; usually two glumes are present) remaining on the pedicel often with the lowest floret (Floret - the flowering part of a grass (includes the lemma and palea); the term is also used if some parts are absent and can refer to a lemma only). Spikelets contain few to 10 or more fertile florets with the uppermost florets remaining underdeveloped. The awns (Awn - an elongated bristle-like appendage attached to the apex, back or base of the glume, lemma or palea) may be long, medium or short and the different forms may be classified as different species or sub-species in the future (see Picture).

Long-awned forms occur on a wide range of soil types while short-awned forms are usually found on the heavier soils, e.g. the flood plains and black soils in north-east NSW and south-east Queensland. This species is more sensitive to acid soils than barley but is tolerant of alkaline conditions.

Found in shaded and open areas of both native and older improved pastures. The species is common, but is generally a sparse component of pasture. Concentrations may occur in areas of prior disturbance.

Highest seed production is from inflorescences produced in spring, but flowering may continue spasmodically throughout summer and autumn depending on seasonal conditions. Seed yield will vary greatly as some forms may produce only one seed per spikelet or less (approx. 8–10 spikelets per inflorescence) while other forms may produce 6–8 seeds per spikelet. Cold vernalisation of plants is a requirement for flowering of many ecotypes (Ecotype - a subdivision of a species with distinct characteristics adapted to local or regional conditions).

The seeds begin to ripen from November (or earlier in the warmer, drier areas of its distribution).

Ripe seeds are readily shed, while florets (Floret - the flowering part of a grass (includes the lemma and palea); the term is also used if some parts are absent and can refer to a lemma only) without seed are often retained on the inflorescence. In low seed setting forms, harvesting should be timed to capture seeds before shedding. In high seed setting forms (usually short awned), several non-destructive harvests may be possible—care should be taken to avoid removing immature florets. Hand or vacuum and/or brush harvesting are suitable methods.

Harvested material has been cleaned by brush threshing to remove large trash, and then aspirated to separate the seed. Brush threshing may also be used to remove the awns and smooth the surface of the cleaned seed, but this procedure has not been tested and the effect on germination is unknown.

A figure of 80% germination has been recorded after 8 years storage in the dark, at room temperature and seed has germinated one month after harvesting although some ecotypes may have a short dormancy period of several months.

Awns are easily removed and the seed is enclosed in the lemma and palea which may protect the embryo during processing. Seed size and shape is similar to ryegrass, with approx. 100–200 seeds per gram. Awn weight may account for 7–18% of total weight depending on the form.

Seeds take approximately 4 to 12 days to germinate depending on soil conditions and sowing depth. The seed is fairly large and a finely cultivated seed bed is considered unnecessary.

Sowing in autumn has been successful, however germination of this species in the field can be opportunistic.

Seed with awns have been successfully sown using, no-till technology with direct-drilling using a cone-seeder, and by hand-sowing into a cultivated seed bed. Cleaned seed could be sown using conventional seed boxes suitable for ryegrass, fescue, etc.

Best forage production occurs in late winter and early spring before the beginning of floral production. Limited field experience indicates that a grazing event in July or early August may be followed approximately 3 weeks later by an increase in forage quality and quantity. Seedling recruitment in the field has been observed in autumn, spring and summer where conditions are favourable. Because this species is a short-lived perennial, management should allow for seedling recruitment.