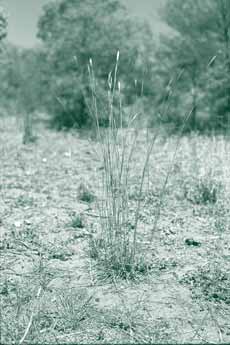 Bothriochloa macra is a warm-season perennial grass that may dominate heavily grazed native pastures. Reports of its forage value vary but it is generally not highly regarded, though the adverse reports may relate more to palatability than to feed quality. Nitrogen analyses indicate that its protein content is similar to or better than many other summer-growing species such as bambatsi panic (Panicum coloratum), Rhodes grass (Chloris gayana) and Mitchell grass (Astrebla spp.). Crude protein ranges between 4.4 and 14.5%. It is highly regarded for its persistence and production during droughts, and for its soil conservation value in waterways and in heavily grazed summer pastures. In eastern Australia, it is most productive in January and February and hays off after frost.

B. macra is a low-growing tussock grass with greenish to brownish sparsely hairy leaves, but up to 1 m high when the slender reddish-purple flowering stems are produced during summer and early autumn, hence the common name 'red grass'. Flowering stems are produced continuously in response to rainfall, and in wet summers may be prolific. The flower head consists of 3 to 6 purplish- or dark-coloured finger-like branches (each 3–8 cm long) with white hairs. The spikelets (Spikelet - consists of one or more florets and is the basic unit of the inflorescence in grasses) are paired in the seed head. One spikelet of each pair is sessile (has no stalk) and is fertile and bears a twisted awn. The other member of each pair is stalked and is sterile. B. macra is difficult to distinguish from B. decipiens, but the latter species is taller and more robust. In addition, B. decipiens has only one stamen in the flower whereas B. macra has three. 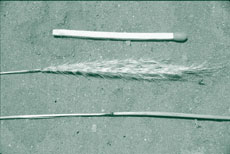 Bothriochloa is a tropical genus but extends to temperate regions in Australia where there are nine species, seven of which are endemic and two naturalised. B. macra occurs in the four eastern states, mainly in coastal, tableland and slopes environments. It occurs on a variety of soil types in humid areas but is restricted to run-on areas, including clay soils, in drier areas.

Although reported as being an uncommon component of the original woodland pastures, B. macra is often associated with Themeda triandra (kangaroo grass) in lightly grazed grasslands. Consequently its seed may be found as a 'contaminant' in kangaroo grass seed. Its more common associates in derived grasslands of the Slopes and Tablelands of New South Wales however, are from the genera Microlaena, Eragrostis, Aristida and Austrodanthonia, of which the latter may be subdominant to or co-dominant with red grass.

Due to continuous seeding in many seasons, seed with varying levels of maturity is likely to be present at any one time, although mature seed is not held on the plant for long. The optimum time for seed collection is when the culms (Culm - a grass stem) are reddish-purple in colour and when spikelets at the tips of the seed heads are just beginning to fall off.

The collection and spreading of seed-bearing hay on newly constructed waterways was a relatively common soil conservation practice at one time. Because seed is borne well above the plants and easily detaches when mature, relatively clean seed can be obtained with a brush harvester. Prior to harvesting, seedheads should be inspected for the presence of smut, a common occurrence in some seasons, particularly towards the end of summer.

Newly harvested seed can contain up to 35% moisture and requires immediate drying to prevent deterioration.

B. macra seed harvested from wild stands generally has a germination percentage of between 40 and 90%. The removal of the lemma and palea may result in enhanced germination but this does not occur consistently with red grass seed and a significant reduction in germination occurs after storage for 56 months. Long-term storage with lemma (Lemma - the outer bracts at the base of a grass spikelet; usually two glumes are present) and palea (Palea - the upper husk of a grass floret enclosing the flower) intact is recommended.

Seed has a short period of dormancy (a few months) though this can be overcome to some extent if seed is germinated in the presence of light.

Seed will germinate between 20 and 40°C, with optimal germination at 25–30°C. B. macra can be sown in spring or early autumn, but late autumn sown seedlings may be damaged by frosts. Field experiments at Canberra found that October -November was the optimum sowing time, mulching increased emergence (probably due to moisture conservation) and the application of fertiliser appeared to have little benefit in terms of establishment. The spreading of seed-bearing hay appears to be a reliable method for establishing red grass. Some success has also been achieved following application of a seed-bearing mulch to weed-free mine overburden on the Central Tablelands of New South Wales.

Although B. macra has been reported to be responsive to fertiliser, it grows particularly well in unfertilised areas. It may eventually dominate pastures of 'improved' species that are in decline due to drought and/or the lack of regular applications of superphosphate. The mechanism by which it dominates native pastures is unclear but it is generally considered that species such as Austrodanthonia would have to be considerably weakened by overgrazing for this to occur. In a Bothriochloa/Austrodanthonia pasture in the Central Tablelands of New South Wales, it was found that gaps present in the pasture were more readily occupied by the growth of existing Austrodanthonia plants than by red grass when grazing was removed. After gaps were filled however, the relative proportions of these species remained constant.

Bothrichloa macra appears to be avoided by stock once the seeding culms become evident so that even grazed stands may produce sufficient seed for harvesting. Heavily grazed stands however, produce few seeding culms. On the Central Tablelands of New South Wales burning in mid-September 1991 promoted synchronous ripening of seed heads.