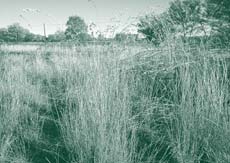 Themeda triandra is probably one of the most widespread of all Australian native grasses. The journals of the early explorers and settlers make frequent reference to this grass. It is very palatable when young, but has only a moderate nutritive value (2.8 to 12.4% crude protein). T. triandra will not tolerate continuous grazing. Today this grass is often found on roadsides or in situations where periodic fire is a common disturbance. The attractive foliage and seed heads, its adaptability and low maintenance requirement has prompted growing interest in its use from landscape architects.

Kangaroo grass is a tufted perennial up to about 1.5 m tall with individual tussocks up to 0.5 m across. The leaves are up to 50 cm long and 3 mm wide and the leaf blades bear sparse hairs. The ligule (Ligule - a membrane or hairs found on the inner (adaxial) surface of the leaf-blade/sheath junction) is a rim of hairs and the leaves are folded in the bud. The seed head is relatively large, often reddish in colour with a drooping appearance. The spikelets (Spikelet - consists of one or more florets and is the basic unit of the inflorescence in grasses) are clustered with several sterile spikelets surrounding a single fertile spikelet that bears a large, black, geniculate and twisted awn (Awn - an elongated bristle-like appendage attached to the apex, back or base of the glume, lemma or palea). Older leaves tend to have a red/brown appearance. In eastern Australia flowering occurs throughout summer from December to late April. 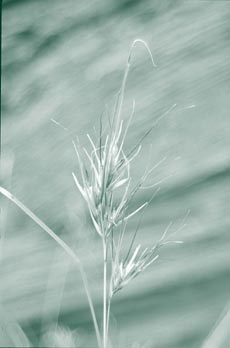 T. triandra has an extraordinarily wide distribution range from the mountains of New Guinea to Tasmania and from the east to the west of the Australian continent. Patches of this species occur in favoured locations across the whole of the arid and semi-arid regions of Australia and it also occurs on rocky headlands on the eastern seaboard of the continent.

T. triandra occurs on a wide variety of soils from sandy soils to heavy clays. There seems to be little association between abundance of T. triandra and a specific soil type. It is often common in areas where moisture collects and grazing is light, such as along roadsides or railway lines.

T. triandra occurs in both grasslands and grassy woodlands as well as under grassy forests. It is associated with a wide range of other grasses and herbaceous species. Kangaroo grass appears to be most common in situations where grazing disturbance is low, water runs on areas and where fires occur periodically.

Seeds generally begin to ripen in early December depending on spring rainfall and temperature conditions. The sterile spikelets are retained on the seed heads and it is often difficult to determine whether the seeds have actually fallen or not. Fertile spikelets are indicated by the black, twisted awn and if the awns are no longer present in the seed heads, then the seeds have all fallen. Approaching optimum harvest time is associated with a change in crop colour from greenish to yellowish brown. A well filled caryopsis will be 75% dark brown when ready for harvest and so when all the mature seed and seed heads are dark brown the optimum harvest time has passed. This transition can occur over 1–2 days if conditions are hot and dry. Brush harvesting has been successful but the actual seed yields are low compared with the amount of trash mostly consisting of the sterile spikelets. Forage harvesters have also been used to successfully harvest kangaroo grass seed when the harvested material containing the seed is to be spread as a mulch rather than for the preparation of pure seed samples.

The twisted awns are relatively easily removed from the fertile spikelets and the caryopses are usually retained within the dark, hairy glumes (Glume - the empty bracts at the base of a grass spikelet; usually two glumes are present). Seed cleaning is not a difficult exercise but large amounts of trash must be processed to obtain a relatively small amount of seed. If material has been harvested with a forage harvester to be used as seed containing mulch then cleaning is not necessary.

Seeds should be dried at relatively low temperatures immediately after harvest. If a forage harvester has been used, then drying a large mass of material sometimes proves difficult. If drying is not practicable, then the mulch should be spread as soon as possible.

Most T. triandra seed samples have some level of dormancy. This dormancy can usually be broken by subjecting dry seeds to diurnal alternating temperatures of 20°C–60°C for about a month. Primary dormancy will usually break down slowly with storage periods of up to 12 months or more.

T. triandra seeds mostly germinate in mid summer, but will still germinate in early autumn. Autumn is generally considered the best sowing time as soil surfaces tend not to dry out as quickly as they do in spring. Because the seeds are fairly large (each seed weighs about 10 mg), they will emerge from about 15 mm in most soil types. Press wheels to firm the soil around the seed are an advantage. If the seed is broadcast then it should be lightly covered with harrows. This species can be sown at about 1 g/m² which would mean about 100 seeds/m² if each seed weighs about 10 mg. If T. triandra is sown in drill rows, seeds should be about 20 mm apart to give a rapid cover within the rows. About 50 g of seed/100 m drill row will give this seed density.

Cleaned T. triandra seed will flow relatively easily through conventional seed boxes without bridging or the seeds clogging the delivery tubes. If banks or sloping areas are to be sown then hydromulching is an effective method with kangaroo grass seed added into the seed mix. In these circumstances, the fibre mulch should be at least 20 mm thick for the best results.

T. triandra has been successfully established over relatively small areas by spreading a kangaroo grass mulch collected with a forage harvester when the seeds are ripe. The mulch is spread evenly on the ground immediately after harvest, or up to winter and left for about 6 months for the seeds to drop out and presumably penetrate the soil because of the hygroscopic (Hygroscopic - responds (twists or opens) to moisture changes) awns. Then if the mulch is burnt in late winter while the soil is still moist, then the seeds will germinate as the soil warms up in the spring. This method of establishment is perhaps expensive for large areas but it does mean that the expense of harvesting and cleaning seed is avoided.

T. triandra seedlings develop relatively slowly following germination. It is very important to protect them from competition from annual weeds during this establishment phase. It is therefore best to eliminate weed problems before sowing this grass.

In southern Australia weed control in late winter/early spring appears to be critical in the survival of newly established plants. At this time, winter plants will tend to overshadow the semi-dormant T. triandra. Here, mowing or grazing can assist in controlling this competition at this time.

Where T. triandra plants are established as feature tussocks in a garden, little maintenance is necessary apart from weed control.

When used as a landscape planting for colour contrast, little maintenance is needed once the area has become dominated by T. triandra. Burning in the early autumn once every few years can assist in retaining T. triandra dominance.

Weed control is easiest in areas with low soil fertility so that the use of fertilisers in the establishment of kangaroo grass stands is not recommended. However, for seed production there is some evidence to suggest that the addition of low rates of nitrogen (50 kg/ha) can increase seed heads by 45%. In other circumstances the addition of fertiliser appears not to benefit T. triandra.