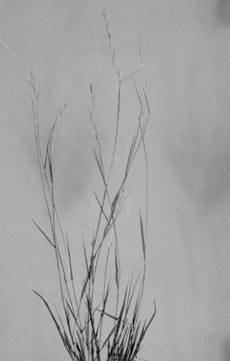 Microlaena is a tufted perennial grass that produces year round green growth and produces high quality feed (10 to 27% crude protein) that is also highly digestible (55–80%). Microlaena responds positively to increases in soil fertility, is tolerant to acid soils, drought and frost. The Department of Botany at the University of New England, Armidale has bred three varieties and registered them under Plant Breeders Rights Legislation. A relatively short, attractive variety, Shannon, is ideal for use in roadside, parks and golf courses because of its low maintenance and drought tolerance. The second is Griffin, a fine-leafed, prostrate turfgrass variety. A third pasture variety, Wakefield, is characteristically more upright and has been selected for a high leaf to stem ratio.

Characteristically microlaena has slender weeping seed heads, giving rise to its common name 'weeping grass'. Microlaena has leaf sheath junctions that bear a hairy auricle (Auricle - appendages at the leaf-blade/sheath junction of some grasses. Auricles are usually in pairs but only one may be present and this is termed the sheath lobe). Flower heads are compact and the spikelets (Spikelet - consists of one or more florets and is the basic unit of the inflorescence in grasses) bear two sterile lemmas (Lemma - the outer bracts at the base of a grass spikelet; usually two glumes are present) each with an awn about 20 mm long. The growth habit of this species is quite variable, from prostrate to erect.

Microlaena occurs naturally from the mountains of the Cape York Peninsula through New South Wales and Victoria to Tasmania, as well as in the wetter coastal districts of South Australia and the south west of Western Australia. Within that vast range, the abundance of naturally occurring microlaena varies enormously. It is not known how widely the three registered varieties can be used within the area of adaptation of naturally occurring microlaena.

Microlaena can be sown on a wide variety of soil types provided the pH is less than about 5.5. Naturally occurring microlaena is more abundant the more acid the soil down to a pH of about 3.9. Areas to be sown to microlaena should not be treated with lime.

Microlaena occurs with a wide range of other species throughout its area of occurrence. As Shannon tolerates shade, it can be grown in areas with scattered trees. Wakefield will be most useful when sown into degraded improved pastures which consist mostly of annual grasses, particularly where soil acidity has become a problem. Griffin produces a fine, soft turf and does particularly well in shaded situations. However, the soil pH must be below about 5.5 and overwatering must be avoided.

The seeds begin to ripen in early December and depending on soil moisture conditions will continue to do so until late April or early May.

Vacuum harvesting has proved to be the most successful method of only removing mature spikelets but brush harvesting can also be used particularly if the crop has matured evenly. The rotation rate of the brush should be reduced when harvesting microlaena otherwise the seed sample will contain many immature and incompletely filled spikelets. It is not known how easy it is to manipulate seed production by irrigation but it is anticipated that up to three separate crops could probably be harvested within the one summer. Seed yields are high and up to 700 kg/ha have been obtained with a vacuum harvester from small plots of about 225 m².

Cleaning microlaena samples can be difficult because of the tendency of the seeds to stick in the holes in sieves. This problem can be overcome with appropriate equipment and empty and partly filled spikelets can easily be separated from the full ones using aspiration. The removal of awns (Awn - an elongated bristle-like appendage attached to the apex, back or base of the glume, lemma or palea) so that the seed will flow easily through sowing equipment is a more difficult problem and suitable equipment has yet to be used on a commercial scale.

Seeds should be dried at relatively low temperatures immediately after harvest and, based on presently available evidence, if a force draft drier is used, the temperature should not be above about 38°C. Microlaena seed has very little dormancy and will germinate a couple of weeks after harvest. Seeds should be stored in a dry place at ambient temperatures and away from sunlight and vermin.

Microlaena seeds will germinate in any month of the year in most Australian environments. However, mid winter sowings in cold-climates should be avoided as germination is very slow if the soil temperatures are much below 10°C, In addition, mid-summer sowings should also be avoided because of the difficulty of keeping the seedbed moist long enough for the seeds to germinate. Seeds will take from 7 to 15 days to germinate depending on the soil temperature at sowing time. Microlaena seeds can be sown dry and will remain viable in the soil for up to three months until soil water becomes available. However, if sown dry germination can be patchy with some seeds continuing to germinate with each subsequent fall of rain.

Conventional seed boxes have proved unsuccessful as the scabrid awns cause major problems with bridging and seeds clogging the delivery tubes. Specialised seed boxes such as those made by B&S Engineering in Pittsworth, Queensland, have proved successful with untreated seed although this equipment will not sow the seeds evenly in drill rows. Further work on de-awning or pelleting is proceeding. Untreated Shannon and Griffin seed can be sown using hydromulching equipment for large areas or slopes. The fibre mulch should be at least 20 mm thick for the best results. For small areas, seed can be broadcast by hand and on steep slopes covered with a fibre mat to keep the seed and soil in place until the groundcover becomes established.

Microlaena seedlings develop slowly following germination. It is very important to protect them from competition from annual weed during this establishment phase. It is therefore best to try to eliminate weed problems before sowing. Field experience with different herbicides is still limited for microlaena but information is gradually becoming available. A brief but heavy grazing (not more than two days) with wethers about six weeks after sowing will reduce shading by weeds and encourage Wakefield plants to tiller. Subsequent crash grazings of Wakefield may also be useful to assist the plants to become well established and to increase ground cover and reduce further weed seed germination. Weed growth can also be slashed above the Shannon to prevent the weeds from seeding.

The growing period of Shannon is from the spring through to late autumn with a peak in February/March if soil water is available. If the Shannon has been allowed to seed during the autumn and is not slashed after seeding, then the leaves and the dead stalks will die off during winter, but the plants will remain green underneath. Where a heavy growth of Shannon has occurred during the summer and autumn it is often better to slash it in the early winter to allow the new, green growth to come through.

Shannon in relatively frost tolerant but the leaves can be damaged under severe conditions. Close and regular mowing can increase frost tolerance. In many environments where frosts are not severe it is green throughout the winter although its main growth period is from spring through to the late autumn. Even if Shannon is slashed regularly and closely during the late autumn, the leaf tips may be killed by severe frosts, particularly if the soil is dry.

Shannon can persist in soils of low fertility but has the capacity to respond to increased nutrient levels. Naturally occurring microlaena is commonly found in very high soil nutrient situations such as on the margins of sheep camps.

Griffin seedlings rapidly develop a strong root system and can be mown six to eight weeks after sowing. The initial mowing should be at least 60 mm or the young seedlings will be damaged. After the seedlings have tillered, the mowing height can be reduced to about 20–40 mm and the turf should be mown weekly during periods of rapid growth for best results. Mowing frequency can be increased during the winter or during dry times when the growth slows down.

Griffin can persist in soils of low fertility but has the capacity to respond to increased nutrient levels. Sulphate ammonia can be applied periodically, particularly if the soil pH is too high, to increase soil acidity and thus favour the microlaena. Griffin is relatively frost tolerant but the leaves can be damaged under severe conditions. Close and regular mowing can increase frost tolerance. In many environments where frosts are not severe it is green throughout the winter although its main growth period is from spring to the late autumn. If Griffin is not mown regularly and closely during the late autumn, then the leaf tips may be killed by severe frosts during the winter.

The growing period of Wakefield is from the spring through to late autumn with a peak in February-March if soil water is available. If good rain occurs in January, microlaena can become dominant in February and restrict clover growth in the subsequent autumn break. Heavy grazing in February can reduce microlaena dominance and allow clover to come through if it rains in late February or March. The main seeding of Wakefield occurs in February/March if rain falls in the middle of summer. Sheep that are to be shorn at this time should not be grazed on seeding microlaena pastures because the seeds may contaminate the wool.

If microlaena is sparse, then absence of grazing in February and March will encourage seed production provided soil moisture is available. Graziers have reported microlaena first appearing along sheep tracks when spreading into a paddock and grazing by sheep when the seeds are mature would appear to assist seed dispersal.

Wakefield is relatively frost tolerant but the leaves can be damaged under severe conditions. Close continuous grazing increases frost tolerance. In many environments where frosts are not severe it is green throughout the winter although its main growing period is from spring to the late autumn. If Wakefield is allowed to grow rank and seed heavily during the late summer then a short period of grazing with high stock density or a cool, fast fire can help break down the old, dead growth and allow the new leaves to come through.