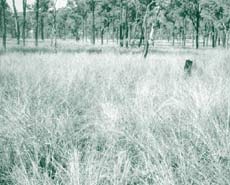 Heteropogon contortus is a perennial tussock grass that grows up to 1.5 m tall though it is rather variable in habit. Leaves and stems are green to blue-green and usually hairless or with only a few scattered hairs. The leaf sheath and blade are folded along the mid-rib and leaves are 5–30 cm long. The seed heads arise singly or in pairs from the axils of the upper leaves. The spikelets (Spikelet - consists of one or more florets and is the basic unit of the inflorescence in grasses) are paired, with one member of each pair being fertile, the other being male or sterile. The fertile spikelet bears an awn (Awn - an elongated bristle-like appendage attached to the apex, back or base of the glume, lemma or palea) 5–12 cm long, the basal part of which is twisted. The awns of the spikelets in a seed head intertwine at maturity.

The genus Heteropogon has six species distributed in tropical and sub-tropical regions of the world. H. contortus is a typical species of Australian tropical and sub-tropical tall grass vegetation, growing as an understorey in Eucalyptus spp. woodlands and open forests. The species is found in far northern New South Wales, across northern and eastern Queensland, across the Northern Territory and in the far north of Western Australia. It is most abundant where the average annual rainfall is 600–1000 mm and where there are marked wet and dry seasons.

H. contortus grows on a wide variety of soil types. Surface textures of soils supporting H. contortus range from sandy loam to clay loam and soil profile morphology plays a minor role in determining distribution. It can grow on infertile sands and texture contrast soils but also on very fertile clay loams. It is much less common on some heavy clay soils, soils with poor drainage, under conditions of extremely low fertility and in saline situations.

Where it is found, H. contortus is most abundant in the understorey of various eucalypt woodlands and open forests. The dominant overstorey species include silver-leaved ironbark (Eucalyptus melanophloia), narrow-leaved ironbark (E. crebra), spotted gum (E. maculata) and blue gum (E. tereticornis) in Queensland and E. tetradonta and E. dichromophloia in the Northern Territory. Kangaroo grass (Themeda triandra) is a common associate of H. contortus. Other grass genera that commonly occur with H. contortus are Bothriochloa, Eragrostis, Aristida, Chloris and Chrysopogon.

Plants are largely dormant during the cooler, drier months. Vegetative growth begins when both temperature and soil moisture levels are adequate. In the north, low soil moisture limits growth during the dry season and growth begins with the first major rains. Reproductive development may begin in early February and seed set from late March. In the south, soil moisture may sometimes be adequate during winter but low temperatures limit growth. Most growth generally occurs between mid-October and mid-April. Flowering occurs from late January and seed is released between March and August. H. contortus can produce over 5000 seeds per square metre.

This species has been successfully harvested using both brush and beater harvesters.

Under natural conditions, seeds are probably relatively short-lived. When stored under air-dry conditions, more than 50% of seeds remained viable after three years but less than 5% were viable after four years.

There is evidence that H. contortus benefits from disturbances that reduce the competition faced by seedlings. Burning in spring tends to be associated with an increased contribution of H. contortus in the pasture. This is due in part to removal of competition.

Many areas that came to be dominated by H. contortus were dominated by Themeda triandra prior to the introduction of domestic stock. This suggests that H. contortus is relatively tolerant of grazing. Under continuous heavy grazing however, H. contortus declines. H. contortus is most susceptible to grazing in the early part of the wet season. One recommendation for long-term maintenance of H. contortus pastures, is that utilisation rates not exceed 30%. Fire can be a useful tool for control of shrubs and less desirable grasses (e.g. Aristida spp.). Burning in spring every 2–4 years may be helpful but a burning programme should be tailored to specific circumstances.