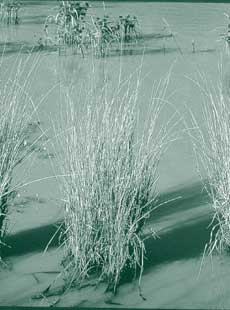 Paspalidium jubiflorum is a warm-season perennial that is favoured by livestock. It is reported to provide useful forage even after it has hayed off (after frost or insufficient soil moisture), possibly due to it retaining some seed. Irrigation has been used to successfully prolong its growing season. Large amounts of seed are produced but it progressively falls as it matures. A 'seed litter' is often present in a good stand of the grass at the end of its growing season.

Tussocks are leafy and usually 30–130 cm high. Populations in eastern NSW are at the lower end of the height range and have broad tussocks and short flowering culms (Culm - a grass stem), whereas those along western watercourses are more erect and have longer flowering culms. Leaves are smooth, up to 25 cm long and have a small hairy ligule (Ligule - a membrane or hairs found on the inner (adaxial) surface of the leaf-blade/sheath junction). The flowering culms are unbranched and support a narrow panicle (Panicle - a compound or branched raceme) of up to 16 widely spaced 'spikes' (Spike - an inflorescence with spikelets attached to the axis with no stalks. In grasses, lateral branches may be termed spikes), each 1–4 cm long, which are pressed against the stem. Flowering usually occurs over an extended period from summer to autumn.

Paspalidium is essentially a tropical genus but extends to temperate regions in Australia where there are 22 species and most are believed to be endemic. Earlier reports, however, suggest that some species, including P. jubiflorum, are also native to other parts of the world such as India. It is often found growing in waterways or in areas that receive periodic flooding. P. jubiflorum occurs in all mainland states of Australia, even in areas with a predominantly winter rainfall. It is uncommon at high elevations where it tends to have a shorter growing period than elsewhere.

Although occurring on a variety of soil types and situations, it is most productive on heavier soils in lower slope situations. In drier areas it is largely restricted to swamps and watercourses, where it can survive periods of inundation.

As seed ripens unevenly, and new seed heads are produced throughout the season (presumably in response to rain or flooding) and most seed falls off at maturity, a stand should be harvested more than once to maximise seed yield. Seed ripeness is indicated by a change from green to straw colour and easy removal by hand.

As P. jubiflorum tends to 'collapse' after seeding it can be difficult to effectively harvest with some brush harvesters. Harvest timing is critical as harvesting immature seed reduces the germination potential of the seed batch. Similarly, more vigorous brushing (stiffer brushes or increased brush speed) reduces seed quality by increasing the amount of immature seed collected. Seed has sometimes been collected during the harvesting of lucerne seed in Central Western NSW and separated during subsequent screening of the lucerne seed. Seed harvested in this manner will contain variable amounts of weed seeds.

As the seed is round and lacks awns (Awn - an elongated bristle-like appendage attached to the apex, back or base of the glume, lemma or palea) and hairs, cleaning is easily accomplished using appropriate screens with light aspiration to remove light, small or infertile florets (Florets - the flowering part of a grass (includes the lemma and palea); the term is also used if some parts are absent and can refer to a lemma only). Very little processing is needed if stem material is not collected at the time of harvest.

Ripeness at harvest affects the seed germination measured after one month. Values of up to 80% have been reported for mature brush harvested seed, but it is not uncommon to collect seed with a germination of between 0–15%. Seed germination increases up to about 18 months after which time it appears to decline rapidly.

Weed control is critical and should be commenced at least one season before sowing. Seed is sown at a shallow depth (or on the surface of a loose seedbed and pressed in) in early spring and best results have occurred in well-prepared conventional seedbeds. In terms of emergence, P. jubiflorum is amongst the most reliable of the spring-sown native grasses. In areas where it is common, it has been reported to recruit naturally in a wheat crop and in cattle dung following good warm season rains.

Clean seed can be sown in a conventional small-seed box. A seeding rate of 200 live seeds/m of rows has been successful but this rate could probably be halved under ideal conditions. P. jubiflorum has also been successfully sown using the crocodile seeder as well as broadcasting.

Stands will thicken up if rested over summer, particularly if the growth of cool-season species has been checked by grazing or applying herbicides before P. jubiflorum resumes its growth in spring. If seed from a previous season is present in the soil, 'thin' stands can be rested following good rains in spring or early summer to allow new seedlings to develop. Grazing of seed heads by cattle is reported to assist the spread of P. jubiflorum.