Paintings of insects by EH Zeck 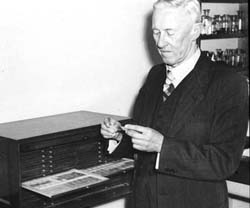 Emil Herman Zeck, born November 1891 in Sydney, showed artistic skills at an early age. In 1908, as a sixteen year old, he was chosen to join the Government Printing Office as a Cadet Art Draftsman - for the princely sum of £75 per year. He went on to become their entomological illustrator but left in 1923 to join the then NSW Department of Agriculture Entomology Branch. (NSW Department of Primary Industries incorporates the former NSW Department of Agriculture.) Zeck, who had actually been preparing illustrations for that Branch since about 1914, remained there until he retired in 1956.

Although he was a prolific writer, Zeck is probably best remembered for his great skills as an entomological illustrator. He produced more than 2000 insect drawings, many of which were published to illustrate entomological articles in the NSW Agricultural Gazette. Most of his work was in black ink, but he produced a series of fine watercolours, first revealed to a fascinated public as part of the Entomology Branch carriage on the Department's "Better Farming Train" which toured New South Wales in 1927. All of his illustrations are stored in the Agricultural Scientific Collections Unit in Orange, NSW and are protected under the Agricultural Scientific Collections Trust Act 1983. Ownership is vested in the Scientific Collections Trust.

Zeck was also highly regarded for his exceptional entomological abilities and he exercised considerable influence on entomology over a wide area. He had a particular interest in aphids. The 1961 award of the Australian Natural History Medallion was a  well-deserved if belated tribute to his life's work. Zeck died in 1963.

The following are examples of Zeck's coloured paintings.

You are permitted to copy these images for personal or educational use provided the copyright notice and name of the artist is retained. Any other uses of these images must be approved by the Curator of the collection in which these illustrations are archived. High resolutions scans of the images may be available on payment of a prescribed fee. Send details of your intended use to the Curator of Collections at biosecurity.collections@trade.nsw.gov.au