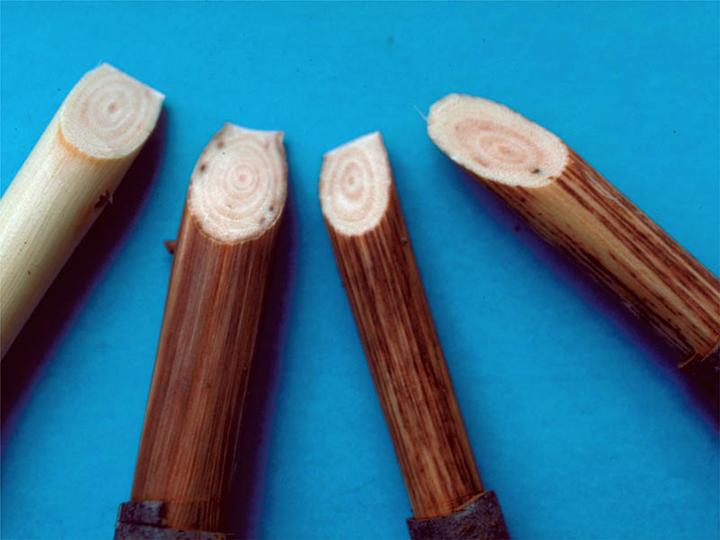 Dutch elm disease (Ophiostoma ulmi, O. himal-ulmi and O. novo-ulmi) are exotic plant pests not present in Australia. This disease is a serious threat to Australia’s garden and nursery industry.

Dutch elm disease is a deadly fungal disease that causes fatal vascular wilt in elm trees (Figure 1). It is one of the world’s worst tree diseases, killing half of all European elms and three quarters of North American elms since 1910.

Dutch elm disease is a notifiable plant disease in NSW.

Early signs of Dutch elm disease are leaf discolouration or drooping at the branch tips. The leaves yellow, curl, go brown and fall off. Defoliation spreads across the tree.

Branches and stems develop dark brown streaks in their sapwood before dying (Figure 3). Some elms then send up root suckers, which can live for 15 years after the initial infection.

When the fungi are spread by elm bark beetles, wilting starts at the top of the tree and moves downwards. Where trees are infected with fungi transmitted via natural root grafts, wilting starts in the lower branches and spreads upwards.

Infected elms plug the xylem vessels in their sapwood to stop the Dutch elm disease fungi spreading inside them. This also stops the flow of water and nutrients in the infected plant, causing vascular wilt and eventual tree death.

Dutch elm disease fungi also make toxins that cause plant wilting. The three fungi can be rated by the damage they inflict. The O. novo-ulmi fungus is rated more deadly than O. himal-ulmi or O. ulmi, due to its higher toxin production, tree defoliation and host colonisation abilities.

As the elm bark beetle’s breeding chambers penetrate the xylem vessels, the fungi grow into them. They produce spores which inoculate the bark beetles and complete the fungal lifecycle.

The Dutch elm disease fungi are also transmitted from infected to healthy trees through the natural root grafts that form between the interwoven roots of closely planted elm trees.

Dutch elm disease was first identified in the Netherlands in 1919. Hence the name “Dutch” elm disease. It has since been reported in Asia, Africa, Europe, North America and New Zealand.