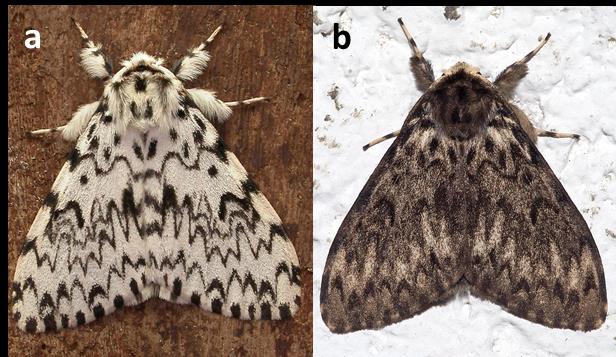 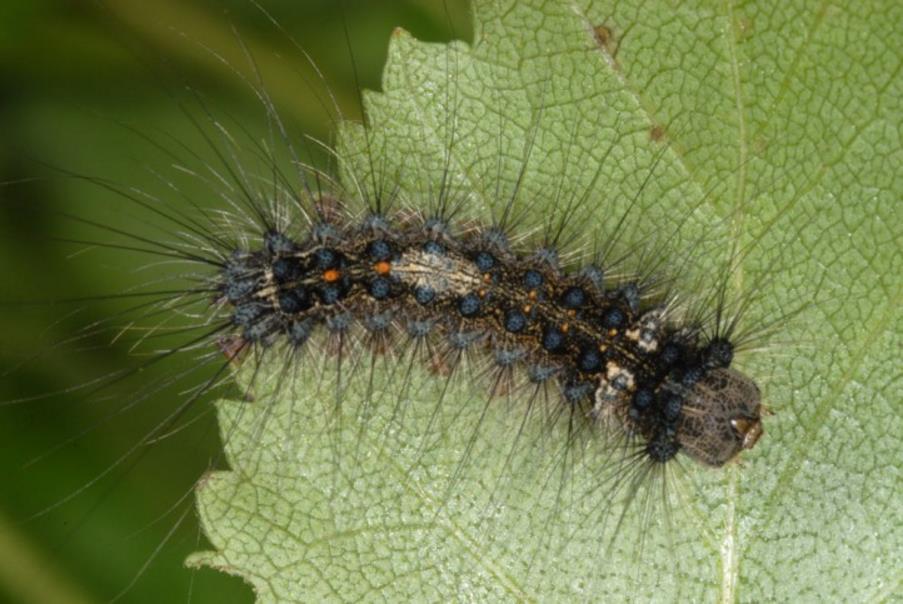 Nun moth (Lymantria monacha) is an exotic plant pest not present in Australia. This pest is a serious threat to Australia’s forestry and horticultural industries.

In countries where nun moth is established, the species undergoes periodic outbreaks every few years causing significant damage to forests. The frequency of outbreaks has increased from every 30 to 40 years to intervals of six years.

Female nun moths have wings that are longer and narrower than those of the male (Figure 1). The female wingspan is 45–55 mm whereas the male is slightly smaller at 35–45 mm. The colouring of both sexes is highly variable from white with wavy dark bands to almost black.

Nun moth larvae are very hairy and grow to 35 mm long. Mature larvae are mottled brown-black with a double row of bluish spots along the length of the body and two orange lumps marking the tail end (Figure 2).

Eggs are spherical, brown and 1 mm in size, deposited in masses in bark crevices or under bark scales or lichen.

Larval feeding damage on host plant leaves is the most obvious symptom of nun moth attack. Feeding damage appears as holes in the leaves or irregular leaf margins. As larvae grow, whole leaves may be consumed. Each larva consumes about 1m2 of leaves in its life time.

Large, eruptive populations of nun moth can occur in cycles every few years. Stress associated with feeding damage can result in reductions in tree growth, dieback and tree death. Tree death is often associated with other insects and pathogens that attack the stressed trees.

Nun moth larvae emerge at the end of spring after overwintering as egg masses. Newly hatched larvae generally remain on the egg masses for several days before climbing into branches to feed.

Larvae undergo 5–7 development stages while continuing to feed. Pupation occurs in the middle of summer on leaves and branches.

Adults emerge over the end of summer and beginning of autumn. Females generally produce a number of egg masses from one mating event totalling 70–300 eggs. Eggs are deposited in masses of about 40 eggs in bark crevices.  Adult moths do not feed and live for less than a week.

Nun moth is primarily a significant pest of timber production, including Pinus species, and other forestry trees.

In addition to forestry trees, other commercial plant commodities that host nun moth include apple, apricot, blueberry and pear.

Nun moths are dispersed naturally either by adults flying or, more commonly, by wind dispersal of young larvae on silk webbing. Larvae move into the branches of a tree, spin a thread of silk and suspend themselves from the threads which eventually break. The larva is then carried by the wind. While most larvae will not move more than 200 metres, some are reported to travel several kilometres.

Long distance dispersal of nun moth can occur with the movement of plant material infested with eggs or larvae, or on packaging and vessels. Adults are readily attracted to lights and have been observed in the vicinity of ports where they could lay eggs in or on structures to be transported.

Nun moth is native to and occurs throughout Europe and Asia.