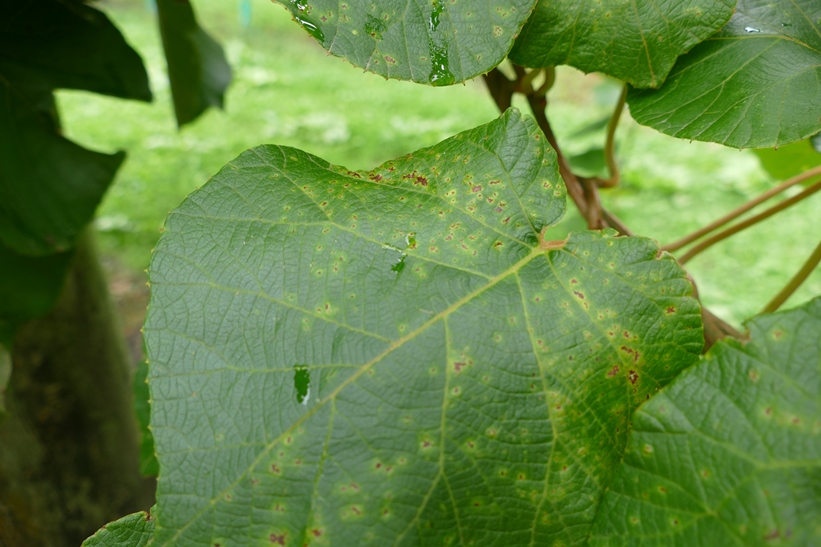 Pseudomonas syringae p.v actinidiae (PSA) was detected and confirmed in Australia on a kiwifruit orchard in Victoria in October 2018. The outbreak occurred in a non-production area of an orchard. Affected plant material was destroyed and containment measures put in place.

PSA does not present a risk to food safety or human or animal health.

The bacterial canker of Kiwifruit caused by PSA causes the death of kiwifruit vines. It first occurred in China and Japan in the 1980’s, then later in Korea and Italy in the 1990’s. Italy experienced a more severe form of the disease in 2008, along with other countries in 2010 and 2011.

The disease affects both green and gold fleshed kiwifruit. Overall effects of PSA vary depending on the disease strain, the vine type and prevailing weather conditions.

Strains of this disease can be grouped into five biovars based on their similar molecular, microbiological and pathogenic characteristics.

Early symptoms of PSA are brown spots surrounded by a yellow halo on the leaves and bud rot. Infection also leads to shoot dieback, wilting of buds, shoots and canes, cankers on canes, leaders and trunk and a milky bacterial substance oozes from natural openings or pruning injuries. As the disease worsens it mixes with the dark coloured bark tissue producing a red rusty exudate. This gives the appearance that the vine is bleeding.

The bacterium can infect host plants through injured bark or an existing wound from pruning. Infection can occur through leaf and trunk pores, leaf scars and roots.

Optimal temperature for the development of symptoms for bacterial growth on new cane ranges from 10 to 20ºC. Early detection of PSA becomes more visible when temperatures decrease.

PSA is the most devastating known disease of kiwifruit. It causes major economic losses by destroying a vine or entire orchard in only a few seasons.

Infection is followed by massive propagation of PSA within the vine causing severe damage and eventual death of the whole vine.

Over short distances PSA can be spread by strong winds, heavy rainfall, grafting and animals.

During the spring PSA can spread systematically from the leaves to young stems.

There are currently no products registered in Australia to control PSA.

Ongoing research programs are aimed at understanding the origin and evolution of the various PSA strains with efforts being made to improve the tools available for correct identification of PSA.

If you suspect PSA: