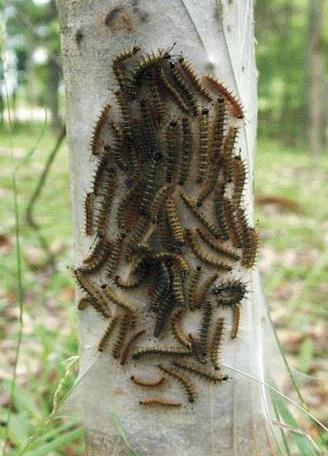 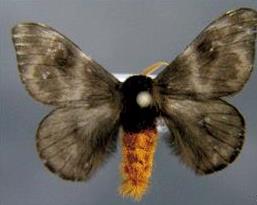 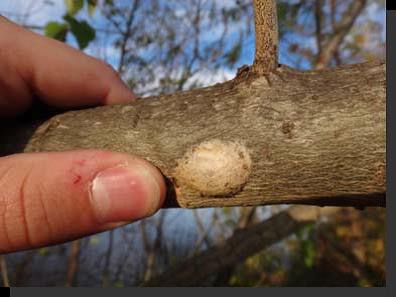 Burning moth (Hylesia nigricans) is an exotic plant pest not present in Australia. This pest is a serious threat to Australia’s nursery, forest and fruit industries.

Burning moth (Hylesia nigricans) is not a notifiable plant pest in NSW.

However, if you suspect Burning moth (Hylesia nigricans):

Burning moths have dark coloured bodies with  45 mm wide wingspans. They have golden hairs on the back of their abdomens (Figure 2). Female moths are black and male moths are dark brown.

The caterpillars have black and yellow bodies covered in golden hairs. Fully grown caterpillars are 40 to 45 mm long.

Whitish, cylindrical eggs are laid in overlapping layers inside the yellow, hairy cocoons made by the female moths (Figure 3).

Burning moth caterpillars feed on a wide variety of amenity, forest and fruit trees. As they multiply rapidly and feed in groups, the caterpillars can defoliate entire trees.

Burning moth is also a serious public health pest. Its sharp, golden body hairs contain the chemical histamine. When the needle-like hairs come in contact with human skin or are inhaled by susceptible people, they cause severe allergic reactions.

Female burning moths also shed their hairs. The irritant hairs are blown about by the wind and can contaminate exposed surfaces. Moths flying near external lights may shower bystanders with hairs.

Burning moths complete one lifecycle in a year. They have four lifecycle stages: eggs, caterpillars, pupae and moths.

Female moths lay their eggs in January and February. From February to October the eggs overwinter before hatching during October and November.

After hatching, the caterpillars move and feed in groups, causing the defoliation of infested trees. Between November and December the burning moth caterpillars disperse and feed individually.

The caterpillars build their pupal cocoons in host trees with leaves and sticks. They pupate inside their cocoons before emerging as adult moths in January and February.

The female moths live for five nights after emergence, when they mate and lay their eggs on nearby host plants.

Burning moths feed on a wide range of native and introduced amenity, forest and fruit trees.

Burning moth is a native insect of Argentina, Brazil and Uruguay. It lives in the coastal humid sub-tropical and temperate regions of these countries around the 35°S latitude.