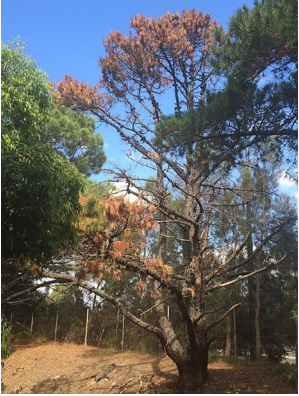 Pine nematodes include nematodes of the genus Bursaphelenchus. Some species of this genus are exotic plant pests not present in Australia. These nematodes are a serious threat to Australia’s forestry industry.

If found they must be reported promptly by one of the following methods:

Pine nematodes are microscopic, wormlike organisms. They are invisible to the naked eye and require technical expertise and molecular methods for identification.

How to spot a tree infested with pine nematode

The first symptoms of a pine nematode infestation include brown and dry needles in the tree branches.

Tree death usually progresses from the top of the tree downward.

A serious nematode infestation can result in rapid dieback of the pine tree, sometimes within a few weeks.

Many pine trees normally have dead needles present in the canopy and the odd dead branch. It is considered relatively normal for up to 15% of the tree canopy to be affected by dead tips or dead older needles caused by environmental factors other than nematodes. Suspected nematode presence needs to be confirmed by a technical expert.

Most species of Bursaphelenchus feed on fungi and don’t cause direct damage to the host tree. However, there are a few species in the genus that are known to feed on plant cells. In these cases, damage caused by pine nematodes can lead to rapid tree wilt and death.

Pine nematodes move through infested host trees in the water transport system. Nematodes feeding on plant cells cause air pockets to form, disrupting water uptake by the tree. Death of the tree is rapid, often within a few weeks or months.

Most pine nematodes are carried from infested trees to new host trees by vector beetles. A number of beetle species belonging to the Scolytidae, Cerambycidae, Curculionidae, and Buprestidae families are known to vector pine nematodes.

Pine nematodes and their beetle vectors can be spread over long distances with the transport of conifer wood chips, logs, unseasoned timber, untreated wooden pallets, crates, packing-case material and dunnage. The pine nematode has two lifecycles: one completed inside the host tree and one inside the vector beetle (Figure 2).

In the host tree, the lifecycle occurs in the sapwood and involves the egg, four larval stages and the adult. A complete cycle can take only 4−5 days under favourable conditions.

Infestation of the vector beetle occurs after tree death. Nematode larvae infest beetle pupae present in the tree and undergo a non-feeding larval stage for transport. These larvae enter the respiratory system of the young beetle when it emerges and are vectored by the beetle to new host trees.

Bursaphelenchus nematodes are found in the Mediterranean countries of Turkey, Greece, Spain, Italy, France, Portugal, the Asian countries of Japan, South Korea, Taiwan and China as well as the USA, Mexico and Canada.

Control of pinewood nematode is limited to prevention. Chemical control is impractical, expensive and ineffective.

Infested trees should be removed. Dead trees, including the stump, should be burned or buried as soon as possible.

If you suspect pine nematodes: